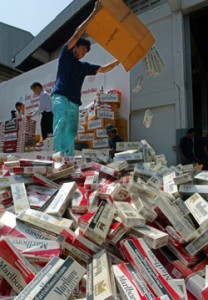 The Government must be feeling the pinch with all these righteous folks giving up smoking. Revenues from tobacco are dropping.

Justine Greening, Economic Secretary to the Treasury, has hit on a cunning plan.

He has signed an agreement with British American Tobacco which requires them to make substantial annual payments to the British Government and the EU if their product is smuggled.

So, if they can’t get the excise revenue legitimately from the retailers, they will strong arm it from the manufacturers.

“These agreements are an important step forward in the fight against tobacco smuggling. Signing them sends a clear and consistent signal that we are working in step with the EU, other Member States and tobacco manufacturers to tackle the illicit trade in tobacco products.”

No it doesn’t Justin! It sends a clear and consistent signal that you are losing the battle to stop tobacco smuggling so have hit on a new route to get the revenue you are so fond of.

Drop the tax rate and you will cure the smuggling problem.

Sorry to be completely thick. But, if I understand this pioneering penal
policy correctly, it goes something like this:

Let’s say I smuggle some baccy into Britain. Then the govinmint responds by
not punishing ME but punishing the BACCY FACTORY.

So, logic says that our Coalition could well extend this penal philosophy
to the following crimes:
– CRIME: A lady gets mugged by some
youths
COALITION PUNISHMENT: Imprison the victim’s Mum because she was
responsible for bringing the the crime’s target into this world. But, whatever
you do , do not punish the muggers, no way, no siree, they’re a protected
species.

So where are we going with this?

If there was ever an example of the blinkered, useless, out of touch 21st
century politician, this is it. (And I hate it when people quote “21st
century” to support their arguments).

God, I need a fag after reading this. Can anyone suggest a good smuggler
near manchester?

And when most of the smuggled baccy comes from China, what then,
Nuke
Beijing.

Border Guards clamping down on 50Gramme pouches of Golden Virginia
what
a laugh,gottta be a joke,they cant even sus out 12 stone Somalis

Since my mum took a copy of Le Monde every day, I noticed 2 years ago
(Beijing Olympics) that the French were still referring to Beijing as Pekin
(with an accent but I can’t work out how to get one for fear of doing
punctuation-somersaults). Why did we have to stop calling it Peking and the
French didn’t have to?

.. and “Mumbai” replacing “Bombay”. According to our wonderfully
diverse and anti-English BBC in a Radio 4 thing the other day, most
Bombayans still refer to their city as “Bombay”.

Methinks there are some very silly, impresionable people in the city
renaming industry. Why can’t they rename Scunthorpe instead. I quite liked
the sound of Peking, especially the duck.

And yet we call Koln Cologne and Roma Rome? Those ethnic Germans and
Italians must be seething at us.

To have our own name for a foreign city is really a compliment to
it. It is pleasant to hear about Londres and La Tamise, and to know
that they are part of French conversation, and not just foreign news
reports.

In other words because sales are down, tax income is down so they can’t
afford any more bans. That’s how I see it anyway.

God, I miss smoking! Nearly five years now but the memory lingers on. And I
miss those occasional trips to Adenkirke in Belgium, where every building is a
fag-shop.

We’d leave at about six in the morning, drive to Adenkirke, buy enough fags
to last a million years, have a pint in the pub (the Rovers Return!), and
drive back. Home round about nine, knackered but having secured our essential
supplies. And full of pride, that we’d cheated the taxman out of his tawdry
levy on a pleasurable activity.

Thank God they never discovered how to tax sex.

They’re working on it. I’ve heard that we’ll all get taxed on a weekly
average, even if you don’t, ever.

Well, if they are taxing me, I can claim a rebate!

As was said before: Drop and lower the tax and excise rates and smuggling
will stop. Is that so difficult to understand? But ofcourse its all about
punishing the “evil” smoker, isn’t it? Smuggling is freemarket principles in
action! Tobacco control movement, hypocrisy!!!

I had a very interesting conversation the other week with a chap whose job
it is to catch tobacco smugglers in Grimsby. According to him, the huge bulk
of illicit tobacco entering the UK comes from Russia, is produced there and
has nothing to do with BAT.

I could murder a tab and a pint of Guinness
Gildas

Hmm and they keep telling us these cheap fags are full of arsenic and rat
droppings because they aren’t produced by the big tobacco companies. So who’s
gonna pay the tax on those?

There’s a lack of detail here. Never mind if it’s Justin or Justine, but
how could this work? Obviously smuggled goods, by definition, are undetected
by Customs, so what is meant by this?
Buying fags abroad and bringing them
back into the UK is not illegal (yet), so I fail to see any how this could
work.

Ed P,
I can only assume that they are going to deduct the number of
cigarettes that various EU countries have paid tax on from the number
manufactured by BAT, and charge them the difference.
The lack of detail
is because the agreement has only just been signed today – you read it here
first…….

But tax WILL have already been paid on them.

It may be French, Spanish or whoever’s, just it will certainly not be
British.

Maybe Boy George ought to ask that nice little Sarkozy chap for his
money back. I’m sure the dosh would be forthcoming in an instant.

I read this notice from HMRC. The amout to be paid depends on
the quantity found to be smggled. For commercial reasons BAT know the size
of their market very accurately (flat or declining in the developed world)
and so if an enterprising smuggler places a large order in Bogistan its
local agent will calculate that as that quantity couldn’t be smoked by all
Bogistan’s beagles puffing flat out 24/7 and must be intended for export
to a lower tax/duty country.
So getting the fag maker to pay lost duty
is much cheaper than employing more customs men to search for contraband
tobacco.

What about Imperial Tobacco? Gallaher? and all the other EU
companies? …. not to mention non-EU companies. lt’s nothing but a bloody
joke.

“Drop the tax rate and you will cure the smuggling problem.”

And why to the EU? Presumably the deal is to eliminate the tax difference
lost to the UK exchequor by smuggling, but what’s that got to do with the EU?
Clever way of getting their fingers into Britain’s tax-raising pie,
perhaps?

Justine… justine… the clue’s in the name! She’s a woman!