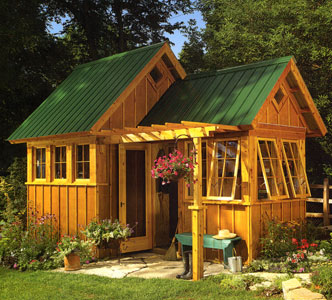 Man in a Shed bought back a few memories the other day. We had a neighbour on our stretch of the riverbank in Shropshire who had a minute cottage, truly minute, and a very talkative wife. The house was pin neat, a confection of sugary wallpapers and acres of busy lace, Victorian dolls lined the narrow stairs. At least half of his garden, a proportionally minute garden, was covered by the relic of a battered garden shed, though it didn’t truly justify the label of shed. More a collection of tarpaulins and redundant farm gates to hold them aloft. Underneath this rudimentary shelter was virtually everything that anyone in the village had ever thrown away.

“Could Mr G”, he enquired one morning, “possibly clear this mess for him, and replace it with a simple garden shed to house his lawnmower”? His wife, he explained, wanted more garden space to grow roses.

Mr G obliged, and as the land was cleared, and the rubbish removed, our neighbour came out to survey the space. “Have you bought the shed yet” asked Mr G. “Not yet” he replied, “I was thinking of 6 x 6, but now I see the space, maybe something a little larger, and they don’t seem to stock larger; could you build one for me”?

Between them, they marked out an area around 12 x 12, and Mr G dug the footings. The next morning he returned to find our neighbour surveying the scene. “I think its still a bit too small for what I have in mind; let’s move those pegs a bit”. The prospective shed doubled to 12 x 24. Mr G sighed and commenced digging once more. He started to throw the soil into the redundant 12’ trench. “No, no” cried our neighbour, “leave that, we shall have a wall down the middle”. Trenches dug, Mr G returned home.

Next morning he found our neighbour once more ‘on site’. “I want to make a connecting bit, just here” he said, pointing to the side door of the house, “I could connect up a loo, there’s a toilet just inside the door”. Mr G dug on. Finally satisfied, the concrete was mixed and the footings filled.

“I’ve done you a drawing of what I want” he told Mr G. “How long would it take you”. Mr G surveyed the drawing and the elaborate windows, and pronounced his sentence. About 3 weeks. “Make it in two weeks and you can name your price” said our neighbour.

The floor was waterproofed, and the insulation our neighbour insisted on was laid; as the walls went up there were constant changes to the plans. Mr G swore and recut wood on a daily basis; now the walls were to be insulated; double glazed windows were provided for him to fit. When it came to the roof he was instructed to fit a vent for a woodburner. Slate tiles were to be laid for the woodburner to sit on. The walls were lined with plasterboard and Mr G instructed to find a plasterer to render them smooth and faultless.

The GPO turned up midway through the second week to connect the phone and broadband. The electricity board arrived to connect the power. Our neighbour busied himself painting the interior in Shaker style of plain colours, beige, and taupe, and white. Once finished, a man in a van arrived with a delivery from Ikea. A desk in blonde wood, a decidedly masculine office chair, a rug in Swedish grey.

“Perhaps Mr G could add a terrace to the front so that he could admire the river” he asked? Mr G could and did.

Three weeks after the original conversation, our neighbour’s wife returned home from her annual stay with her Mother and surveyed the scene. Did I mention that her Mother had arrived with her?

We would have asked our neighbour what she thought, but by that time he had bolted himself into his shed and could hear no one. Fortunately he had already paid us, for I doubt that what we had constructed was within ‘permissible development’ but he was a happy man.

It’s still there, one man’s monument to the need to have somewhere to escape to, to a life that is not ruled by others, by a domestic rod of iron and lace and constant chatter.

It occurs to me that many blogs fulfil that role, a world that is just yours. Decorated as you see fit, peopled by those you find both inspiring and entertaining.

Years ago, man had his pigeon loft, his potting shed; a place to bury the bottle of sherry his wife disapproved of. A place where he and his neighbour could use the language disapproved of at home. A place to store the lengths of string and useful piece of metal that would surely be thrown out of the family home. A place to dream that he had become the person he always wanted to be.

Perhaps the blog had to be invented as the island grew more crowded. The blog as marriage rescuer – now there’s a thought. There’s a Thesis in there somewhere.

Mr G went on to temporarily become the Shropshire Shed King, constructing sheds the length of the county, It seemed as though everyone wanted one.

my whole house is a shed, seven bicycles, two engines ,a lathe, a still,
tools by the cwt, im divorced from my quaker educated wife these past fifteen
years,and im enjoying my old age cheers hic

Truly delightful. Thanks yet again.

Never come between a man and his shed. Where else (now pubs are
disappearing rapidly) could you find solace & escape from domestic
bliss?
Mine’s full of “useful” things I’ll never ever use – just having
them there is fulfilling in some strange way.

Its ironic that as I read that peice, I am well underway with my attic
conversion where I am going to have my drum kit. Hmmm…..

I wish I had a shed/bolthole. Maybe once we move to another house I’ll get
one built.

As usual this blog prompts another weird and wonderful google search.

This is a fantastic piece, except for the pigeons.