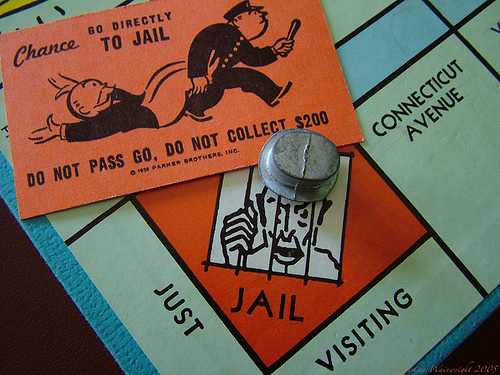 I see the politics of prison are back in the news again.

As a fairly strict libertarian, I am faced with the apparent conundrum of having to support some agency, whether it be the state or some other agency depriving someone of their liberty. But the reality of it is that there is no conundrum at all: if Person A does Person B some harm, then they need to be punished. This could be harm to their person, their possessions , their reputation. The punishments for these should vary on the nature of the harm done, but for certain severe crimes it is quite reasonable to lock someone up for an extended period. For particularly severe crimes, taking someone out of society forever is an entirely reasonable sanction. I would draw the line at the death penalty, because it is possible for people to be wrongfully found guilty and freed — it’s very difficult to reverse a death sentence!

The real debate here is not about the need for prison, but the issue of recidivism: what happens with people who repeat criminal activity. Many “bleeding hearts” and wringers of hands will claim that sending anyone to prison merely encourages them to follow a life of crime. There is much talk of “rehabilitation”, but really, this is a nonsense. We live in a society full to the brim with opportunities to learn useful skills, there is little need for prisoners to be “rehabilitated” through any special program.

It is true that most people will have a reluctance to employ a former jailbird, but that is part of the natural ostracisation that comes about when you transgress. It is surely up to the former criminal to redouble their efforts to find a way to prove their worth and earn the right to come back into society. And many do.

These people are “good news” and as such, are not newsworthy and enjoy no headlines in the papers. It may well be that some “rehabilitation” programs have benefit, but for the most part, people are either inclined to criminality or they are not. It is extremely rare in the UK that a first offence will get you jail time, so the chances are that if you have been to jail, you are predisposed to criminal activity and have had lesser punishments applied to no avail, or your first offence was particularly severe.

The pure and principled Libertarian position is that each offence should really be treated separately, the idea being that if you have done your time, society should consider you punished and the slate should be wiped clean.

But I’m not sure that this principle takes cognisance of human nature. Studies have shown that crimes against property, such as theft and robbery have extraordinarily high rates of recidivism, in some cases as high as 80%. In other words, once someone has started on a path of property crime, they don’t stop. And it is at this point where my stance on jail time and that of pure libertarianism diverge: I fully support the idea of a “three strikes and you’re out” policy. I also firmly believe that a previous history of proven criminal behaviour should be considered when sentencing. Anybody can make a mistake once or even twice, but there comes a time when you have to accept that someone is not interested in going straight.

The Home Office estimates that half of our crime is caused by a hard core of 100,000 repeat offenders. By simply doubling the number of prison places:

The Tories may be winning plaudits from social libertarians for their soft touch policies, but the truth of it is that MPs will rarely, if ever, be on the receiving end of the tender ministrations of regular criminals and this is just an exercise in meeting budget targets with no likely consequences for Ken Clarke and his fellow members of the ruling class. The cost of building a mass of new prisons and running them is much lower than what crime costs us all.

If the government was serious about improving life for us and slashing the £40,000,000,000 that crime costs us all every year, they’d focus their efforts on doing the things they should do and not the things that make them look good in the Guardian.

So, what is the Thinking Tory to do? Well, she sits back while Clarke (he’s
a socialist after all) announces a plan that will see fewer relatively poor
people – yes, I know it’s their fault they’re relatively poor – locked up. The
inevitable result: crime goes up – Clarke’s fault – prison works – nothing to
do with socio economics.

So there you have it, more prison spaces in the long run and Libertarian
non-Tories happy.

On strictly libertarian principles, there is no justification for
punishment at all. If you receive recompense for your harm, you have no
further complaint against the offender. In essence, all crimes are treated as
civil torts.

The only way to provide for punishment over and above recompense is to
concede that *society* is harmed by criminals running around loose, and is
entitled to do something to stop them. Unfortunately, libertarians don’t
believe society as such has any rights.

Some years ago a policeman told me that only 8 hardened criminals were
responsible for the vast majority of crime in my area. I wouldn’t have been at
all upset if their body temperatures had been reduced to ambient in one fell
swoop. How many inadequates have they since turned into junkies and
opportunist criminals in their turn? Fear of the law is necessary in society,
and the ‘temporary experiment’ of suspending capital punishment (which of
course became permanent) has seen a burgeoning of crime. Re-instate capital
punishment and there might, just might, be a change for the better. With the
forensic sciece available today the odds of topping an innocent are
vanishingly small.

Bob, that reminds me of a distant relative of mine, who was sent to prison
for the criminal fact of refusing to do military service [yes, I

AR – “and this is just an exercise in meeting budget targets”

A ‘fairly strict libertarian’ eh? I’m not sure those three words are very
comfortable in such close proximity.
Most crime is committed by youngsters
or young men, and most of them are quite capable of growing out of it, given
half a chance.

Actually, I mean that I adhere to a fairly strict definition of the idea
of libertarianism. I’m not a “libertarian Tory” or anything like that.

Prison would cost the public nothing at all if the prisoners had to pay for
it through proper work. `

Prisoners should be on a full programme of real hard productive work which
which fully paid for their incarceration and also earned a little incentive to
save up for their release. In doing so they would gain a useful work ethic,
and perhaps a real training.

However there should also have to be a real incentive to do that work, ie.
if they refused to pull their weight, then they should only be fed bread and
water, or an equal subsistence only diet, with no television or other
niceties.

Television and other benefits should be an earned and paid for privilege
removable for every and any offense.

The yumanrites of offenders should be removed on the basis that they
elected to remove the Human Rights of their victims.

I agree with that, Bob. What is going on at the moment is utter
nonsense.
They’ve tried the kindness, consideration and rehabilitation
thing, and it just isn’t working with the majority of them. And those it
does work for would probably have managed on their own anyway.

But I do feel that it has to start at a younger age, and that parents of
recalcitrant teenagers must be held responsible in some way.

A real all out push has to be made, even if it does cost a few bob in the
beginning. At least we would save on Policing if these horror stories are
locked up.

Sounds like common sense to me. Unacceptable, therefore, to the
leftward-leaning persuasion. One story I heard concerned a gentlewoman
supporter of Lord Longford, who was visiting a Young Offender’s Institution.
One inmate was a young thug with a record for stealing and torching literally
millions of pounds’ worth of other people’s cars. As he was locked in his cell
for the night, this sensitive lady asked the prison officer if he thought that
locking the young man up was reforming him or doing him any good. “I don’t
know, and I don’t care,” was the officer’s reply. “But I do know that while I
can slam this door on him, he’s not stealing my car – or yours.” Which, as you
point out TJW, is the whole point of prison in respect of recidivists –
protection of the public, a primary duty of government in any country, but one
increasingly neglected in the UK. And with the promised severe reduction in
police numbers, this neglect or refusal to protect the public will certainly
lead to the public being forced to protect themselves.

A case for “Three strikes & you’re out” (of circulation for a long
time)?