A megawave of tsunami proportions is slowly backing up and preparing to wash over the judicial system. Today there are a scant couple of regional journalists standing on what used to be the shore line, scanning the horizon and wondering what it all means.

Sarfraz Ibrahim is the name on the apparently insignificant eruption in downtown South Wales that was the catalyst for the wave. It may mean nothing now, but it will in time. 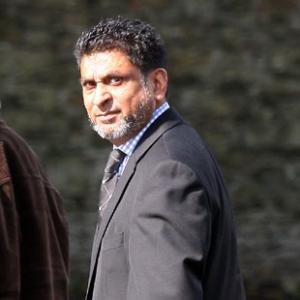 It used to be that a common sense figure of invariably statuesque proportions known as the ‘custody officer’ in your local police station was in charge of ensuring that it was right and proper that you take up time in your local court and receive justice for your misdemeanours.

Then the government in its wisdom, decided that they would employ lawyers in offices far removed from the scene of the crime to decide whether it was in the ‘public interest’ for miscreants to be prosecuted. The perception has often been that ‘public interest’ meant ‘have we a better than 50% chance of winning this one’ or ‘is it worth wasting public funds on prosecuting that one’. Some of their decisions, notably when they have decided ‘not to prosecute’, have been inexplicable to the man in the street.

No longer, thanks to Mr Ibrahim.

In the long hot summer of 2008, two undercover policemen from the serious crimes squad were tailing a man they suspected of being a senior Cocaine baron, when he pulled into a service station on the M4 in Swansea and met two men they couldn’t identify.

Some indication of the level of drug trade infiltration they may have been involved in, though I have no confirmation that this is accurate, is the news released overnight of a cocaine related ‘success’ which commenced during those hot nights in the Swansea summer. Ten men are due to be sentenced at Cardiff for their part in cocaine dealing which stretched from Australia, via Panama, through Kent to Swansea. SOCA officers trailed many of the Swansea drug barons for weeks. If this is not the same case in which Mr Ibrahim featured then I’m a Dutchman.

Anyway, back to our Swansea service station. Our undercover officers could not identify the two men that their trailed drug baron met, so enlisted the help of local officers. The answer stunned them.

One of the two men was Sarfraz Ibrahim, who just happened to be the head of the serious trials unit in Gwent Crown Prosecution Service. The other was a close friend of his, a property developer, one Saifur Khan, ‘also of this parish’.

Our undercover officers were unable to hear the conversation, nor did they see any evidence of money changing hands, so for the purpose of this article we must assume that Mr Ibrahim was completely unaware that the man he was meeting was a major drug baron, and that the three of them had chosen the salubrious surroundings of the back of the maintenance depot at Swansea Services to discuss the weather and the latest cricket score, as he is fully entitled to in our free society.

The SOCA undercover officers were of a less charitable nature. Realising that they had been risking their lives and their health for some months in order to trail some dangerous members of an organised crime syndicate to produce evidence with which to persuade – huh! Mr Ibrahim, who gave every indication that he was at the least a good ‘social acquaintance’ of their target, they set up a sting operation.

They inserted another undercover officer, known only as ‘Nic Baker’ into the less than salubrious surroundings of one of the rickety bed-sits rented out by Ibrahim’s colleague, Khan. After a few weeks, this undercover officer ‘committed a crime’ –for which he was duly arrested by the local police, charged and witness statements sent to the Crown Prosecution Service for perusal by Mr Ibrahim.

Meanwhile, back at the bed-sit, Mr Baker told his landlord, Mr Khan that he was desperate not to be prosecuted, he would lose his job. No problem, said Mr Khan, my friend Mr Ibrahim will sort you out. That’ll be £20,000 to you.

Baker handed over the £20,000. Ibrahim duly scrawled ‘no case to answer’ over the papers on his desk and that should have been that.

It would have been, had Baker been a criminal. Since he was a SOCA officer, every step of this incident had been filmed.

On Monday, Ibrahim, 51, of Cardiff, admitted corruption, attempting to pervert the course of justice and misconduct in public office, between May and August last year. There was a reporting restriction until last night. The charges only relate to the police ‘sting’ operation. You can see where this is going.

Every case where Ibrahim has recommended ‘no case to answer’ will be under review. Police Officers who sweated for months to bring evidence to him only to be told that it wasn’t ‘in the public interest’ to prosecute will be demoralised and despondent, not sure whether their work was faulty or whether this was not the first time Ibrahim had taken a bribe to drop charges. Defendants in past cases will be demanding a retrial claiming that they only made statements admitting some charges after making payments to Ibrahim – or other CPS head of trials units.

It was an inevitable ending for a system whereby anonymous legal bods in high rise offices far removed from the crime ridden streets effectively judged whether our courts should even be allowed to hear a case.

Ibrahim was caught by chance, how many other Ibrahim’s lurk in the CPS offices?

There are unsubstantiated rumours that Ibrahim was ‘one million in debt’. How does a humble lawyer come to be one million in debt, if true? It is an inevitable result of a society where it is not just food and water that are considered essential, but a £2,000 handbag for the wife, an expensive home in the right street, membership of an exclusive golf club or spa…..if you can’t afford it you put it on your credit card or steal the money to pay for it – or accept bribes.  The television repeatedly extols the virtue of the government scheme for you to go bankrupt and only repay ‘what you can afford’, but only ‘if you owe more than £15,000’.

Still, no need for him to worry about bending over in the showers, I reckon he has more to fear from the cups of tea smiling policemen will be pressing on him as he waits to hear his sentence. I wouldn’t drink them if I was him.

There is another danger – a significant one – that Defendants will claim
that he only prosecuted them because they did not pay a bribe and that the
cases against them were not in the public interest and/or otherwise interfered
with.

Matey got caught… were he a member of the correct club (unlikely for ethnic
reasons…) one does have to wonder if this would ever have been pursued in this
way.

I don’t believe it can be denied that there have been some breathtakingly
perverse judgements handed down (in favour of the defendant) even after cases
have reached a higher court.

I don’t believe in a racial or ethnic predisposition to corruption but the
operation of PC tokenism and sacred cowedness in relation to folk of different
origins cannot help matters.

The problem is deeper, far deeper – and that is why there is no appetite
for pulling on the thread that might unravel something on a grander scale.
Look back to Operation Countryman at The Met.

The people involved in our legal system are human and inevitably amongst
the honest folk, there are the corrupt, the venal and the mindcrushingly
stupid. We are led to believe it’s a meritocracy where non-performers are
culled. The evidence points to it being something entirely different.

As a practicing lawyer – albeit non criminal I could add some very
pertinent comments to this. But I can’t . I think I might get in very hot
water!
Least said, soonest mended! Or a society cowed?
Gildas the
Monk

There appears to be a link between the all-pervasive Common Purpose and –
how can I put it? – active malefactors. Methinks this is no exception. But for
every one which gets uncovered, how many….

This story (for which thanks to you) merits enormous publicity and a
television investigation asking how this corrupt sod got to such a position.
Why are these bloody lawyers not subject to an “audit”. Brilliant police work.
Just looking at that fat bastard makes my blood boil.

…and so another perfectly good system is sacrificed on NuLieBore’s altar of
centralised, socialist control. As with so many things mauled by their dirty
paws it was “improved” to the point of uselessness.

Unfortunately for all of us, despite all the talk, I dont see much
indication of DemTories “localism” agenda sweeping away this remote,
impersonal, inefficient drivel and pushing power back down to where it
belongs.

No proof, but on the balance of probabilities

What JuliaM said. The CPS is hideously PC, to the extent that the skills
and character of an applicant seem irrelevant compared to their ability to fit
tick-box criteria. Evidence:

Can I read the Core Quality Standards in other languages?


Aside from Welsh, for which there is an arguable cultural reason, none of
the others should even be in existence. Not one penny piece should have been
spent on them; it should all have gone on the process of prosecution.

“Not one penny piece should have been spent on them; it should all have
gone on the process of prosecution.”

Strange how the BBC tucked this story away so as not scare the horses.

A very thorough piece. I cannot fathom why story is taking such a low
profile. Bent coppers get splashed across pages and telescreens yet Mr Ibrahim
is of an even higher status as far as law and order goes.

Perhaps people of Ibrahim’s character are partly why the Police seem to
concentrate their resources on easy clear-ups – to reduce the wiggle room of
the CPS.

“There are unsubstantiated rumours that Ibrahim was

I am forced to wonder, noting the same peculiarity of this case as Fred, if
this chap owed his position – indeed, his very job – to the wretched
‘diversity’ quotas forced on every public sector department..?

This Ibrahim bloke looks foreign to me.

Probably comes from some place where corruption like this is normal.

I’d love to reply to your post, but I daren’t because I don’t want to get
done for Rascism.

He’s most likely British born considering his age and that he married in
1978 in Newport. So he’s been in Britain a long time.

His cultural background is a different thing. Here he could have been
brought up to believe family and tribal connections mean more than the
letter of the law.

However the cultural background probably has nothing to do with his
crime. People of all races, creeds, and persuasions can and do commit such
types of crimes.

This story was mentioned in passing in the BBC headlines on the day of the
verdict, and has since been buried under a mountain of football and tennis.
Bread and circuses for the masses, while the polis succumbs to decay,
debauchery and corruption.

Meanwhile the public face of the debate is over reduced police numbers on
the beat. But what’s the point of that? Every one of us could be a police
officer and crime would still flourish if the cancer of Ibrahim and his ilk is
not excised.