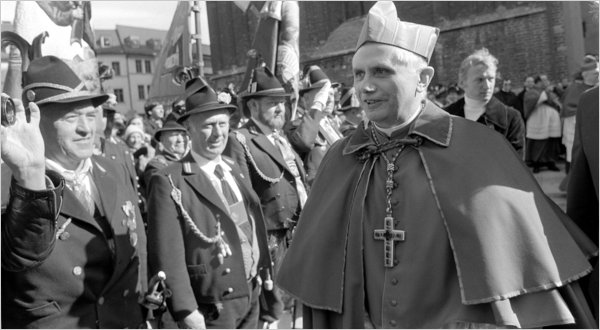 The unprecedented raid last week on the home of a former Belgian archbishop Godfreed Danneels, and the headquarters of his church reawakened the questions that have hovered over the heads of the Catholic hierarchy for decades.

Just who knew what about the repeated allegations of paedophilia that were slowly merging from the darkened corners of former orphanages and other Catholic establishments charged with the care of young people.

On June 11th Pope Benedict ‘begged forgiveness from God and from the persons involved’ and promised to do ‘everything possible’ to prevent future abuse.

The inference we were invited to draw was that Pope Benedict was now in charge of the matter and there would be changes.

Today we learn that as Cardinal Ratzinger he was, and had been for two decades, in charge of the office of the Congregation for the Doctrine of the Faith, an office which held full authority over sexual abuse cases and had done since 1922. It had simply never acted.

Pope John Paul famously believed that all allegations of paedophilia were manifestations of the Devil’s work – attacking the Catholic Church. He was Cardinal Ratzinger’s direct superior. The suspicion must be that despite the plentiful reports from Bishops around the world, Cardinal Ratzinger had more than one eye on his career, rather than using the power he possessed to instigate investigations into events that his superior thought to be Devilish lies.

“But the future pope, it is now clear, was also part of a culture of nonresponsibility, denial, legalistic foot-dragging and outright obstruction. More than any top Vatican official other than John Paul, it was Cardinal Ratzinger who might have taken decisive action in the 1990s to prevent the scandal from metastasizing in country after country, growing to such proportions that it now threatens to consume his own papacy.”

Whilst individual Bishops could either sideline or suspend abusive priests, in order to prosecute them, they needed the help of Ratzinger’s office – and it was never forthcoming. Silence.

Rather than attend to the problems of abusive priests, Ratzinger’s office was dealing with the thorny problem of the apparition of the virgin Mary, and penalising priests in Brazil or Peru for preaching that the church should work to empower the poor and oppressed……

In the 1990s, a Canadian priest bravely spoke out about the problem in front of Ratzinger – he was rewarded with a lecture on the number of priests leaving to get married.

That concern — that the irrevocable commitment to the priesthood was being undermined by the exodus of priests leaving to marry or because they were simply disenchanted — had already led Cardinal Ratzinger to block the dismissal of at least one priest convicted of molestation, documents show.

The truth has come to light as a result of a cannon law student who is now an archbishop.

Archbishop Wilson said in an interview that during the session he had to call Vatican officials’ attention to long-ignored papal instructions, dating from 1922, and reissued in 1962, that gave Cardinal Ratzinger’s Congregation for the Doctrine of the Faith, previously known as the Holy Office, sole responsibility for deciding cases of priests accused of particularly heinous offenses: solicitation of sex during confession, homosexuality, paedophilia and bestiality.

The Catholic Church has a lot in common with the Labour Party – the tribal necessity of protecting the institution is seen as more important than the good of the congregation. They are both being dragged screaming into the 21st century and we are not enjoying what we are seeing.

Allen again:
“From the beginning, the “sex abuse crisis” has actually
been an interlocking set of two problems: the abuse committed by some priests,
and the administrative failures of some bishops who should have known better
to deal with the problem.”

A more comprehensive piece by Allen, with no irritating
log-in requirements.

If there’s a story involving anything Catholic in the mainstream press, you
can safely assume it’s either utter tripe or so mangled that it might as well
be tripe.

Why not do something that’s been neglected in the press: the abominable
sex education materials produced by two professors from institutions
supervised by the child molesting bishop Vangheluwe?

Theodosius has beaten me to it. I was trying to recall the details of all
this which I looked up during some previous bout of blatant misrepresentation
(and in one case lying) by one paper or another in the abuse horror.

I am rather disappointed in you: I was much taken with the way in which you
picked apart other supposed stories in the news, and here you’ve merely
expressed outrage over something which a little googling would have told you
wasn’t accurate. “Prosecuting”? (do enlighten me, I can’t think what is meant
by this term in this context).

Have you read John Allen’s March piece for the New York Times? Allen is not
by any stretch of the imagination a Benedict apologist. Here’s some of it, for
those who aren’t registered on the NYT website:

For anyone who knows the Vatican

You are the victim of a deliberate programme of misinformation. Until 2001
the CDF (the body which Ratzinger led until his election as Pope) only had
responsibility for the crime of soliciting sexual relations in confession.
This changed in 2001 when it was given a broader overview. Local bishops have
always had full authority to suspend abusive clergy. The only thing they need
Rome for is to reduce priests to the lay state. This removes the ex-priest
from the supervision of the bishop so it is not always sensible. It can often
be safer to suspend rather than laicize abusive priests. Many bishops have
failed in the exercise of these powers and Rome has taken more powers to deal
with such problems directly. This frightens bishops hostile to the Holy See
who do not wish to see Benedict XVI clean house. Relying upon general
ignorance of canon law, frightened bishops (assisted by others who reject the
teaching of Benedict XVI) have been feeding misinformation to the secular
press in the hope that they will weaken the ability of the Pope to bring them
into line. The Belgian bishops at the centre of the recent scandals are prime
examples of the type. It is terribly important to have a more sophisticated
understanding of the realities involved here. If one were punched by a
policeman one would not normally say

Anna, I agree with the thrust of your post
I was brought up Catholic. I
still have a problem regarding anything but a Catholic priest as having any
really serious authority – especially when it comes to exorcising the demonic
presence in the cellar (joke- usually the only demonic presence in the wine
cellar is me! ).
More seriously, the institution has a rotten heart.
Perhaps a poor sinner such as me should be appointed to investigate. An
Inquisition, so to speak. I’d do it. I’d be quite good at it, I
think!
Well, there is one other thing. Assuming that we do have to answer
for our sins in Another Place, then the present Pontiff may face some
interesting questions.
Perhaps it will be quite hot, too.

I thought Belgium was world paedophile headquarters anyway, just look at
their history, or a picture of rumpy von pumpy!

We should have let the Germans flatten the shithole last time around.

Any other particular reason to calumniate a country and a politician?

One of the many distasteful aspects of this is that the Church protested at
the manner of the police raids in Belgium. The attitude seems to be “We, the
Church, will sort this out, in the best way possible, and we should be trusted
to do so”. The truth that the Church will not recognize is that it is a
private club, just like any other, and that if crimes need to be investigated,
they should be investigated by the secular authorities. For the Church to
accept that it is merely one organization among many, fully subject to the
secular authorities, would of course require a massive mental shift. But it is
one that is being forced upon them by this scandal.

Richard Baron.
Very similar to the system of MPs complaining that the
judicial system has no right to try them over the expenses system, it should
be left to the parliamentary authorities.
And then you have the Muslims
demanding Sharia law……

And Jewish courts too. Plus mediation services. British law recognises
private ‘court equivalents’ up to a point doesn’t it?

The problems with that come from two angles.

1. A general one: Do both participants adhere to the ‘court’ their
issue is being settled in? When it comes to religious courts in particular
I can’t see how that can be guaranteed.

2. A matter more specific to this type of thing: If the ‘prosecution’
is an internal disciplinary matter rather than an external Police
investigation it is in effect displacing the children from the position of
victim and replacing them with the Church. The Church has been wronged in
that the culprit has gone against Church rules. It is being dealt with as
if it is a Hooman Resources matter. How anyone within the Church can
satisfy themselves that things are being dealt with properly I cannot
imagine.

Even though the church has procedures for dealing with transgressors it
should never become (or have become) a matter of one or the other. It is
no substitute for prosecutions in the interests of protecting the public
and finding some sliver of justice for the victims.

HR would deal with rule breakers by disciplining them. The point at
which the rules being broken are the ones in the wider world is the point
where HR people surely have a duty to inform the Police. Don’t do your job
properly and you’ll lose your job. Don’t do your job properly and punch a
customer and you’ll lose your job *and* get yourself arrested.

As is always the case, no matter how bad the crime (and child rape is about
as bad as it gets) it’s actually the cover-up that will bring down the whole
organisation. We can but hope.

Some of us feel only a sense of complete vindication combined with weary
resignation that Ratzinger will brazen it out to die still in office having
overseen the beatification of JPII. Britain is hosting this rancid apologist
for criminals soon. One would hope, in light of this, that the invitation
might be withdrawn. I won’t hold my breath.

“They are both being dragged screaming into the 21st century and we are not
enjoying what we are seeing.”

But some of us ‘outsiders’ are, sick of the hypocrisy preached by those in
power.

You are a true libertarian and very perceptive , Joe – I can tell by your
posts.

The hypocrisy preached by those in power – yes, that sums up so much.
Political, religious, economic. The self nominated. The place-men with no
talent. The Quango-istas on

“The truth has come to light as a result of a cannon law student ……..”

It’s as though the scandal is about to explode!