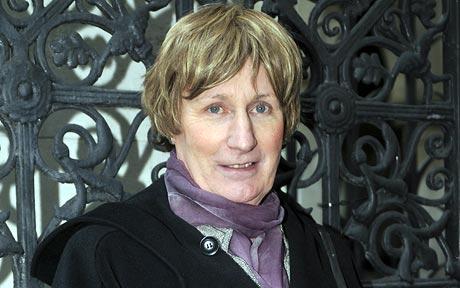 With the announcement today that State Retirement age is to be raised to 66, this ‘snip it’ (sic) may be of interest to the gentlemen amongst our readers.

Christopher Timbrell was 58 years old, and had been married to his wife Joy for 34 years when he took the momentous decision to undergo a sex change operation and re-emerge as Christine Timbrell – still married to Joy. Good luck to him, his body, his choice.

Now the law has been remarkably understanding of the plight of transsexuals (belatedly) over the past few years. The Gender Recognition Act of 2004 now allows those who have undergone corrective surgery to be legally recognised in their new gender. With one proviso – that if they are married to someone who presumably was of the opposite sex when they got married, then that marriage be dissolved before they gain full legal recognition of their new status – for the simple reason that marriage in the UK is only permissible between two people of the opposite sex. Follow the law and you can legally become ‘her’, as it is I am forced to describe Mr Timbrell as him/her.

Christopher and Joy are regular churchgoers who were married by a Bishop over 30 years ago, they take their religion seriously.

So far, so good. Christopher, now Christine has been able to do with his body as he wishes, and no-one is forcing him to divorce his wife.

However, you may have noticed that when he decided to undergo surgery, Christopher was only two years below the age at which he would have been able to draw his pension had he been a woman. Snip, snip, and there he was – a woman in all but birth certificate.

Pension please, said Christopher. No! said the Department of Works and Pension – in order to get an early pension you need to be legally a woman and that means divorcing your wife – but you can then conduct a ‘civil partnership’ with her if you want to. You can’t be legally married to a woman and legally be a woman at the same time. One or the other please.

Christopher/Christine took them to court, citing the Human Rights Act saying that forcing him/her to divorce his/her wife was a violation of his/her right to respect for her home and family life.

Yesterday, our liberal Judiciary in the Appeal court ruled that he was quite right, the Department of Works and Pensions were discriminating against him/her and should pay the pension from age 60, and not force him/her to divorce his/her wife.

Now you know the solution to having to work until you are 66 – a snip in time saves six years; and you don’t have to divorce your wife.

She may, of course, wish to divorce you.

Wait, wait, don’t cut it off yet – this only applies if you were born before July 1948.

Sorry, was I too late to stop you?

Nothing would induce me to those extremes to get a couple of thousand off
the State in benefits !

Funny how this devoutly religious pair won’t divorce because of their
beliefs but accept Christopher/Christine’s sex-change. Isn’t there something
in the Bible that forbids having your nadgers cut off and wearing laydees’
clothing? There is for just about anything else. Claiming the extra pension
entitlement* simply adds the fun to the mentally hypocrisy of this whole
business.

*entitlement – is that a breast augmentation operation available to
transexuals?

Can’t answer for the Bible, but medieval Christian priests had to have a
complete set of equipment to be ordained. In an era of sharp-edged weapons,
it was not unheard of for a man to become separated from what he held most
dear.
Luckily for those who had suffered major injury in the trouser
department, there was a handy get-out clause – they could still join the
clergy if they could demonstrate that they were in possession of their
tackle, albeit in a jar.

Perhaps Christine threatened to avail herself of this grisly tradition at
the court of appeal.

Given the blackmarket trade in relics eg bones and bits of the cross, I
suspect there was a similar business that furnished pickled nadgers to
emasculated ordinands. Wasn’t the Pope’s throne constructed to enable a
young deacon to check the underbody for completeness? The story of Pope Joan springs to mind.

Has the makings of a great school motto, doesn’t it?

“Gender Recognition Act” Is that an oxymoron?

Surely it’s because some folk don’t recognise their gender from the
original physical evidence, that corrective surgery has to be applied.

I view marriage (as a legal entity) as a way to protect children. After all
wasn’t that why it started in the first place? But of course nowadays any
woman can procreate and there’s little difference between the responsible male
supporting them in many cases or the state.

In my experience men who have a sex change such as Christine/Christopher
are very strong personalities as was shown by the cases taken to the European
Council. Good for them. Thankfully there’s a place for them in society these
days.

Hopefulyl this case will at least lead to someone considering revising the
legal concept of marriage so that it is between people who love each other and
wish to formalise their relationship irrespective of gender(s) – and IMHO
numbers – involved.

The idea would however cause the religious and the Daily Fail to freak
out.

My wife of 42 years is also guaranteed to freak out – were I rash enough
to tell her I wanted to add to the numbers permitted me!

That and the Life of Brian. Loretta fought hard for the right to have
babies.

The State should have nothing to do with marriage, civil partnerships, who
or how many you shack up with, or who or what you shagged last night.

Whether they are still married is between them and their church. It has
nothing to do with anyone else.

Secondly the retirement age for women should be the same as men. Blatant
sex discrimination.

Mike, I was under the impression that the state retirement age for wome
was now the same as for men? That was why I said it only applied to those
born before July 1948.
I do agree with you though, it is ridiculous
having the state legalise your sex life, which is what this amounts to. I
have a friend who is quite a prominent journalist who is in just this
situation and he and his wife are still together, I daresay he will have
something to say about it shortly and I shall link to it when he does.
As
Subrosa says, it takes great courage and commitment, and a strong
relationship to survive this situation and the state shouldn’t be forcing
apart any strong relationship.
I am just enjoying the pickle the State
have got themselves into trying to hedge all bets and keep everyone
happy.

I’m no expert on the GRA but from what I understand from others, it
wasn’t a great piece of legislation and there is some pressure to get it
amended. Still, Christine Burns and co all got their gongs afterwards
which is, I’m sure, all that mattered.

If that’s who I think it is then I look forward to reading that
piece.

The most momentous aspect of this heartening story is the relationship at
itc centre. For Mrs and Mrs Timbrell, as I suppose we ought to call them – the
English language is depressingly inadequate these days – to have stuck
together through a sex-change and the stress of a court case suggests
an enviable degree of matrimonial harmony.

Yes, it does doesn’t it? Best of luck to them both – may their happiness
long continue.

Now that Timbrell no longer has a cock – I wonder if the state would also
compensate him for loss of earnings if he had been working as a male escort
and needed his ‘old fella’ for work purposes?

I have no doubt he/she will be able to collect his/her second pension on
achieving 65 years so as not to upset her/his/its sensibility’s.