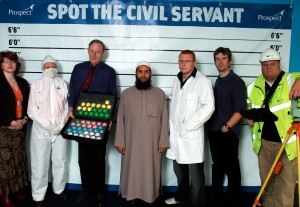 Tom Harris must have expected some shtick when he wrote these words, he disabled his comments temporarily.

I was merely interested in why an MP should suddenly start slagging off the civil service – what could have driven him to it? Ah Ha! Now we see!

Those Civil Servants are behaving like old fashioned bank managers and deciding how much and when MPs can dip into the National Handbag for their expenses. They are allegedly doing it in a haphazard and disorganised manner, replete with inefficiency, inexplicable bias, and plain incompetence.

Where have I heard a story like this before? Give me in minute, I shall remember.

Civil Servants are the last vestige of the class system; they live and die by it. They have a pecking order all of its own. Any job, no matter how menial, performed within the hallowed walls of the Foreign Office, is preferable to any job performed within the Treasury, and so on down the Ministerial line.

Hence you get the most competent civil servants in the most desirable jobs or Ministries. The House of Commons would be fairly high up the pecking order. Palatial surroundings, Prestige, Central London Address and an easy commute, subsidised bars and restaurants.

As you prove increasingly useless and accident prone, you get shifted downwards.

Almost at the bottom of the sewer used to be the old Ministry of Agriculture and Fisheries. MAFF, as they were known – or the Department of Dumb Animals.

If you couldn’t quite cope with the pace of modern life in MAFF, you were transferred down the line to another Department where you were expected to behave like an old fashioned bank manager and decide how much and when members of the public could dip into their own money for their expenses. The Public Trustees Office as was.

Strange how MPs never complained about the incompetence, incivility, and downright inefficiency of the Public Trustee Civil Servants that members of the public were forced to plead with for their own money, but given an altogether superior form of Civil Servant based in the House of Commons they suddenly come over all transparent and voluble on the subject of incapable civil servants.

Shame on you Tom Harris, it just goes to prove that you lot are only interested in yourselves; some of the most vulnerable people in society have been grappling with a far worse problem for years, and you never said a peep.

On the subject of MPs expenses, whilst researching the Vera Baird story, I have come up with an interesting snippet.

Whilst those of us who have studied the Green Book were well aware that when we kicked out some of the most incompetent and dishonest MPs in the last election, they still had their little trotters in the trough – they get a resettlement grant, graded for age and experience, to help them make the transition back to the real world and get on with performing honest labour – but there is another substantial sum waiting in the wings for them that is not noted in the Green Book at all.

Vera Baird claimed she still has some 800 files on constituents that she ‘can no longer help’ – and that these must be returned. She is of course now banned from driving to their homes to deliver them. She said in court that there was no ‘point’ in claiming for the cost of a taxi to deliver her and the files to myriad addresses.

I shall be putting in a FOI request on the 7th September 2010, to find out if she discovered that there was a point after all.

Up until the 7th September, Ms Baird and her fellow rejected MPs can claim up to £42,732 in addition to the resettlement grant for the cost of travel, taxis, and office staff….

It has taken me three days to get this answer out of the House of Commons, they are unable to say why this figure is not delineated in the Green Book ‘but imagine’ it will be known to ex-MPs. They ‘imagine’ that it will be subject to the rules on receipts set out in Part 1 of the Green Book for serving MPs.

“It has taken me three days to get this answer out of the House of Commons,
they are unable to say why this figure is not delineated in the Green Book

Good Heavens. We are all going to hell in a handcart and now we discover
that Ex MPs can double the Leaving Grant.

How has Britain managed to survive for so long. I am beginning to suspect
that Britain might be better off without any Parliament at all.

We will never get rid of the Public Sector, they are not putting up any
resistance because they know that.

They are well dug in.

I suspect MI6 has an easier job of getting nuclear secrets out of China,
than the taxpaying British Public does of getting ALL expenses info out of
Parliament.

Heavens above! MP in a lather because civil servant (allegedly) makes a
mistake about whether an MP can claim a travel allowance for a child over 6?
Is that it? After the duck houses and moats, the sofas, the flat screen tv’s ,
the wisteria, the porn and the endless flipping, the fake “second homes”
…..!
Yes, that’s right Tom. That ‘s the kind of petty and minor
inconvenience which us mere mortals have to deal with in the real world,
whether dealing with the local council or “Derek from Accounts”. It’s how life
is. How interesting that you should be provoked to such ire. How revealing.
How very beneath you it must feel.
Remember, dear Tom, that this system has
had to be imposed because of the naked, crass corruption of so many of your
comrades. Doubtless you would prefer no controls at all. Of course you
would…
As to the wider issue of re-settlement grants, I have just been
forced to move jobs. Because of free market pressure. Because I was facing
ruin. Can I have a resettlement grant now please? And some money for taxis and
staff?
No?
Didn’t think so.
Great research, Anna
Gildas the
Monk