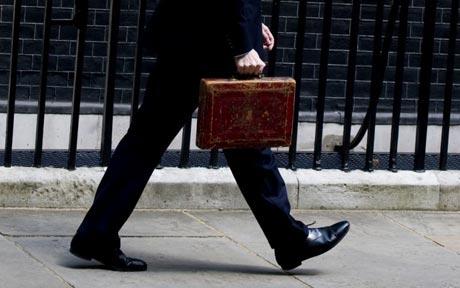 I have been otherwise engaged battling the forces of darkness in Court, the subject of a more considered post mid July.

So I have only just got round to George’s efforts at sorting the insolvent Government we have. Can I underline this, the Country is not insolvent the Government is. We, the Country, have Billions and Billions of assets and cash. Out of a population of twenty million working adults how many are responsible for this unholy mess ?

Most families have to match income with expenditure with a bit of judicious borrowing; when it comes to other people’s money there is no restraint, no sanction, no accountability.

Right! Lets treat HMG as an insolvent business in desperate need of rapid turn around.

The last thing you do is put your prices up (VAT) to your customers (you and me) and keep the wallowing wage bill in place, and at the same time reduce your service levels.

I agree with minimal taxation on consumption in place of  direct taxation on salary, but this sends out all the wrong signals and will not endear the public to see this through. It is a collective punishment for something that most of us did not commit. Unrestrained spending. Do not drag the public into the appalling behaviour of  Government, the problem is not us it is you the political elite !

Secondly you do not punish savers and investors with increases in CGT, you reward them for saving and investment.

Before dragging us into their insolvent mess a few pointers on how to achieve a turn round.

Start selling unused assets. The State has billions tied up in land and buildings it is not using. Get rid of them at heavily discounted prices to raise cash now to pay off debt. Grant planning permission on these pieces of land irrespective of the maw of the suffocating planning laws. This will encourage building houses and get construction workers earning a living instead of being on the dole.

Get rid of the Banks the State acquired, declare them insolvent, and break them up into myriad regional banks that lend instead of rob their clients. Sell them to the highest bidder. All Banks to be licenced  and supervised by the Bank Of England. Any former Director of these banks to be refused work in the industry for the next fifteen years.

Start closing down unnecessary Departments of State and Quangos. Start with Business, Innovation and Skills, the public sector has very little knowledge of either three. Close every Quango irrespective of function. Prince Andrew will have to get another job to fund his international golfing fix – International Trade Consultant be damned!

All other departments to be made redundant and made to reapply for their jobs. Brown gave us an extra 1 million public servants, they need to go and Government savagely reduced. George Osborne is aiming for 25% reduction, it is not going to happen, even under Thatcher’s  Government spending kept increasing.

Stop all wasteful and unproductive activity – Start with Afghanistan we marched in  march out. Stop all foreign adventures on behalf of the USA – The special relationship is bunkum. The BP saga has proved this.

There is nothing other than Defence and Foreign Affairs that cannot be done better and cheaper locally and privately.

George when you get serious about the National Debt, by making former Government Ministers accountable personally, like District Councillors, I will then start to believe your rhetoric, but so far I am not convinced you are going to reduce the State. If you cannot do this, your figures don’t add up George.

Over the last few days the attack on peoples pension seems to be high of
the governments plans.
But why is no one looking MPs & Lords pension
entitlements.
Lets just take Maldleson.
He was twice sacked as a
Minister that’s 2 pensions he picks up.
When he stopped been an MP that’s
another pension he collects.
He then went to be a EU commissioner when he
left that job he collected another pension.
Brown brings him back as a
minister when the government lost he picks up another pension.
Being a Lord
also entitles him to another pension.
I reckon he’s pulling in over

Last weekend Vapid Cameron broke his first promise which was his promise of
a referendum before we handed obver more power to the EU.

He sat there lumpen and moronic and did what he was told by our true
government the corrupt, unelected bureaucrats of Brussels – Instead of say do
what you like with the EUro, none of our business he surrendered to agreeing
to support the EU in its efforts to support this busted currency!

Next we have little clever clogs who has NEVER had a proper job who got his
Bulingdon Degree & History Club at Oxford and rapidly went into Tory HQ
even byepassing the family wall paper business!

His stunning idea was to break two of Vapid Cameron’s promises – He is
putting up vat!!! NO this is the EU taking more power – the EU instructed all
member states to have in place plans, by the end of June, to harmonise vat at
20% or more!
http://www.eureporter.co.uk/story/vat-harmonisation-will-bail-out-governments

well yes govt. should be simple. defend the realm (that means not attacking
johnny foriegner) keep law and order etc……..
government should not be
giving money to all and sundry……

the eu……….(didn’t we struggle against communism for years in the cold
war)?

the govt. should not be reliant on the tax receipts of the high st. banks
(or is it calle now) to keep alive a socialist nightmare designed to buy
votes?
(the big 4 generated

Make stuff complicated you can get a well paid ‘Government’ job to
administer it, then multiply by a million thanks to Brown and you have a
deficit of imaginable proportions- then make these jobs ‘frontline’ services
then you have a bureaucratic non functioning state like the DDR

The Ponzi scheme that is the welfare state is dying on its feet before your
eyes, yet ninety nine point nine per cent of the population are so conditioned
that they will not believe it until it crashes.

Do not rely on the State if you are young for your health, your future
,your retirement because DDR Britain just might not be here in thirty
years

As to Classical Liberals not having power, I think the worm is already
turning, the Social Democratic benign State never worked and has impoverished
us all. This period is a crisis of Fabian Socialism

Forgot to say — I DO agree with you on getting the hell out of Afghanistan,
and telling the Americans where to get off. Difficult to do, given their
economic power plus their ego-mania, but one day it will have to be done.

I can’t help feeling, Andrew, that if your party were ever to get into
government… not that that’s going to happen, but anyway… you might find that
our national affairs were just a teensy tiny bit more complicated than your
simplistic view.

It may well be that national affairs are complex because the state
chooses to make them so, lenko.

and that folks is why the Libertarian Party will never be anything but an
interesting protest movement…..

Claims that I benefited from the state’s profligacy are not true and
irrelevant anyway. The government, the state should take the pain for this
fiasco.

The rail network and roads are, perhaps, national structures too, so should
not be left to local control. E.g., “You are now about to enter Norfolk, where
the roads are suitable only for 4WDs” does not appear sensible!