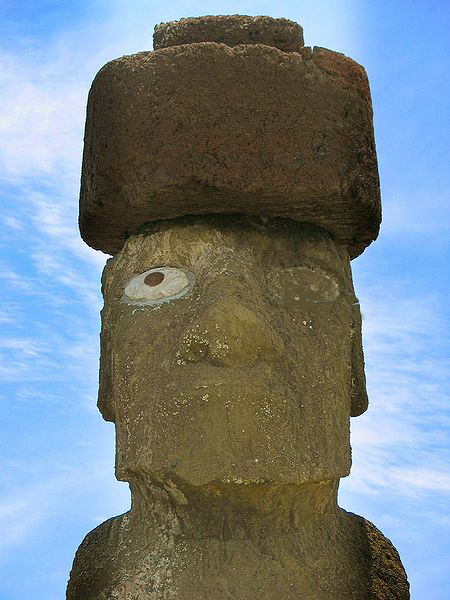 THE GREAT STONE MAN OF FIFE

Last week, A History of the World in 100 Objects examined the Death Pottery of Batsu–Batsu and its images of human ritual sacrifice, cannibalism, and voodoo. This week we move into altogether darker and more terrifying territory, as we consider the Great Stone Man of Fife  – an artefact which perhaps only now scholars are being beginning to understand.

The origins of this extraordinary and sinister megalith are unclear, but it has always been understood to have been fashioned by a people ruled by a savage and fanatical tribe which worshipped bogus statistics, hated free will and choice, and attempted to impose its will by endless dictat and forms. A bombastic and aggressive tribe, keen to extend their will over all the free peoples of Britain. These frightening people are known to the modern historian as the Nova Laborii .

Little is known of the Nova Laborii, but some tantalising fragments of information remain. For example, in 63AD the Roman general and governor of Britain Gaius Suetonius Paulinus wrote this in this in one of his private dispatches to Rome:

“Dear Gods, we thought the Druids were bad, but word has reached us that the land had once been ruled by the Nova Laborii, and their great King Gordonius. These people were greedy of high office and big pensions, and established dominion over the rest of the poor Britons by lies and the power of their Shamans, whom they called Spin Doctors. They spoke ill of the ordinary Britons, who they called “bigots” meaning, in their language “little people who we despise and who should do what we tell them.”

Under Gordonius the land was ravaged by debt and taxes and by many forms of management consultants, and all forms of freedom and joy were curtailed. So badly was the land demeaned and public finances mismanaged that the Britons could not even finish the roof on Stone Henge, and we didn’t have to fight much because they could not afford a proper army! Apparently, life was not much fun either. You had to carry out a Health and Safety risk assessment before you could play conkers or have a Marlborough Light. They imposed horrible strictures upon the people such as “five a day.” (author’s note – what this refers to is unclear. Perhaps some form of worship, but we cannot be sure). Utter clowns!  The Britons were just glad we weren’t as bad, but keep referring to us as “the IMF”, which is a bit odd. PS, it’s blooming cold and always raining, please send more undies”

Let us look, then, more closely at the Great Stone Man of Fife. It has been assumed to be an homage to the legendary Gordonius himself, resonant of power and authority, erected by the Nova Laborii (or more precisely, their slaves, the so called “ bigots”) in tribute to their mighty leader.

But is this right? The figure is clearly Gordonius, but today, historians advance a new theory as to its meaning. Consider the evidence.

First, there are the strange features of the head of the statue.  There is not one face, but two. Peculiarly, one face appears to be smiling, but it does appear to be making a very bad job of it, with teeth clenched in a peculiar rictus grin and wildly staring eyes. The other clearly wears an expression of sullen resentment and confusion, as if the person depicted has been deprived of something he believed was his by right, and cannot understand why. High office, for example.

The main body of the statue is also strange. It is, perhaps, one of the wonders of the ancient world, with its complex system of stone levers and trunions. Powered by the wind, this causes the body to rock endlessly backward and forward. It appears to depict the subject wearing some sort of white robe with straps and buckles, and the  arms are wrapped tight around the chest. For centuries, historians have assumed that this pose depicted a gesture of power and authority in the style of an early Mussolini, and wearing of some sort of war gear. But, it has been now been pointed out that this pose, together with the endless backwards and forwards motion, might be equally be consistent with, for example, a mental patient wrestling to get out of a straight jacket whilst in a deeply distressed and confused state. The Latin inscriptions “Ritalin” and “Valium” on the megalith may support this interpretation.

There are further strange inscriptions. On the megalith itself the words “Seventy Five Pence Pension Rise, You Bastard!” have been carved across the forehead of one of the faces, apparently by someone called Barry from Nuneaton, but whether this was part of the original design or is a later graffiti is not clear.  However, it is clear that other slogans etched on the plinth such as “Nought per cent growth” were part of the original design. Linguistic experts originally believed that these may have been gnomic expressions of ancient wisdom in some long lost language such as Sanskrit. But the modern consensus is that they are, in fact, just demented gibberish.

Next, there are the feet. Whilst the rest of the statute is carefully crafted from granite, the feet themselves are made of clay.

Beneath the feet, around the base itself is a fresco depicting hundreds of ordinary Britons being harangued by tax collectors and looking thoroughly hacked off. At the rear of the base the mural depicts a group of soldiers being sent into battle with no suitable swords or shields, while a figure, also believed to depict Gordonius, looks the other way, smiling and counting beans

Finally, let us look at the head again. The head itself has been carefully hollowed out. It is, indeed, entirely empty.

So, is the Great Stone Man of Fife a monument to a powerful tyrant? Or the expression of resentment by a free people to a demented two faced lunatic with an empty head, and feet of clay and a fixation with bureaucracy?

A cruel and malevolent King indeed. Woe to the King who neglects his own
people.
Gildas the Monk

I assume the traditional gathering at Glastonbury are the Nova Laborii
serfs of Gordonius about to be sacrificed as punishment for their support of
the Great Fool of Fife.

Recent research shows that the youth at the time of the Great Stone Man
of Fife suffered terribly.

Scientists discoverd that many youngsters over indulged and abused
themselves to such an extent that drunkenness, alcohol addiction, chlamydia
epidemics, dereliction of education and other aberrant behaviours nearly
destroyed the Fife Generation.

The Fife Elders had to resort to bribing untarnished workers from
neighbouring kingdoms to come to Fife in order to fill the quota of able
workers that were needed for the Great Man’s Projects.

Many parents protested but were repeatedly told by the Fife high priests
that they were middle class pushy parents who were denying the Great Man’s
godliness. Many such parents were summarily subjected to death by taxation
or unemployment.

Great stuff Anna and a perfect antidote for me after I was harangued by
Labourites for daring to suggest the free swimming passes for oldies and
children had been counter productive. If they want to encourage everyone to
swim and get fit why encourage into the pool the two demographics most likely
to piss in the water?

A Star is born, before our very eyes.

Well thank you kind brothers – my first full on post, so to speak, so I was
a bit nervous. Many thanks to Anna for editing and facilitating
Your humble
scribe
To vespers, and then then two pints of alter wine
Gildas the
Monk

“…..and then two pints of alter wine”

I thought you religious guys changed water into wine. To sup at the
altar.

Excellent Gildas. You deserve at least two chalices of the Abbot’s best
altar wine for that.

Hopefully Micahel Wood or Bethany Hughes (hrrrrr) will make a fascinating
documentary about this mysterious Great Stone Man of Fife.

I have recently pitched the idea of a documentary to the Beeb – In
search of Michael Wood. Did he really exist? What was the truth behind the
myth? As for Bethany Hughes, hrrrr indeed!
Gildas the Monk

Quite brilliant! I would have laughed my socks off – had I been wearing any
– thank your, Anna.

Gildas, that explains everything!