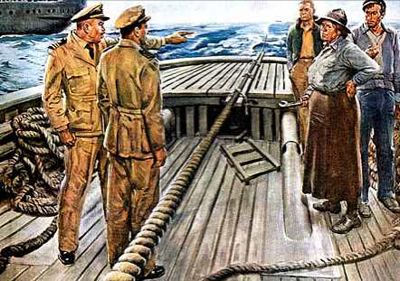 You have to admire the womanâs Dunkirk spirit. Totally unsuited for the voyage, bravely fighting her way to the front, canât actually do anything useful when she gets there, too small, too insignificant, too unbalanced, too, well, flat bottomed â but by gum, she does the heart good to see her trying on behalf of her bedraggled troops.

Her Captainâs gone AWOL, half the troops have mutinied, the allies have gone over to the enemy and even her own bullets explode on her.

She still goes to sea though, even when she knows Cameron will hole her beneath the water line if he so much as catches sight of her.

I admire the woman. One day there will be a National Harman Day, when voters will gather in Kirkcaldy to stare at the ancient ruins of the Labour Party and wonder at the pluck of the woman who alone strode into battle right to the end.

It really is time to nail one oft-repeated spelling mistake.

Mr Hattie Harmanâs name should be spelled with an N, not an M :

fanatics often hang on as the world collapses around them.
But they
often do the last deed with with a lethal gesture.. As they are so terribly
misunderstood.
Any chance of a good exit.

Her voice grates, her politics are bizarre and sexist. And apparently her
husband is a woman.

Hopefully the man -hating feminazi bitch will soon be consigned to the
dustbin of history along with all the other hippy scum who have sold our once
great nation down the river. She is so stupid itâs unbelievable!!! Or is she
just evil ???

I had to laugh when I saw H. Harman (Ms) yesterday accusing the new
Government of having more neck than a giraffe! This is the same Harperson who
has been wearing a unlikely brown/pink giraffe-print jacket for the best part
of a year and a half. While itâs nice to see a âcapsule wardrobeâ in heavy
use, I expect some media-savvy types advised her to wear something else for
this âneckâ jibe yesterday.

I have to object to this too, on behalf of 50s and 60s readers of the
Saturday Evening Post. Ruining our memories of Tugboat Annie. And what an
obscure reference for most of us Britishers.

Flat bottomed? Show us the evidence.

Harpie? The woman who is part responsible for the death of Labour â a
female chauvanist pig is what she is â no more no less. History should forget
her. She has about as much talent as my dead hamster and she betrayed the
working classes. Shame on her and all of the NuLab cronies who have
slaughtered this countryâs free and tolerant spirit!

I have to object to this on behalf of talented dead hamsters everywhere.
To be compared to Harriet Hormone (ne Jack Dromey) is the final straw! We
demand equal rights for dead hamsters!

There are some ungracious comments about her linked through the Speccie
blog but one does have to admire her complete disregard to stare facts in the
face. She may just have an incredibly sophisticated sense of humour, irony,
masochism â errâ¦

Watching her budget response yesterday took a load of effort though, her
performanace at PMQs seemed much better.