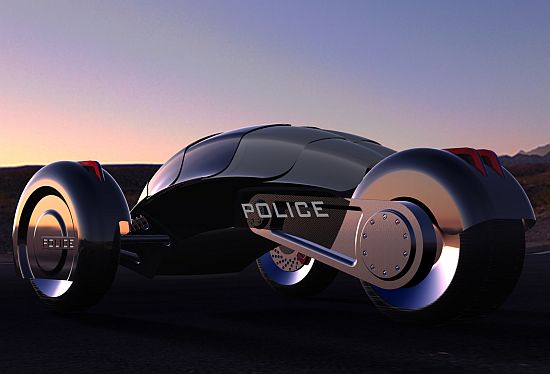 Coroner Michael Rose, speaking at an inquest in 2008, said that more than 200 people had been killed in the previous six years by high sped police chases. I cannot find more up to date figures than that.

Of those 200 people a mere one third were ‘civilians’. I am presuming that by ‘civilians’ he meant people who were neither police officers, nor alleged miscreants being chased.

The premature death of any person is to be regretted, although I have less sympathy for the miscreants, since they had chosen to flee the scene at high speed.

The Police Officers have no choice other than to do their job – and incidentally, it is because they are doing their job, that they are not entitled to sue in tort for damages incurred as a result. That doesn’t necessarily mean that they suffer financially, because the Police ‘carry’ their own internal insurance and compensation.

Innocent passers by are the real victims.

I am not quite sure who the intended beneficiary of the vehicle pictured above is. It is an unmanned police car, specifically designed for high speed car chases. ‘The Scarab’.

I can see the potential benefit for Police Officers; they will no longer be physically involved in the carnage that results from a high speed chase.

Seeing this scary looking object speeding along the road behind you may well persuade the miscreants to drive ever more erratically and dangerously, so not likely to result in less carnage amongst the miscreants.

As for innocent passersby – how will the Scarab know? Will it sidestep the Mother stepping out with her pram in front of her, the toddler that runs across the road?

Will the police still be legally responsible for the damage caused by a machine with no human operator, which is triggered by a ‘crime’ – the speeding car passing?

If this electric (so very ‘of the moment’ and green!) semi-autonomous police car ever makes it to the UK, I can see some fascinating legal battles ahead apart from anything else.

Then again – it could have kept going in persuit of Derrick Bird..…

It is a pity that the police don’t realise that they are subject to the
Laws of Motion too. Their ‘expert’ drivers are in reality only getting away
with crazy driving because other people get out of their way; the poor
‘civilan’ that is waiting to complete a turn in the middle of a junction
doesn’t stand a chance.

As always, ‘Necessity’ is the mother of strange bedfellows.

As I recall, a number of jurisdictions in the USA have shown that high
speed police chases achieve very little except disproportionate damage,
usually to innocent parties and their property. So this is a nice high-tech
‘toys for boys’ solution to a non problem. Aerial tracking is a far better
solution for the few cases where it is warranted.

I guess this is a complicated subject. First of all, I guess it must be
very complicated for police officers to actually get involved in their duties
without being worried about the possible repercussions of their actions.
Besides, there are also innocent people out there that can be victims of
mistakes or situations that cannot be avoided. It is complicated, indeed.

Ha, ha, so it can chase the criminals, but what happens when it catches up
with them ? does it throw out a net and drag the crim’s back to the police
station where a hologram processes them ?

Why invent an unmanned ground vehicle to chase vehicular criminals when
there are a wide variety of unmanned drones available already? Besides,
chasing the crims is pointless, as at the point they bale out of their hot car
the Scarab can only (hopefully!) stop just behind it and wait for ground based
units – just like the controller of a drone would do.

There doesn’t seem to be any explanation of how the officer ‘tags’ a car
with radar. I do hope they are not thinking of tracking beacons being fired at
vehicles. As for in vehicle radar nip round a corner, behind a lorry or
anywhere else basically out of sight for a short while and the radar won’t
follow you. The constable would have to keep re-tagging you whilst in pursuit
but at a safe distance. That would not be conducive to safe driving on the
part of the constable.

Seeing this scary looking object speeding along the road behind you may
well persuade the miscreants to drive ever more erratically and dangerously,
so not likely to result in less carnage amongst the miscreants.

Nor the people miscreants sometimes mow down.

As for innocent passersby

A particular breed of sub-human will never be stopped other than locking
them up for a very long time.
I knew one who stole a vehicle nearly every
single day. He was caught every time. He appeared in a ever increasing list of
juvenile courts and was duly dealt with like Mother Theresa.
He often
crashed the stolen vehicle and one time even lost a leg. He then only stole
automatics…..every day.
The only thing that stopped him was prison. At
least he met the rest of his scum family on regular basis as they were also
locked up.

So Hollywood got it wrong — it isn’t RoboCOP — it’s RoboCOPCAR. Call me a
cynic, but this is all going to end in tears. I’m all in favour of catching
the baddies, also of keeping our boys in blue safe. But we shouldn’t be giving
them any more toys to play with.

They are already abusing the Tasers we gave them. And a lot of them are
pleading to go on the streets armed, to play cops and robbers for real. And
now the RoboCOPCAR, a great big remote-controlled death-dealing device, for
big boys who aren’t as good as they think they are.

There are two angles here. Firstly, it

I approve of your reasoning Kingbingo.

WTF is that thing supposed to do anyway?

I don’t care about any of the drawbacks. I WANT ONE!

I agree with you Julia – The Scarab should come with at least a young
Harrison Ford or Jeff Bridges in charge of pressing the right buttons.

Due to cutbacks in Government expenditure I’m afraid you will have to
make do with Nick
Frost driving a Reliant Robin backwards.