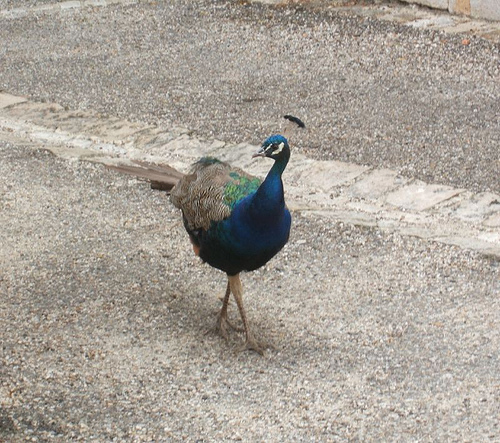 Some 20 years ago, a pair of peacocks arrived in this village – from whence we know not. They made their home in an old shed on the edge of the village, and raised a fine family.

Frederick, the handsome chap in my picture, and his wife Marie, were their direct descendants.

The route from the old shed to my neighbour’s kitchen window was tortuous; involving five different changes of direction, and a distance of some half kilometre, but nonetheless, every night at precisely 7pm, as the church bells rang out Vespers, Frederick would come trotting down the road, always walking, not flying.  He would set up camp outside Dominic’s window. There he would plaintively let rip his insistent and piercing call until Dominic broke off some of his evening baguette and throw it out of the window in small pieces. We would marvel at how and why the bird was so punctual.

Last year Frederick was run over by a passing lorry driver, whilst Marie was at home hatching a new brood.  With no one to forage for her, she only managed to keep one of her chicks. We called him Dominic after Frederick’s ‘friend’.

Dominic is almost one year old now, has just turned colour, and is starting to grow a distinctive tail.

One night last week, as Vespers rang out, we heard the familiar harsh cry outside our window. Both we and our neighbours looked out in amazement.

There stood Dominic, in the exact spot that his father – who he never met, remember? – stood in every night, at the precise time, looking up at the exact same window. Dominic threw him some bread.

Surely it must be coincidence? Except that he has been back every night since.

Surely he was just wandering around and ‘happened’ to be in the same spot? Perhaps now he has been rewarded accounts for his return?

Can anybody offer a logical explanation?

Any ornithologists out there?

I once had a parrot who religiously shrieked for peanuts at 4 o’clock every
afternoon.

We are visited by a family of woodpeckers who are certainly vocal for
their peanuts but who appear to eschew religion entirely!

At the end of our hamlet is a fine, grand house with peacocks in the
garden. A few years ago a pea-hen must have gone on a little adventure and
turfed up in our garden. She stayed for several months and we called her
Doris. She was as daft as a brush and we liked her very much. In fact I
suspect we liked her more than she liked us, as one day, as abruptly as she
arrived, she was gone but for another couple of months we could hear her
shrill song from round about as she toddled (v. slowly) back to the fine,
grand house to join the other peacocks.

No point to this story really. Just thought I’d say, like.

As for Dominic visiting Dominic as Frederick used to, maybe there is some
genetic memory involved. After all, their heads aren’t full of much else, are
they?

They are wonderful creatures aren’t they?

They also like peanuts (daily), iced buns (occasionally) and croissants at
the weekend.

As to what goes through their minds, it’s a mystery to me, but they come
running when they hear the peanuts hit the bird table.

By some way the best moment of my day.

You’ll have the ‘Nurture’ crowd sending you off to the re-education camps
Anna. Definitely not on message.
But yes, there is a lot of evidence of
this sort of thing occurring in the animal world, but not any accepted theory
of the mechanism that I’m aware of.

Memory carried on in genes ?
I believe this is a theory about behavioral
patterns in animals.

Of course, they will eat a variety of things, not just baguettes..

Whatever the reason, it’s a charming tale!

Rather than being shocked that they all behave that way your friend needs
to encourage them to back to work. Hunting out whatever peacocks hunt.

There wouldn’t happen to be a large pile of peacock poo that Dominic can
smell would there? Or perhaps Marie sometimes accompanied Frederick to the
window but was not seen and has since shown Dominic where the food is.

If bees can tell each other where the grub is by wiggling around I suppose
birds could do the same vocally.