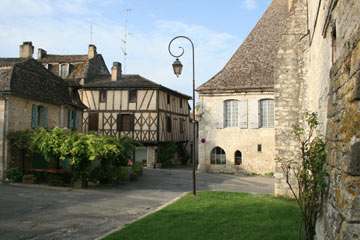 Show âem what youâre made of.

Listen up, and Iâll tell you a story.

It seems only yesterday that I wrote of the vicious attempt to intimidate me by a group of people that couldnât attack my argument. I said then that it would have unforeseen consequences. I didnât imagine what they would be.

Knowing that someone I had trusted as a friend was working behind the scenes in an attempt to hurt me did become a temporary blip on my usual cheer.

There were many kind messages of support on my blog that meant a great deal. One of them, from a Frenchman who name didnât register, pointed out that, having seen my address published, he realised that he was a mere 20 km away. He followed it up with an e-mail asking if we could meet.

âYouâre too trustingâ said Mr G. âLast time you did that he turned out to be as mad as a box of frogsâ.

True, you never know who is really who on the internet.

However, the e-mail had told me who he was, and it was verifiable. Letâs face it, the only reason I have things to write about is the life I have led, and that has involved taking a lot of leaps into the dark.

âHe only knows you used to live in Issigeacâ, said the terminally sensible Mr G. âArrange to meet him in public, centre of Issigeac, and I will be just around the corner in case it all goes horribly wrong againâ. I am blessed with a saint of a husband â he looks after me, guards me, but never, ever,  tries to control me.

So I did. Yesterday.

Except that he wasnât. Definitely wasnât. Hunchback of Notre Dame that is.

Outside Annieâs stood one of those suave and snake hipped visions of young male perfection that Paris abounds with, rarely seen in this neck of the woods.

I instinctively sucked in my stomach and raised my head in a futile attempt to look more femme fatale than ageing blogger and glided forward. Blimey!

âMadame Raton Laveurâ he said as he bowed his head and took my hand. My brain struggled with both the French and the influx of hormones. Did he just call me a washer of Rats? âEt Ms Raccoon aussiâ. âThatâs betterââ¦â¦.âshall we take coffeeâ?

No, I led him round to the impossibly romantic La Trellis, situated between the Chateau and the grand Bishopâs palace. The dappled shade from the trailing wisteria overhead wouldnât be so harsh on the wrinkles. Vanity be thy name.

We passed our florist. A keen voyeur of beautiful young men. Pierreâs eyes nearly popped out of his head. He looked daggers at me. Tough Pierre!

Seated in a secluded corner, partly shielded from public view by the Bougainvillea, with fronds of wisteria draped all around us, he leant forward and whispered âun petit cadeauâ as he pushed a small punnet of fruit towards me. No ordinary punnet of fruit â this was so very, very, French. Wild strawberries in white and red, raspberries both yellow and crimson overlaid with carefully selected wild cornflowers and wild orchidsâ¦â¦.

Double wow! If this is where being âoutedâ gets you, colour me âoutedâ â as many times as you like.

His eyes never left mine, in that manner perfected by Frenchmen. He was oblivious to Pierre the floristâs head, dodging the fronds of wisteria, temporarily green eyes sparkling, trying to get yet another glimpse. Nor John-Paul who normally uses the same technique on his tourist clients, but had now emerged from the tourist office and was surrounded by the customary gaggle of tourists, but was extolling the virtues of Issigeac with eyes sharp left as he tried to figure out who was monopolising my attention. Nor even Mr G. whose face appeared periodically over his shoulder with quizzical expression. The village was alive trying to work out who this gorgeous young man was.

I knew; for by then some two hours had passed, during which the lovely Laurent had explained to me how he came to be in charge of Wikioâs UK E-Blogs â a European review of Blogs â which is being launched today in Beta versionâ¦.and how he had been reading my blog along with hundreds of others trying to find the right British blog post to spearhead their new product when he had seen the âIntimidation and Coercionâ post and been moved to commentâ¦and how he had selected one of mineâ¦.

Triple Wow! God has given me a gorgeous young man to sit in the afternoon sunshine with, and strawberries, and raspberries, and coffee and chocolate and Wikio are translating my post into French and German and Italian andâ¦..

âKnit-a-tit!â I screeched. All the thousands of words Iâve laboured over and it was to be âKnit-a-titâ which was to see me join the doyenne of British blogging, Iain Dale, on the European blogs? (Just as well he didnât find this one, eh?)

âMais Oui, it was perfect, about 300 words, witty, factual, and has a wider political appeal, just what we were looking for in factâ

Oh, who cares which blog post! Ms Raccoon is now Fraulein WaschbÃ¤r in German, Madame Raton Laveur in French, Signora Procione in Italian, and will shortly be SeÃ±ora Mapache in Spanish. Your Raccoon has gone International! Embedded along with Iain Dale â now thereâs a turn up for the books! Whoâdathoughtit-tit-tit?

Laurent is looking for other bloggers â donât let this opportunity be wasted on all the hundreds of male bloggers ladies, if youâve got it, flaunt it. E-mail him.  laurentdelpit@sfr.fr

Stroke of genius on the part of Dan Levy at Wikio, employing him. Laurent could charm the birds out of the trees, even this old Turkey flapped her wings once or twice for old times sake â and landed on the ground with a sickening thud â I met up with the still lurking Mr G, some three hours later.

âSo I noticedâ said Mr G. âYet again Ms Raccoon arranges to meet anonymous blogger and I end up with no dinner â you were going to have a quick coffee and then do the shopping if I remember correctlyâ.

But I know the way to Mr Gs heart. Laurent also told me of this wonderful Chateau for sale â for just one euroâ¦â¦yes, Mr G is a firm fan of Wikioâs âLaurentâ now too!!!!

Wonderful, Anna. And much deserved.

It takes time you know.

So charming is this story that it hangs around in the mind ;  so
I started to ponder the alternatives to the hilarious

Iâm sure they wonât be bothering with mine, not unless they have the
international book of swearage handy!

In fact the whole episode sounds like the entire script of one of those
arty French filmsâ¦â¦â¦..

â¦â¦especially since a subtle revenge was delivered via unsolicited
appreciation of competence in your chosen art form (le bloggingâ¦. or whatever
you will have to call it from now on in translated form).

BTW, I clicked on the chateau you mentioned, and then clicked the little
Union Flag to translate the page into English ( French is not my forte).

I hastily scanned the page and about halfway down the words âthe comfort of
a vulgar dwarfâ jumped out at me, apparently available for the miserly cost of
just 250,000 Euros.

I hastily scanned the page and about halfway down the words

We French just love to hate our little president, from what we read
here and there, little both physically & intellectually. Our blogger
was referring to spendings made for a European agenda in Paris. There was
some controversy about it last year, as there seems to be a controversy
each time our wonderful president opens his mouthâ¦ [is it due to the
Sarkozy voodoo puppet http://difray.blogspot.com/ secretly hides from everyone?
maybe…]

âEre, watch it, mate. Heâs my President too. And I think heâs
lovely.

I have absolutely nothing to say about his er, lovely Italian lady
wife, except that it would look better on me.

Rat-washing? Still itâs better than sitting by the guillotine and
knitting.

Well done Anna and many congratulations.

Congratulations! Oh to be swept off oneâs feet

I really must kick myself with a cloven hoof and get my keyboard back out
from behind the sofa!

I must confess that Pauline Lancs was my favourite thoughâ¦

Thatâs great news, Annaâ¦ One day Iâll be able to look back and think âI
knew her when she was just washing the odd rat for a living. And now â sheâs
Dame Anna Raccoon, and employs a staff of hundreds to wash her rats for
her.â

If there are any more chateauâs â chateaux? â put me down for ten.

Ha, thatâs brilliant Anna! I wonât be emailing Laurent though â strictly
500 words a post, me. Plus Iâd love to see what their translators would do
with âfrobble-jammedâ

Thereâs me thinking being out in France cuts you off from most of the UK
blogging related adventures, too. Shows what I know!

500 is all right. We have to keep a length criteria. We translated and
published 600, 700 hundred words posts. And sometimes, the blogger agrees to
shorten it a little. Join us !
email me at laurent.delpit [at]
wikio.com
Cheers!

Hey Anna ! Hereâs the pic i told you about ! http://twitpic.com/1x7uwz so
that everyone can see not everything was sheer fantasy !
Welcome onboard
Anna, and welcome to all UK bloggers (the ones that spend time checking their
sources, knitting reliable posts, witty, intelligent, etc. but not everyone is
Anna Raccoon). Thanks Anna! And Iâll send your wonderful post to my
english-speaking acquaintances, friends, enemies, and see who ask to marry
meâ¦

Our European sweetheart has done it again! Lovely post, Anna, Laurent is
truly a gem, and BTW, welcome in the Italian blogosphere, where âKnit-a-titâ
is translated âUna tetta fai da teâ and could launch a new Italian cottage
industryâ¦

Well done you, every cloud has a silver lining as the old saying goes Ms
Raton Laveur! Priceless (rat washer comment) loved this post made me really
smile! Go Girl and ENJOY!!!

It couldnât have happened to a nice Raton!