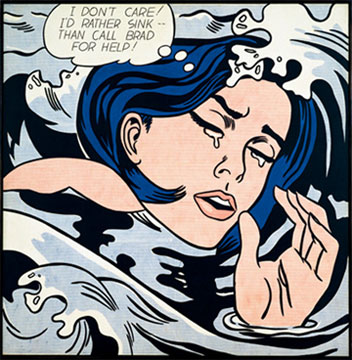 When a raft overturned on the Clear Creek in Arkansas, one of the casualties was a 13 year old girl who had been undergoing training in the art of piloting a few rudimentary logs roped together through a maelstrom of turbulent water.

One guide swam to shore and used his mobile phone to call the emergency services as he saw the girl swept down river.

The other guide swam after her, braving rapids, rocks and other detritus.

By the time he caught up with her, the emergency services had arrived.

Following full health and safety procedures, they were consulting their rule book, assembling their ropes, ladders, briefing their rescuers and ensuring that they had done a full risk assessment and were properly attired.

Meanwhile, our intrepid guide was still battling his way down river through the rapids in pursuit of his drowning 13 year old student.

He got out of the river and ran the final distance in order to arrive at a point before her. He jumped in again, swam out to her, successfully saved her and brought her to the shore. Whew!

Er, not so whew! The official search and rescue team were furious. They complained to the sheriff. Not their fault that they had to follow the correct steps before they actually did anything was it? ‘Elf and Safety innit?

28 year old rafting guide Ryan Snodgrass has been charged with ‘obstructing a government operation’. No really, he has.

“He was told not to go in the water, and he jumped in and swam over to the victim and jeopardized the rescue operation,” said Clear Creek Sheriff Don Krueger, noting that his office was deciding whether to file similar charges against another guide who was at the scene just downstream of Kermit’s Roadhouse on U.S. 6.

The boss of the Rafting Company has said:

“Making contact immediately with your victim is essential. It’s not about who is in charge. It’s about the safety of a 13-year-old girl. You are going to do everything in your power to ensure the safety of your guest, and if that means in Idaho Springs you get arrested, well I guess we’ll just get arrested.”

The only good side of this is it demonstrates that there are fuckwits in
the USA as stupid, brainless and wretched as there are over here when it comes
to the emergency services and the police. We are not alone. Otherwise you
could be forgiven for thinking we have a monopoly on this sort of nonsense.
Health & safety law should not apply to these rescue services or the
police FORCE!

what the papers never say……..

no of course we dont want people injured or killed at work.

but the rules are often stupid.

and what about brown and darling?
13 years of pissing money away to
massage the dole figures has got us into a real mess. and the banking crisis?
didnt those two shit themselves and actually bail out the banks?? none of us
asked for that! who arranged the hbos takeover? oh i remember-it was thought
up by the worlds worst gold trader-mcmental ………arranged with his ‘friend’
victor blank. (so much for his hatred of the rich +toffs)

it is the same for nations too…………

open your eyes and stop spouting bollocks .try thinking for yourself.

she eats babies!
she impales 100 children every morning!

I just wanted to say that because of the general trend of this blog.

Of course if one stoops low enough and scrapes the proverbial barrel, one
can always find barking mad stories, enough to denigrate anything or
anyone.
But let one person here who is indulging in their chosen sport of
Gordon Brown knocking (he is no longer PM time to move on) cast the first
stone when health and safety is interfered with by this ridiculous dimwitted
government, just for the sake of interfering with it and a child or children
get her or God forbid worse needlessly. There were reasons why this was
brought in and it has already been modified, however, would I expect the grey
lady to stop playing political point scoring with health and safety at work?
Or in schools etc? Of course I would not, too good an opportunity to miss.
Notably the people that quote the daft stories are no doubt the same kind (or
possibly the same people) that would quote the silly stories about straight
bananas and cucumbers and the size of one’s sausage regarding the EU (they
pick these stories up mainly from the Sun apparently – say no more!)
When
next at work you, your husband, son father, mother, daughter, grandson,
granddaughter etc is asked (or forced) to carry out an unsafe procedure by a
Tory cost cutting wet behind the ears boss and if you refuse, you are told do
it because there are now over one million more Tory unemployed on the register
waiting to take your job, they fall and are met with a horrific accident, I
hope you all remember you celebrated this insane government and their idiotic
messing, for the sake of messing. In the words of “Scameron’s” idol “if it
ain’t broke – don’t fix it”!
However, carry on throwing the baby out with
the bath water, it will not be too long before all of us realise we have an
inexperience economically illiterate government in place, lead by a PM that is
proving to be a megalomaniac tin pot dictator. Then the “fun” will truly
start, if he thinks people will go quietly, he is in for a very rude
awakening.

How good Brown and Darling must feel now they have been totally vindicated,
the only thing Sir Alan Budd (yes THAT Sir Alan Budd- who got his knighthood
from the Tories) was to be able to manage to shave a fraction of percentage
off off Darling’s growth predictions and you don’t have to be qualified at
Westminster or Oxbridge to understand of course growth would have to be
forecast downwards, in fact we will be lucky if we see growth at all, these
insane Tory cuts will take care of that.
Sir Alan Budd forced to concede
that if labour had stayed in power they would have almost cleared the
structural deficit inside the next parliament and they would have done that
without causing misery to millions.

But hey carry on laughing (while you can) making one million public sector
workers pay for the greed of city bankers may seem amusing to you, but when
that one million are out of work and have been forced into orange high vis
vests for litter picking duties because they cannot find another job try as
they might, it is not only they and their families that will suffer. It will
be the housing market, the building industry, the soft furnishing stores,
supermarkets and local shops, the knock on effect will be enormous.

Yes have a good laugh at health and safety rules, it may be the last laugh
you get for a few years, unless this insane pair of ex PR spin doctor spivs
are kicked out before they manage to gerrymander parliament and change our
constitution and make even that impossible.

It is interesting that all the English speaking countries are going crazy
in the same way at the same time.

Reading the article and comments on the Denver Post it seems that it is not
so clear cut.

The girl was lost for over half an hour before the guides found her, thats
why the rescuers (volunteers) managed to turn up so they were probably worried
about others having to be rescued too. However, the girl had managed to swim
to the other shore downstream. It took the guides just over a half hour to
find her. From the sounds of it the guide swam across the river and was most
likely trying to keep her calm and warm her up while they waited for the
rescuers to do their job.

Having said that, to charge the guide is just plain stupid. It comes across
as petty and vindictive for allegedly getting in the way of the “professional”
rescuers. So not a H&S issue (mores the pity because its one of my pet
hates) but an issue of bad media management by the sheriff’s office and crap
decision making in charging the guide for attempting to do a good deed.

One of the commenters to that story recounts having Sheriff’s Officers (I
think) drawing guns on people who wanted to help at other
emergencies:
“I’ve been turned away, at gunpoint, by SO’s who told me I
couldn’t fight a fire because I wasn’t insured.”

I wonder if ALL our police officers, including the ‘thought police’ police,
were armed whether this story would be about body retrieval rather than a
rescue:
“A Strathclyde Police spokesman said: ‘It is not the
responsibility of the police to go into the water – it’s the fire and rescue
service.’”

Just think of the book George Orwell could have written had he been able to
glimpse the state enforced madness of today.

Something about truth, strangeness and fiction ?

Makes one ashamed to have been a member of the ship

Do you think they would “follow procedure” if Sheriff Don Krueger had
fallen in the water? No, me neither. What a hopeless and idiotic mindset the
elf has created.

The parents should sue the ‘Rescue’ service for dereliction of duty and
give the pay-out to the proper chap who saved their daughter.

Unfortunately, that would also put money in the hands of the lawyers who
started the defensive health and safety culture.
The solution proposed by
Dick the Butcher in Henry VI Part 2 has never been bettered.

Remember the old American frontier spirit? When men were men and women let
them be men? Remember Pauline trudging through the ice with the baby on her
back? Remember all those Buster Keaton stunts, most of which were REAL and
performed by Buster himself? Remember
a-man’s-gotta-do-what-a-man’s-gotta-do?

No, neither do I. All gone… all forbidden by ‘Elf an’ Safety.

Quite right. Correct procedure is more important than correct result.
Bureaucracy rules the world, we have the power!

Ps: You can never have too “much”, sigh

Proof – if it were needed- of what Brown kept refering to, namely: A New
World Order.

So much much for the gradual return of sanity with the removal of
NuLiebour, it’s worldwide.