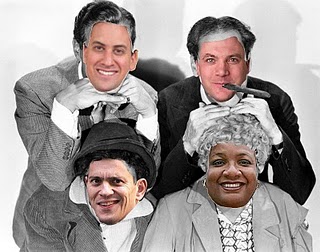 Hilarious sibling performers who entertained millions with their comical antics.

[…]Their parents Tonia Blair and Gordon Brown were brought up in the bleak poverty stricken Old Labour lands and after the (well deserved) âThatcherâ massacres, emigrated to New Labour where they thrived and made it big in the vaudeville theatres of the BBC.

Their father Gordon changed his name to Karl Marx and helped nurture their comical ability. In later years, he disappeared into an asylum and was never heard from again.

There were five brothers in the original stage act:

There was a sixth brother who sadly died in his infancy:

They became very successful in the 2000’s and received rave reviews in their regular Broadway (Shepherds Bush) appearances: “Labour Conference 2005”, “Goldiggers of 2006”, “Tax’n Spenders 2007” and many more.

Most of the public are only aware of the three older brothers Grouchy (Ed Balls), Harpie (Diane Abbott) and Cheeko (Dave Milliband) who went on to greater fame on the screen with their finely tuned routines.

Who can forget Cheekoâs hilarious and skilled performance with his banana as he gave the impression of someone speaking drivel, like anyone was really interested. Or Grouchyâs (Ed Balls) clever use of double-speak as he backtracked on major policies within hours of asserting the complete opposite. And of course Harpie was a favourite, often regarded as the âdumbâ one, she later wrote of her angst-ridden times as a parent sending her child to a private school in the best interests of the taxpayer.

Cheeko was so-called because of the endearing way he always held his tongue in it. His famous banana act made him the worldwide laughing stock of the day. However his world wide exposure and his delusion of his own popularity almost split the brothers but they were reconciled when he later took pity on Harpie and helped her with her act by sponsoring her in the notorious âNomination Papersâ.

Harpie (Diane Abbott) was well known as a polished rent-a-quote performer on the Westminster circuit and she could be counted on to opinionate on anything, especially things she knew nothing about. At one time analysts observed that she even made more TV appearances than the âGrand Old Manâ of rent-a-gobs, Stephen Pound the Labour MP for Ealing North with his regular afternoon Housewifeâs Favourites slot on Sky News.

Many accused the brothers of âbeing the sameâ and some referred to their oxbridgeness but Harpie cleverly differentiated herself from her siblings by showing a carefully crafted hypocrisy, fake Afro-ness and succeeded in becoming loathed for her smug double act with the famous BBC clown Slimy Portillo.

The other two brothers, Zeppo (Ed Milliband) and Gummo (Andy Burnham), are hardly recognised by the public these days. They lacked the intense sense of self-worth and rank hypocrisy that set their older brothers in a league of their own.

When interviewed recently, Zeppo (Ed Milliband) recounted the many times that people would tell him âA table for two please waiter.â. It seemed that the more he desperately sought fame the further it would slip from his grasp.

Gummo (Andy Burnham) was even more unknown to the wider electorate. He was frequently frustrated by having to remind political editors that he didnât work for the Cleggo Troupe across the road and was in fact the âFresh Bloodâ in the New Labour Act.

Even though many have seen their act countless times, the Brothers never fail to raise a laugh or a chuckle. Many DVD compilations are sold of their brilliant performances and will be cherished way into the next few days.

Another bad performance â Grouchy Marx worked with a faded cross dressing actress for a while. Both desperately sought attention but were rebuffed by the voters.

The Marxist Brothers and relatives on a family outing

Anna sorry it was,nt you but parrot sorry parrot it was great

Anna you pinned the character of the satired,spot on not an easy thing to
do

that was one of the best satires i,v ever read ,

Harpie livens it up: