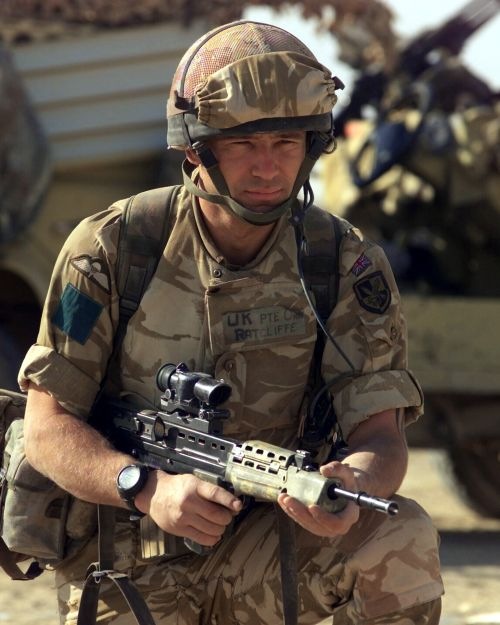 There is a paradox facing those who have responsibility for equipping âour brave men and womenâ. Our soldiers are braving death and disfigurement on our behalf and they deserve to be properly armed and protected as best we can. The deserve to have decent equipment, appropriate armoured vehicles and decent logistical support.

Even in the best of times, money is not always in plentiful supply. Imagine what a crisis is facing those decisionmakers now.

But what really seems to be a major issue is the jingoistic calls to âbuy Britishâ to deliver the âbestâ weaponry to our soldiers. Now, if youâve been paying attention, youâll have noticed several news reports pointing out that our troops have got the wrong vehicles for the terrain, they havenât got enough helicopters, our threadbare Nimrod surveillance planes are asphyxiating their crews, etc., etc., etc.

The problem, of course, is that our military shoppers are bombarded with outrage at the merest idea that you might want to buy any of our equipment from outside the UK. Yet we could buy three American helicopters (that actually work in Afghanistan) for the price of one British or European one (that doesnât). We could easily buy âoff-the-shelfâ military vehicles that are properly armed against improvised explosive devices, rather than wrapping Land-Rovers in two layers of extra thick Bacofoil while âBritish engineering geniusâ tries to get the vehicles we ordered a decade ago to travel further than 200 yards before they conk out.

Dozens, if not hundreds of people are dead today because of government fear of not âbuying British.â

When people are literally dying because of some outdated dogma, is it not time that we should ask questions?

Remember when the SA80 came in. The number of clearance checks slowly
increased as the number of NDs increased. Wasnât the weapon it was the
soldiery. Honest, Guv. Piece of crap. Not a patch on the FN FAL.

Going back to a previous post about police and military shooting, remember
watching an RAF officer on the range at RAF Uxbridge go automatic and send a
burst into downtown Uxbridge.

Absolutely right. we should buy off the shelf US helicopters and US assault
rifles too. They make great kit. So do the Israelis. An assault rifle you can
totally immerse in water, shake it once out and it fires without blowing up.
Why oh why do we try to build all our own kit or buy it from foreign companies
that refuse to then sell us bullets as happened for the SLR during the
Falklands? At least the Yanks wouldnât do that (I would hope).

The 5.56mm round is standard across western forces so its a non
issue.

^ That little book says it all better than I ever could.

I would echo what Paul says â Richard North has loads of fascinating
articles about the MoD and the European dimension on his websites. I link to a
couple of pages in the following:

The basics of mine resistant vehicles have been known since the 50s or so.
We even had some early MRAP-ish type vehicles in Bosnia for the bomb disposal
crews. The lessons learnt years ago on how to mitigate the threat of
explosives under vehicles were forgotten or ignored.

Mine resistant vehicles have been in use in African states for decades and
there are no decent excuses for British forces not being equipped with them
far sooner. Once it was clear our vehicles were inadequate things should have
moved quicker. The MoD was resistant to this until it had made sure the
funding for the current crop of MRAPs wouldnât come from future MoD budgets.
Got to get your priorities right! There is also an element of using kit
correctly. If youâve got vehicles that are great for keeping off the beaten
track (Vikings) but arenât so hot at standing up to IEDs then donât be using
them for regular patrol routes that the Taleban can mine.

With helicopters we had the opportunity to make Blackhawks under licence
but it didnât happen. We made Apaches under licence at an extortionate cost
and now donât operate enough of them.(It is said that we could have paid each
Westland worker

I think youâll find the requirement isnât to âbuy Britishâ, but to buy from
our âEuropean partnersâ, but the funding of the military, and spending
decisions, are a lot more complex than that. Richard North, over at EU
Referendum, is definitely the âgo toâ man to better understand the woeful
state of military procurement.

Perhaps they are just better fighters than us? Their tactics, leadership
and commitment are better. Our bureaucracy is still better than theirs. There
may be equipment issues, but surely we are still far better equipped then
them?
Just a thought.

So we have a system that allows intellectual property rights to take
precedence over life and death?
I suspect there is also a commercial reason
to keep using UK equipment, the forces are in effect acting as the shop window
for the UK defense industry so that the industry can sell to 3rd world
countries.
I find it depressingly and sickenningly immoral.

Itâs all very well saying buy foreign if itâs cheaper off the shelf but
consideration needs to be take about who owns the intellectual property rights
for systems that may be operated for 30 or more years. Mid-life upgrades,
add-ons etc, spare parts even can be very expensive otherwise. For example, an
American company that supplies the US armed forces as well as ours with the
widget Mkiv will be unwilling to cut its catalogue price to us or permit a
third party to make copies of the widget because it is expected to make its
profits from foreign sales.
What is needed is a realistic defence review
and a realisation that we cannot combine national defence with acting as the
worldâs policeman/socialworker to big up the foreign office. Even a province
in Afghanistan cannot be fought with a reinforced brigade which is all we can
field at present. Therefore, smaller scale, smarter interventions should be
planned and catered for in order to concentrate scarce resources on protecting
vital national interests. Take a look at the Defence of the Realm and
ThinkDefence blogs to see how theâ underfundedâ MoD wastes a significant
percentage of its budget. Itâs partly because in trying to be a Jack of All
Trades it spreads its money too thinly and loses much through evaporation. And
then because it hasnât got the right tools for the job it hope to rely on
experience to muddle through with what it has. Often the wrong lessons are
learnt or the experience is inappropriate. Hence in Iraq and Afghanistan our
brass lectured the Americans on Malaya and Northern Ireland whilst forgetting
the lessons of Cyprus, Aden, Oman, Bosnia (lEDs countered by mine protected
vehicles etc). This meant that soft hats and Snatch Land Rovers were issued to
fatal results. The troops lacked suitable patrol vehicles because, despite
thirty years of failed projects and collaboration, nobody could decide how tho
replace the CVR(T) family with a patrol/scout vehicle that ticked all the
boxes. For want of a nail etcâ¦

John RS, your suggestion and comments have the ring of truth and display
logic and common sense. Therefore, the âSir Humphrysâ and politicians will
have nothing to do with such naive comments. Where, after all, is there scope
in your comment for lobbyists, graft and corruption?
I suppose the most
depressing thing about being a cynic is how often one is proved right.

I suspect your analysis is far too soft on the Whitehall seatwarmers.
Equipment issues were first raised in the Iraq war and are still being
highlighted today. Given the lack of so many major items better suited to the
current conflicts than the crap the troops are forced to use (vehicles,
helicopters, weapons â even boots) I think a majority of the casualties will
have been influenced in some way by the cess pit that is the MoD Procurement
system.

So clear out the the top floor of the MoD. Put service folk in there not
more âcivvy streetâ seatwarmers. Ensure no-one is allowed in position of power
in there unless theyâve served a tour of duty in a war zone at some time in
their lives. Theyâll have much more idea whatâs needed and more drive to get
it on time. Support them with professional buyers from successful private
sector organisations to get the costs down. Open up purchasing to all global
defence contractors â stuff the cosy relationship with a couple of chosen
groups.

âSo clear out the the top floor of the MoD. Put service folk in there not
more

Spineless, careerist bastards in the Army not demanding the very best from
the MOD for the troops who have been committed without the slightest idea
about what theyâre supposed to be fighting for.

Brown withholding money from them will rot also.

Perhaps the Brits should talk to Canada, we seem to be leaving this year ,
it would probably be cheaper for us to leave the equipment behind.

Deaths are disproportionately due to walking patrols, helos or UAVâs are
the answer, military planners cannot bear to buy off the shelf US equipment,
it is too easy and would justify reducing huge numbers of unwanted planning
staff in cushy positions on home soil.

The managers are more deadly than the Taliban.

You overlook that piece of crap in the soldiers hands in the photo. Should
have gone for M16â²s years ago.

Jabba, Iâm not overlooking the weapon in the soldierâs hands, I intended
the caption as an ironic device.

Have you actually fired an SA80 rifle since the excellent GERMAN
company Heckler and Koch upgraded it? I only ask because I have read no
criticism since then. The UK has not had a âbuy Britishâ policy for years.
If it had then some of that

If the SA80 is so shit hot, why do all the sections of the military
that have a choice over what weapons they can use, always start by
binning the SA80 and going for something else?

Itâs a disgrace: virtually no progress has been made since the first Gulf
war, when field experience showed just how unsuited the standard issue
weaponry was in desert conditions. All those MoD desk-bound fellows â more
than the number of front-line forces â have not responded, so, as you say,
many deaths have resulted needlessly.