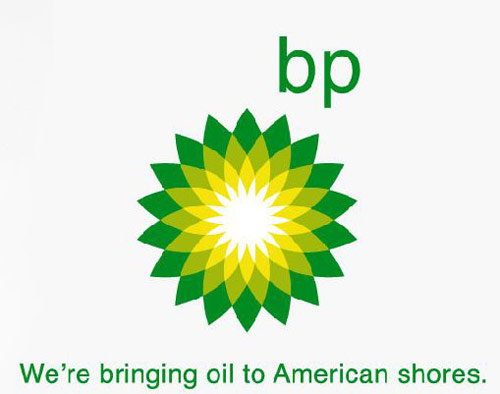 Kick Tony Hayward up the backside. Irresponsible lout. What was he thinking of?

Pushing the bounds of technology, just like the American government wanted. Making America less dependant on imported oil. 50% of your oil imports are from those nasty terrorists overseas â remember?

BP employs 22,000 American citizens versus 10,000 British citizens. Most of the workers on the rig were US citizens. The rig was run by two US companies. Most of the safety equipment that failed was US made.

BP hired that rig. I donât hear you mentioning that.

Youâll use less imported oil. Firms like BP wonât be driven by their stockholders to push the bounds of technology to bring oil to American shores. Theyâll take their nasty technology away â and put it in places like Kazakhstan.

Feel free to buy your oil from there.

They Canât It will have been factored into the cost of the project for BP â
the risk of a subcontractor snaffuâing something. Unfortunately it has
backfired bigtime .

xpect some long drawn out court cases in a few years time and watch the
yanks try and squirm out of any liablility for shoddy work.

I wondered that too. They have taken the blame without pointing out that
the rig and the safety tests were overseen by others. I think what it comes
down to is that itâs costing vasts amount of money, and the only ones who have
it to spend are BP.

I honestly donât see why BP is not pointing the finger continually at
Transocean.

I hear Obamaâs going to have a floating grandstand positioned over the leak
to facilitate his high profileâ¦ erâ¦ grandstanding.

Itâs going to be equipped with state of the art megaphones. Looks as though
Halliburton may land the contract.

I am really going off him, you know. The Brave New Dawn.

But I have to be a bit careful or they might do me for Racism.

Itâll be stopped but not until August. Theyâre drilling two wells adjacent
to the leak. This will relieve the pressure at the leak site and make it
easier to cap. Itâs a bit like turning on every tap in the house. The pressure
at each tap drops the more taps are running. Theyâve to drill 5000 feet into
the sea bed though which is why itâs taking so long. The top hat and junk shot
thing are required so that people think the oil company is actually doing
something in the meantime.

The top hat and junk shot thing are required so that people think the oil
company is actually doing something in the meantime.

***
That sounds about right to me â anything but the truth. Iâm
grateful to you for explaining it. What you say means what I said isnât too
far wide of the mark, I think. The quick-fix was nothing but pie-in-the-sky
but the experts would rather have a playground punch-up rather than admit
this spill was always going to be huge because it canât be fixed
quickly.

If BP is partly owned by the US and a massive âBPâ leak is contaminating US
shores, if it isnât fixed by now that means it canât be fixed. Hence the panic
and the blame. I donât believe for one minute that all the US BP employees and
other US Oil industry experts have been sitting back twiddling their digits
waiting for UK BP to repair the rupture, rather than trying to get the oil
flowing back in the nice lucrative pipe instead of into the sea. Even weeks
ago it would be costing them too much money for it not to be a shared problem.
Thatâs why I think they just canât fix the thing and instead of saying that,
everyone would rather fight about whose fault it is.

And no â youâre not supposed to feel sorry for us â just stop your Prez
(who most of us supported in the run-up to his election against the monster
Bush 43) from making stupid macho comments because heâs gearing up for the
mid-term elections, and needs to be âseenâ as doing something. It is a
TECHNICAL problem. You probably donât understand the word, as it has three
syllables, but it means you canât just wave a magic wand and get it
solved.

I see you have the usual American obsession to talk about âassesâ. It makes
you feel so big and tough. Obama is âlooking for asses to kickâ. We should all
âget our asses down to the beachâ. Very macho. You will probably âbet your
sweet assâ that the US could manage the spill better than BP.

Hayward made the comment about getting his life back because he was dog
tired â heâd been awake for longer than youâve ever been. But your MSM used an
innocent remark to crucify him â par for the course. You can look at the man
now and still see the tiredness in him.

Instead of the Prez â and you â shooting your mouth off, it would be nice
to see some quiet thinking and reflection before you open your trap.

Quite. You would have though people would have âlearned lessonsâ.

Kris
By they way have you ever heard of John D Rockerfeller ? He
founded one of the first oil coâs, it was called Standard Oil, it was
American. They changed their name to Amoco. They then merged with a company
that had originally been called Anglo Persian Oil. APO bought a German firm
called British Petroleum ( why would a German firm be called that? Because
they operated petrol stations in the UK and only the UK under that name)

The merged Anglo Iranian Oil ( the name changed when the country changed
its name) and Amoco became BP Amoco and then dropped Amoco a few years ago.
The company is still listed on London, Frankfurt and New York stock
exchanges.

By a strange quirk it was a US company ( then called Combustion
Engineering) that was a pioneer of deep sea, floating well drilling, oh and
they also operated Three Mile Island nuclear facility, you know the one that
blew up.

The decline of BP started with Lord Browne and his health and safety corner
cutting. BP got away with the Houston refinery explosion and deaths, but the
oil âspillâ is just that step too far.

Yes, the US government should have more stringent regulations but BPâs
âhey, itâs a big oceanâ, âIâd like my life backâ take the piss mentality is
asking to be slammed.

At least get your asses down to the beaches and clean up your own damn
mess.

Iâm sorry, are we supposed to feel sorry for YOU?

NB
And yes, it is a British company: BPâs HQ is near Moorgate. Itâs
registered in England.

I take it you are a Yank as itâs the kind of whiny thing Iâd expect. The
Brits having fought ( mostled US funded) terrorism for 30 years then have to
drop everything and support the US because you had a terrorist tragedy
inflicted on you.

If it didnât affect American voters Obama wouldnât care a monkeyâs. The
1979 Ixtoc 1 oil spill lasted for 9 months until it was capped and
sorted itself out within a couple of years.

Disgraceful, trying to confuse us with the facts. Why canât you go in for
fanciful fiction like the rest of us?

And of course the US gets nice fat royalty from off-shore drillers â 18.5
per cent from BP in the Gulf.
Of course, while the oil is flowing into the
sea rather than into the USA, theyâre not currently picking up those
royalties.
There are moves afoot to charge BP the royalty anyway â at the
risk, perhaps, of highlighting the fact that the USA is an enthusiastic,
fee-collecting participant in the oil-drilling business.

We didnât start railing against the US when another of their rigs blew up
in the North Sea oil field.

The US are supposed to be the âexpertsâ in oil well drilling â at least
according to them, though when the crunch comes that doesnât appear to be
true.

Any dictator (which is actually how Obarmy behaves) when under presuure
from the citizenry invents an external threat to try to get the country behind
him and overlook his failings. This is no different.

The Community-Organiser-In-Chief doesnt have a clue how to handle a real
crisis as the most he had to cope with before mouthing his way into power was
to work out where the next free lunch was coming from.