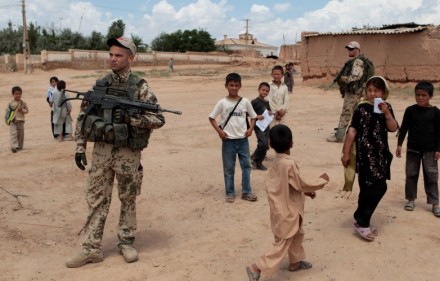 We are invited to let the Kharzi Kiddies tug at our heart strings again. The very use of the word children is designed to evoke a particular emotion. âYoung peopleâ doesnât achieve the same end. âTeenagersâ definitely doesnât. Children. We promptly think of our own defenceless innocents at six or seven years of age and our hearts go out to them.

The photographs used to illustrate these stories are invariably of six or seven year olds playing amongst the land mines in Afghanistan.

Thus we have Samira Shackle in the New Statesman railing against the proposed legislation that will allow them to âdeportâ âchildrenâ to a âreintegration centreâ in Afghanistan.  Even the word âdeportâ â a nasty word, redolent of nasty people, multiple rapists, war criminals, being strong armed out of the country for our safety â is invoked to rile our emotions.

Was it only yesterday that we were invited to condemn government legislation that âlocked upâ these âchildrenâ in detention centres?

âWe believe that locking up children, who have committed no crime, for months at a time is unacceptable in Britain in the 21st century. This commitment is a huge step in the right direction and we now await the details of how the new administration intends to implement the policy. We urge them to end this abhorrent practice as soon as possible.â

Now we are threatening to send them home again, and that is wrong too? Will nothing short of giving them their own fully furnished house and substantial benefits satisfy the bleeding heart liberals?

There are currently 4,200 of these Afghani âchildrenâ, who have managed to make their way across Europe to the UK and are now apparently the responsibility of the British Tax Payer as any alternative solution is âinhumaneâ.

The definition of âchildrenâ under the asylum legislation is those under the age of 18.

Certainly amongst those âchildrenâ there will be some of tender years, some vulnerable females too. However, there will also be some hulking 6â2â young men of admirable physique who were more than capable of getting themselves to the promised land without the aid of grim traffickers. At 17 years and 11 months of age, they are almost two years older than our own lads who have signed up to fight for âdemocracyâ in the Kharzi.

If we think that 16 is quite old enough to be considered sufficient of a man to join the army â and some 40% of our troops did join at that age, albeit that the government makes strenuous efforts to ensure that they do not fight on the front line â then why are we so sentimental about Afghani boys of 17 and near 18?

Why would Samira Shackle come out with phrases like:

âWe know that Afghanistan is unsafe and war-torn, because it is a war that we are fighting. It is very difficult to see how it is in a childâs best interests to be returned there.â

Personally I find it hard to believe that it is in the âbest interestsâ of a 16 year old âchildâ to be signed up in the UK army to fight in that medieval world, but it is.

The Scottish government is considering a âGuardianship Projectâ to provide additional support for âchildrenâ like the 15 year old strapping figure of Preston Kalunga who was âdumpedâ in Glasgow 6 years ago unable to speak English and with no passport. Hmmn. I doubt that his parents just happened to be passing through Glasgow and dropped him off at the Social Services crÃ¨che just before their flight left â either he was perfectly capable of getting himself here by fair means or foul, or someone was paid good money to bring him here.

Why is the question? Could it be the knowledge that once here, and categorised as an all important âchildâ he would be hooked into a substantial benefit system that was quite capable of being stretched to accommodate essential support for the rest of the family in a country where the equivalent of one pound will stretch as far as Â£100 in the UK. Send home Â£2 a week out of your benefit every week and you have just raised the average family income in the Congo by 50%. The average wage in the Congo is a shade over Â£200 a year.

It is time for us to re-evaluate our definition of âwhat is a childâ when we apply that term to people arriving from other economies and other cultures. To retain our sympathy and our fiscal assistance purely for those who really are in need and not just those who meet an arbitrary age limit drawn up by well meaning folk.

Those 4,200 Afghani âchildrenâ cost us around Â£2,500 per week each â Â£546 million a year according to my calculator â can we really afford to rail at the government plan to send a mere 12 of them â all boys â back to a Â£4 million pound purpose built resettlement centre in Kabul?

Less sentiment and a more realsitic appraisal of our financial situation is needed.

Why not conscript them into the army and then send them back with a gun to
improve the country they found so lacking that they fled in the first
place.

Yikes! Iâm indebted to you.

The rules say you claim asylum in the first safe country. Seeing as most of
these children/kids/teenagers/economic migrants will have come via France and
not on seven league boots direct from the Middle East, why are we sending them
anywhere other than Calais? Tipping another

I wonder how many of these free loaders, sorry, âasylum seekersâ would keep
on arriving if they had to work and pay tax for 10 years before they were able
to get any benefit money hand out. Also we should deport any found working and
not paying tax.

Remind me again, just why are they our problem?

I can think of several children that I would happily send to Afghanistan,
but none of them are Afghans.

I agree with you on sending Afghan âboysâ back, but with the way girls and
women are treated in Afghanistan I think we should think twice before
deporting them.

I donât know how many of the 42,000 children are girls, but if any girls,
or women, donât want to return to Afghanistan we should treat them with a bit
more compassion while looking at their cases.

Benefit seekers donât even have to reach the UK to qualify. Weâre paying
benefits to overseas families as it is. And the International Aid budget is to
be ring-fenced, while those paying for it face an increasingly grim future,
according to Camerclegg himself!!! Iâm only guessing here, but I feel sure
that, of the planetâs bloated population of 6 billion and rising, there must
surely be at least a billion people living less than satisfactory lives. And
of course the British taxpayer must support them all, or at least the despots
and their cronies who intercept much of our money. I thought charity was
supposed to be voluntary â not in the UK itâs not.

The proper way to gain residence is by hijacking an aircraft & forcing
it to fly to Stansted.

Worth bearing in mind that a lot of these âunder-eighteensâ donât appear to
be under eighteen at all! Very difficult to prove and, given the âItâs only
moneyâ attitude that seems to prevail, the authorities seem quite willing to
concede the point â and anyway , who are we to say that having a three-foot
beard and grey hair suggests that someone is over eighteen?

Still, in the spirit of compromise, I offer this suggestion:- we introduce
a system whereby everyone who wishes to support these âchildrenâ is given an
opportunity to do so. The supporter is allotted a âchildâ to support (chosen
at random by lottery) and thereafter picks up the every single cost of the
child. The child is not eligible for benefits, the supporter must provide
detailed accounts showing that they are spending a good sum on the child and
is also jointly liable for ANY crime committed by the child at ANY time. If
the supporter wishes to disentangle themselves they must go through formal
proceedings and the child will be deported. If the child is, for any reason,
unable to be deported then the separation will be denied and the bleeding
heart will be forced, by law, to continue supporting, and taking full
responsibility for the actions of, the child.

Kind to the taxpayer, kind to the child â whatâs not to love!

It is always horrible to see those pictures, and it is even worse to think
we are in some way resposible for the crazy world we live in. I guess we
should all focus on improve these situations, change them for the better of us
all. And, in my opinion the first step is to spread the word. Thanks for
sharing.