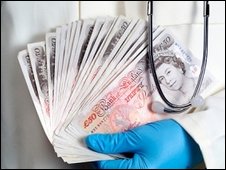 UK Doctors, hobbled by the law which says that they cannot treat a patient without consent, have resorted to the age old lure of money.

From next month, a team based at University of London will be offering those patients with bi-polar disorder or schizophrenia £15 each time they succumb to ‘grab a jab’ week. They could have made it £20 – but that apparently would have affected their Disability benefit, otherwise known as ’saving the tax payer money ‘ and that would never do.

This pilot scheme is only for 136 patients initially, but as news spreads of a potential £780 a year extra money to be earned out of the Doctor who signs your sick note, we can expect a clamour of patients demanding their ‘uman rites’ under EU anti-discrimination laws and paid to accept treatment for their ‘bad back’.

For the truly entrepreneurial unhinged person, there is another money making scheme on offer today.

The web site Internet eyes is offering a ‘not to be sneezed at’ £1,000 a month, for those long lonely hours slumped on the couch after you’ve been paid to take your medication like a good little person. You can earn this money stalking your friends and neighbours.

Internet Eyes will give you free software to enable you to monitor CCTV cameras worldwide – although naturally those in the UK, with an estimated one camera for every 14 citizens, 4.2 million of them, are likely to predominate. If you are ‘quick on the button’ – and there are likely to be thousands of others equally glued to their laptops – and yours is the first report of anti social behaviour, burglary or vandalism, then you will be entered into the ‘league reward table’ and have a chance of winning the £1,000 jackpot.

Order in the court!
Incapacity Benefit is paid at a higher rate than Unemployment Benefit because it is not your fault that you are too sick to work.

If you are refusing to take your medication then you are not fault free.

The remedy should be making Incapacity Benefit conditional upon taking the prescribed cure – not being given an additional income.

As for paying people to spy upon other citizens, this is the mark of a truly totalitarian society.

“The remedy should be making Incapacity Benefit conditional upon taking the prescribed cure – not being given an additional income.”

I find the conditional approach like this totally objectionable. This is the mark of a truly totalitarian state too. I wonder where all of this is leading….

I disagree with both remedies Blink.

I note the BBC is this morning carrying a story concenring some 250 people with ‘learning disabilites’ who are still incarcerated in hospital….and I am aware of no ‘cure’ for learning diabilities!

How can they justify incarcerating someone with learning disability and yet be up in arms at any suggestion that those in the grip of a dangerous mania should not be roaming the streets at will?

None of it makes any sense to me.

I want some of what they are on.

That ‘internet eyes’ is fascinating.

On the one hand it is a community policing itself and is liberalising the process. Expanding neighbourhood watch if you like.

On the other it is the single most Orwellian thing I have heard (well actually it is up against a lot of competition).

Our doctors are already taking the money. Paid £5.20 for each ‘Flu’ Vaccine’ jab they fool their patients into having.
Not bleedi” likely. I won’t be taking anything. My doc tried to get me on HRT and Statins.. I am still alive and healthy.

Doctors are also paid for asking you if you smoke. Really.