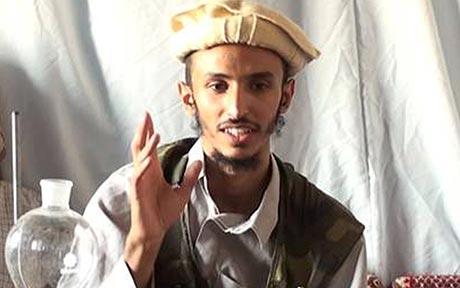 The remorseless search for those with the guts to give their all for Allah continues.

Richard Barrett, head of the United Nations’ al-Qaeda and Taliban monitoring group revealed the vicious viscera employed by the organisation that has recently failed to ‘awe’ its supporters.

It entrailed (sic) one al-Qaeda supporter talking pre-determined tripe by mobile phone to detonate the 100 grams of PETN explosive cunningly coiled in the intestine of young Abdullah al-Asiri, one of Saudi Arabia’s most wanted men.

Mr al-Asiri lost fæces when his bowel exploded – his left arm, which was the only recognisable part of him left, ended up embedded in the ceiling, though presumably he gained social status from his Halaal enema.

This has seriously alarmed the world’s security experts – and presumably the result of this offal tale is that the rest of us can now expect colonic irrigation to be a necessary pre-requisite of international travel.

Oh My God, that is disgusting, awful and obscene.

Why can’t I stop laughing?

I shall hang my head in shame. When I can catch my breath.

Don’t worry Sabot – it had the same effect on me.

I believe Mr al-Arisi failed to kill his intended target, so could this be considered something of a belly-flop?

Nope, only caught a bit of this.

Now that’s what I call a laxative! The poor bloke must have been a martyr to his bowels.

This blog is a disgrace. That poor man is going to be a great disappointment to all they Virgins.

Pentaerythritol tetranitrate,
as a laxative, beats sodium phosphate.
By extremist poltroons
it is prized above prunes
as it seriously bolsters their shite-rate.

Oh Nadgers, you have just finished me completely…….tears running down my face now. This is disgraceful.

It does also beg the question, how do the multitude of virgins in heaven do the business if his business end, so to speak, is missing?

Could it be that the poor fellow was sold a pig in the poke?

Now what would a good Muslim boy do with a pig, Jabba?

Except that it wasn’t Cyril Smith, it was Cyril Fletcher – time I shoved me teef back in, I think…..)

Its actually quite sad. These people are being brainwashed into thinking that if they die for the cause, they will end up Martyrs.

Meanwhile, back at al-Qaeda Training HQ …

“Now! Listen up, Suicide Class!
You DON’T shove the bombs up yer *rse!
When we give you a mission
To store amnunition,
We don’t mean THAT Khyber Pass!”

now pay attention lads, i’m only going to show you this once…

“Oh-ho-ho! Ring(resists temptation to add word ‘piece’ here)! Ring! Why don’t you give me a call?…”

Now that’s what I call a fart.

Now what is it I’m supposed to do? Blow off or blow up?

“Now what would a good Muslim boy do with a pig, Jabba?”

Is this a family blog?

And when the joke wears thin,

And the humours dire,

Pentaerythritol tetranitrate,
as a laxative, beats sodium phosphate.
By extremist poltroons
it is prized above prunes
as it seriously bolsters their shite-rate.

What a tonic! Haven’t laughed so much in ages. I love this poem

There was a young man named Abdullah,
Who at the behest of a mullah
Ingested a bomb
With islamic aplomb
And rated it better than senna.

Nice one Joco! If we all keep this up we’ll soon have enough guff to publish a slim volume of raccoon poetry which we can tout around the literary salons and festivals to great acclaim. We might even get an Arts Council grant.

By the way, did anyone else hear Carol Ann Duffy this morning on Radio 4’s Today programme? – the poem about Atlas carrying the planet’s weight down to the last ounce of a humming bird and stuff like that? When she got the laureate’s job I was a bit glum but I think she has already booted Andrew Motion in the poetic spuds and is shaping up to be another Ted Hughes. Good on her!

I heard it – good, wasn’t it?
This year Carol Ann Duffy, next year Bloke with Abdullah Nadgers…