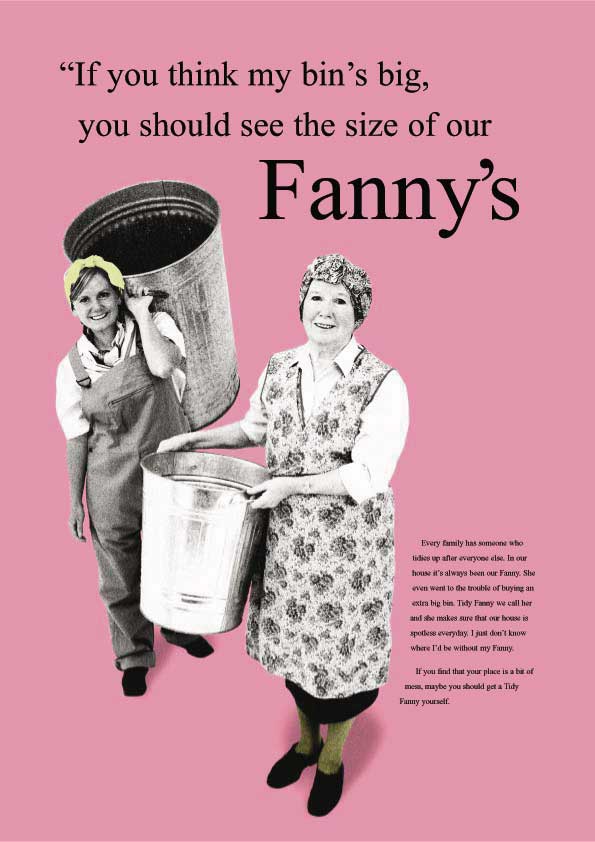 One might think that a Keep Britain Tidy poster campaign designed to grab the attention of litter-louts throughout the land would be welcomed by Home County matrons and City high-fliers alike. One would, however, be wrong.  Instead, tweedy bosoms are heaving in outrage and demands are being made that the posters themselves should be binned because they contain what is being described as ‘filthy’ sexual innuendo.

According to The Plain English Campaign the posters are ‘offensive and inappropriate’, featuring as they do pictures of naked pensioners gardening (“I’ve had more time to trim my bush since he stopped dropping rubbish”) and a couple of  Mrs Mopps wielding dustbins (“If you think my bin’s big, you should see the size of our Fanny’s”).

Other posters in the Keep Britain Tidy campaign are apparently even more ‘filthy’ and are suitable for viewing only by mucky-minded litter-louts of 18 years of age or older; one is rumoured to show a kneeling woman holding an (empty?) beer can under the caption: “While you’re down there”. ……..

Founder of The Plain English Campaign, Chrissie Maher (quite possibly heaving her own bosom in an outraged manner) offered this priggish rubbish by way of an explanation: “As a woman, a grandmother and a tax-payer I am offended, disappointed and disgusted to find that such a worthy cause considers this language suitable for public information.”

The Playun Inglish Kampayn is advising the Keep Britain Tidy team to “take their own advice and bin the filth.”

Well, they would say that, wouldn’t they?

Flattery gets you nowhere.

Visiting my youth, a bit of recycling.

Hope you took sandwiches with you – you can’t beat a Bike ‘n’ Butty!

At this point I would like to thank the paramedics for their excellent administration of oxygen!

Actually, I’ve just taken a zoomed in look at the rest of the wording on the poster – someone was ‘aving a larf when they thought this up:

“Every family has someone who tidies up after everyone else. In our house it’s always been our Fanny. She even went to the trouble of buying an extra big bin. Tidy Fanny we call her and she makes sure that our house is spotless everyday. I just don’t know where I’d be without my Fanny.

If you find that your place is a bit of a mess, maybe you should get a Tidy Fanny yourself.”

“Sling your leftover haddock into your Tidy Craddock”?

Do you really think I am going to fall for that one, hook, line and sinker?

I suppose it was a bit sloppy.

Fanny always had her Johnny handy. Just in case something came to the boil and he could prevent any accidents.

I’m expecting a post from Talbot Rothwell any time now.

In the meantime I expect we’ll carry on wasting bandwidth..

I don’t understand any of this, but I’m sure that if I did I would be deeply shocked and offended. This is a very serious matter. We should not be laughing about this. What is our country coming to? When I was a lad we didn’t waste money on innuendo like this, oh, no, we had the Beano.

And Captain Pugwash, plus various characters!

I know one shouldn’t but you just gotta larf. Titter ye not…but I just can’t help myself!

You’re right Adam Collyer. We shouldn’t muck about with a serious topic with all this smutty rubbish. I think I just threw litterally anything I could think of into the mix and now it’s a right old mess. I’m wheelie sorry and I’ll certainly try to clean up my act. I can’t vouch for Saul though..

The aspect of this I find disturbing is the behaviour of the folks at the Plain English Campaign. They make money from giving their seal of approval for the use of English. Now they feel increasingly qualified to comment on the content.

I don’t want to be censored by those self appointed brigs. I wish therefore the MSM would cease approaching them for comment.