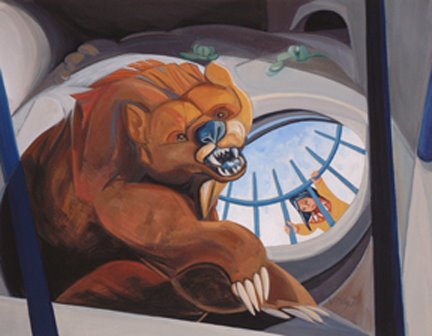 The twin specialities of the Righteous, the ‘emotive’ platform, and ‘oppressive’ legislation, will reach a crescendo today as Mrs Ball’s lays down her bear trap.Â ‘Do as we tell you, not as we do’ .

10 years after Tony Blair delighted his rapturous supporters with his grandiose claims to end inequality, end the class war, end poverty in Africa, end child poverty, Mrs Balls, with the merest hint of a whisper of an admission that a Labour government – which inherited a position of strength – increased by moving the goalposts to introduce a less challenging definition of that moving target ‘child poverty’, has signally failed to achieve its own reduced targets, but is about to commit future governments to meeting those same targets……..with the sword of Damocles, by way of judicial review, hanging over their heads.

The only route out of this predicament open to future – and hopefully Non-Labour – governments will be to return to parliament and loudly state their heretical desire ofÂ not wishing to end ‘child poverty’ to the braying opprobrium of the opposition benches!

Cooper said that if a future government felt it was unable to meet the targets, it would have to repeal the legislation and not simply say it did not have the resources to meet its goals.

The proposed bill, to be discussed in cabinet tomorrow, will establish four separate targets in primary legislation, Cooper, the new work and pensions secretary, said. “I am absolutely clear that this is about reducing inequality, and being bold about what a future Labour government’s vision represents. It is not simply about reducing poverty. It will embed a desire to reduce inequality in our society in legislation.”

It is a classic bear trap.

‘Child poverty’ is one of those emotive phrases like ‘child abuse’, which encompass all gradients of evil, but which automatically conjure images of the most sinister possible versions of the definition.

In the UK, ‘child poverty’ amounts to being a member of a household that receives less than 60% of the median income. If your parents elect to live a life of self sufficiency on an idyllic small holding in the Outer Hebrides, with pollution free air to breathe, an abundance of organic food to ingest, and a crime free environment in which to thrive, but generate no income….then tough, but you just became a ‘child poverty’ case; it also means that if the country prospers, and independent entrepreneurs are able to drive up their rewards for their enterprise, then plop! as if by magic, several thousand more children will be cast into the Dickensian sounding ‘poverty’.

Government funded Quangos, from their position on the moral high ground, will then be free to attack the incumbent government as heartless capitalists, for failing to achieve the very equality that Labour failed to do.

This Bill is not about caring for children, it is about providing a stick for a disintergrating Government to periodically place a new Goverment on the ‘naughty step’.

I can only repeat. It’s not about how much money you have, it’s about how you spend it. Britain doesn’t know the first thing about real poverty.

The Child Poverty I worry about is a poverty of the soul where children are left to maraud around the streets uncontrolled while their parents snort Cocaine and get drunk. And The Police can’t do anything about it because these are just children. Although why they can’t do anything about The Parents is a mysteryto me. I thought snortin Cocaine and getting perpetually drunk, were crimes. Especially around children. But I don’t suppose that there are any votes in that one, and certainly not for NuLabour.

Britain is no longer fit to live in. I despair. My once lovely country has gone to the dogs of Pit Bull variety.