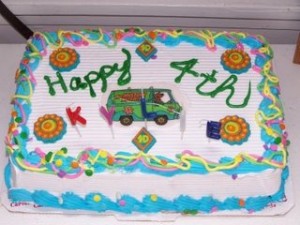 A standard question posed by many adults to a small child. Easily within a four year old childâs capacity to answer in words of one syllable.

What a minefield that question will present for young Sean and Amelie McCann.

How to answer? One, but I did have two? Two, but one is missing? There are three of us, but our parents lost one? These are complicated answers, confusing to both the twins and the adult enquirer.

Will special instructions be given to all the teachers at their school, when they are old enough to attend next year. âDo not refer to other siblings in classâ.

What to make of the article in yesterdayâs Sun saying that Madeleine has âleft a Birthday present for themâ â how are they to digest that information.?  Did Madeleine arrive in the night like some fairy princess version of Father Christmas and leave the present? Why didnât they see her?  Worse, following the news last year from now-deceased expert Ray Wye, who told us that the twins were being encouraged to play âhunt the monster who took Madeleineâ   â was the scary monster with herâ? We are told that âSometimes Sean and Amelie make phone calls to her on their toy phones, then go off to find her.â Four months after her disappearance, the brother and sister of Madeleine McCann were still insisting on leaving a plate of food out for her. Little doubt then, that Sean and Amelie are painfully aware of both the existence and disappearance of their old sister.

Twin experts tell us that twins share a deeper less conditional relationship than mere siblings, but as a result of this, also suffer more anxiety that they may lose their twin than do mere siblings. How much deeper must that anxiety be when they have witnessed the loss of a sibling.

One night Sean and Madeleine cried out in unison â the next she was gone. Does Sean still cry? Does Amelie risk crying with him?

As the twins grow older, will they wonder why every stage in their development provided yet another excuse for a press release, including helpful quotes from âfriendsâ close to the family who  know all the details of presents and cakes. Do you suppose they will buy themselves a copy of The Sun on the day before their 18th birthday in order to find out what treats lie in store for them?

We will all be thinking of them today, and wishing them as easy a passage toward adulthood as is possible under the circumstances. Poor little mites.

Nature versus Nurture, the age old debate, is the bosom of your family the safest place to be?

They fuck you up, your mum and dad.

They may not mean to but they do.

They fill you with the faults they had,

And add some extra, just for you.

But they were fucked up in their turn,

By fools in old-style hats and coats,

Who half the time were soppy-stern,

And half at one anotherâs throats.

Man hands on misery to man.

Get out as early as you can,

And donât have any kids yourself.

As much as I like Saul â I really do â I have to draw a line at
âshootingâ.
Gloria, your use of âcomestiblesâ was perfectly correct and
harmless; it surely doesnât warrant such act of aggression, as we have seen
here today.
So, just call out my name [Ch

Well â¦â¦â¦â¦ I am shocked at the fact that we are even told that this is what
they have told the twins!

No matter what the Clan say â¦â¦â¦â¦â¦â¦ The twins would have forgotten very
quickly that they even had a sister called Madeleine. They were too young to
store these kind of memories. Thye had exciting things to do â¦â¦â¦â¦ like learn
to walk upright and meet new people, taste new foods and engage in all manner
of activities.

There are some â¦â¦â¦â¦.. extremely rare people that can remember being in a
pram or cot or have some distant memory or a feeling of trauma that they
cannot recall â¦â¦â¦â¦ and I am one of them â¦â¦â¦â¦.

To say that the twins were insisting on plates of food being left out for
her is absolute rubbish â¦â¦â¦â¦.. unless the psychologist or family members were
deliberately instilling these kinds of memories and mentioning M.

I had a Spirit friend from around the time of being 18 months old and I can
remember having absolute murders with my Parents because they kept insisting
on it just being an imaginary play-mate. They would not believe he was
real.

My Mum had been brought up in the Catholic faith so you can imagine the
trouble it caused in front of my Grandparents!!!

My Mother was never allowed to put her handbag in the pram in case it fell
on J****âs head or his legs and I can vividly recall those screaming
episodes!

But this is rare. And it was so very rare and untalked about in the 60s â
Just too embarrassing for my Parents to deal with so â¦â¦â¦. it was considered
best that I would have to be seen by a psychiatrist. There was not only the
stigma of going against the familyâs religion â¦â¦â¦â¦ The stigma of having such a
young child visiting a psychiatrist was likened to be me being the Devilâs own
child!

The shrinkâs medical notes are still in my medical file.

He concluded that I appeared to respond to an individual of a certain
height that did not change and that I had convinced him that there was some
entity around me that would need further investigation â¦â¦. etc. etc. etc.
Apparently I was observed to have odd conversations that a child of my age
would be unable to conduct without prompting by an adult.

I read words on that page that I had never seen or even heard.

It is almost as if the twins are being instilled with false memories.

They may even go on in later years to create false memories in all areas of
their life â¦â¦â¦â¦â¦ Their developing brains may even use this as coping
mechanisms in the future. But â¦â¦â¦.. fuck me! They are going to need some
methods of coping!!!

Would it not be best to just to come clean now and tell the twins how much
they loved their children but they did not realise how precious they were
â¦â¦â¦â¦â¦.. so they fucked off out every night and their eldest disappeared â¦â¦â¦â¦â¦.
and they are really sorry â¦â¦â¦â¦ And just take the blame.

Christ! If I parked my car in a seedy area and it went missing, my Hubby
would blame me for leaving it up a side street. He recently went mental at a
friend of mine who had left her car in a seemingly quiet area.

And that was just a car â¦â¦â¦.

Would the Clan leave an expensive car at a beauty spot in Scotland for a
few hours.

Mrs. Smud, I was planning to benefit from a relatively quiet Sunday
afternoon to do some âpre-cookingâ for tomorrow, but your Beaver Cheese
effectively finished off my culinary inspiration

Can you just wait till Iâve finished my Marmite and Venezuelan Beaver
Cheese toastie? Thereâs a chum â¦

Well, Iâm sorry, but Iâm going to have to shoot you.

Well I donât want it after itâs been googled, thank you very much. Hrrmph.
Damn and Ballast. And Iâd brought a pork pie, too.

This is a difficult one. How do you explain to small children what is going
on? I suppose this is the best way until they are old enough to hear the
truth. Who knows, maybe it will come out someday.
We can consider this on
our little trip.

Okay Glo, hoist the Spinnaker, cast off the Bow Spring, donât forget the
Stern line and watch out for rotating jibs.

Is this the non alcoholic thread?

I
was reading the entry .The twins are severly f**** up by now.I remember
clarrie saying they had âspecial monitoringââ¦god knows what that means.Are
their futur teachers going to have the same âtreatementâ as well?
This is a
very cruel situation,indeed,when we know that somebody,one day,will question
them or challenge them as kids doâ¦.
I mean its not everyday one receives
presents from the other worldâ¦
It is an other spinâ¦it is the same stuff
over and over again with less strenght though,a sure sign their fall is coming
up.
Why do you think gerry went to portugal recently?and kate is goig to
follow.To pay an UNofficial visit to Official people? jejeâ¦

janes said: However, I would explain that that is what **** would have
wanted to give them if she were here. Are we sure this is not what the McCanns
have done?
â¦â¦â¦â¦..

My thoughts exactly â in all likelihood this is exactly how the presents
from M are explained.

A friend who had one son, the same age as mine, was a short term fosterer.
Children came and went all the time. When our sons were six years old hers,
Anthony, was invited to come to Cornwall with us for a short (June) holiday
before we moved permanently. Both boys were really looking forward to
it.
The evening before we were due to leave Anthony was looking a little
sad and his mother asked what the problem was.
He explained that he would
have quite liked to see what it was like in Mrs Câs class next term.
His
mother was confused at first but then realised that Anthony, having spent his
whole six years watching children come and go, thought it was his turn to
go.
She was shocked, not so much at his mistaken belief that his number was
up, but at his quiet acceptance of his imminent departure.
Children need to
know the truth, tempered with caution depending on their age and their ability
to comprehend and coupled with sensitivity.
Having never had a child
disappear I find it hard to imagine how I would explain its loss to a sibling
â If the child was stolen rather than dead and I wanted to keep its memory
alive for my other children I suspect I too would produce presents from the
missing child. However, I would explain that that is what **** would have
wanted to give them if she were here. Are we sure this is not what the McCanns
have done?

Well, I was hoping for a new set of gnashers but if thatâs not on the
cards, just an expertly mixed glass of Steradent for me please.

I was wondering â would a fancy-dress boat trip be a good idea? I could
whip off my kagool and bob about in a scallop shell wearing a crinkly wig,
appearing to rise from the spume as The Girth of Venus. Whaddyou think?

Indeed, non-alcoholic for Jo, and your usual slug for you?

Is this the thread where I can get a new peratif, Anna?

Letâs hope the biggest thing the twins have learned over the past 20 months
is that each time they cry, Mummy or Daddy WILL come to comfort and love them,
that Mummy and Daddy ARE there to keep them safe day and night, that they are
NEVER left alone and vulnerable to monstrous predatory abductors.

What do you think Madeleine has left for the twinsâ birthday this year?
Guess Who?, a nice little plastic till and Mr Potato Head (just the head, no
facial features included)?.

Yes, It worries me that children learn through cause and effectâ¦.usually
that crying brings âMumâ and food. The lesson that Sean must have learnt
through crying chills me to the bone too.

Just caught this before turning in to the silken sheets [in the
basket].
I told Maman tonight about the Madeleineâs presents for the
twinsâ¦
I cannot describe her face nor the sounds she was making
spontaneously.
But imagine something between vomiting and howlingâ¦