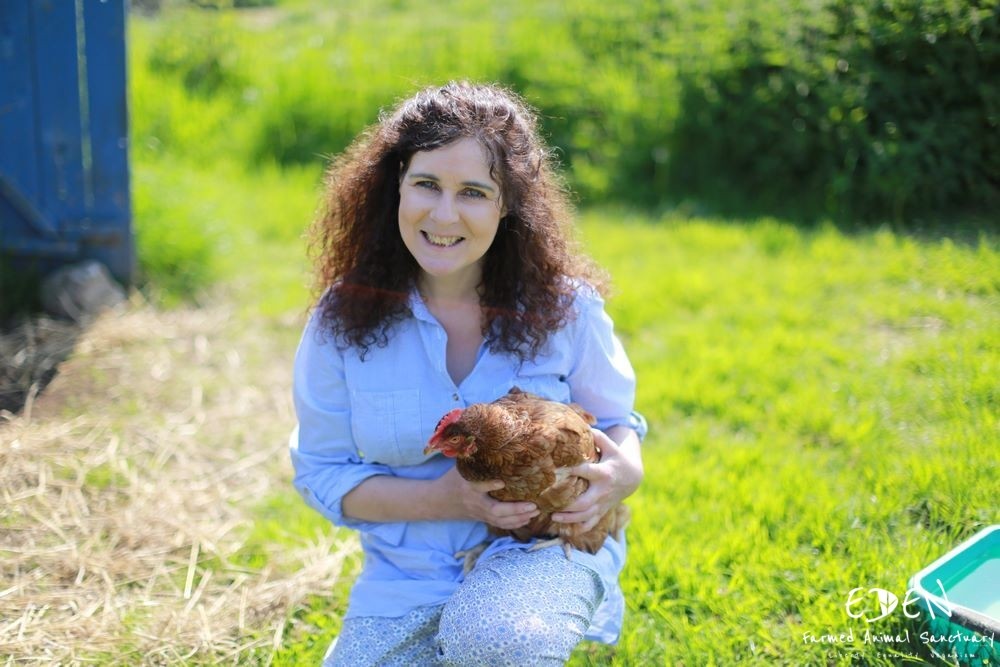 Sandra with Claudia – another trafficked hen. No, I don’t know what she does with the eggs either – they pop out what ever she thinks. Perhaps she boils them humanely.

There is a carnival atmosphere up in Lancashire. The drums are beating, that distinctive sound of the new age traveller that we hear at the G7 conference, the ‘go green’ meetings, the ‘call to arms’ of the vegan social justice warrior. Fracking is about to start. The Police have a half million pound a month budget to keep order. You may think there is a whiff of anarchy amongst these demos – but no, they have a leader, a Sebastian Keeley, who want to ‘reclaim the power’ from the elite and hand it to the, er, non, elite, which presumably makes them the new elite, does it not? Perhaps they get Yurts instead of second hand tents and prime locations to erect thier tents……

The Mister Whippy ice-cream van is already in position, no sign of a burger van – too many vegans I suppose. The beleaguered boss of the Fracking company was pointing out in vain that his was the most highly regulated fracking site in the world; he was being measured for air quality, water quality, and traffic disturbance – the environmental agency had already done 6 inspections and he hadn’t even started work yet!!!

I often feel like writing these days, but then the pain returns, or the nurses have some procedure they need to perform, or the Doctor is calling in – life is never as quiet and organised as it used to be when I jumped out of bed and sat down in front of my computer and started another post…..but today that music exercised me and I wanted to know more about it. What was it called – Garage Band? If you know the answer please let me know in the comments, it’s driving me nuts.

I’ve been led on a merry dance. Somewhere along the line, I found the original track for Rolf Harris’s Waltzing Matilda. Practically the Australian National Anthem these days. Veering off on a tangent, as I often do, I pondered on it’s fate. Had it been vanquished from sight in the same manner that all Jimmy Savile’s Top of the Pops appearances had been? After all, Savile had never been found guilty of heinous crimes, only ‘believed to be so’ – whereas Harris actually had been convicted, however unfairly. Nope, Waltzing Matilda was too much a part of the fabric of Australian life to suffer the same fate it seemed. There is even a museum dedicated to the song! It burnt down a couple of years ago. Now I was firmly on the track of Matilda – my mind works like this, in case you haven’t noticed.

The tune to Waltzing Matilda is actually Scottish – “Thou Bonnie Wood of Craigielea”- if you really want to disappear down a rabbit hole try googling that marching song….Ms Raccoon did, and didn’t emerge for an hour or so – the things I do for you! So almost back on track with Matilda, and what is this I find? If its not Matilda Higgins….

Sandra Higgins emerged 2008 in Ireland. Sandra is a psychologist who founded the first Vegan animal sanctuary in Ireland, the world possibly, where animals who had been ‘trafficked’ and enslaved for human use were saved (stick wth me, please). Amongst these modern day slaves torn from their mother’s breasts crying piteously, so that we humans could consume thier livers and slice up their thighs without so much as a thought, was a hen called Matilda. Eventually Matilda came to the end of her natural life – I shall let Sandra take over at this point:

The night she was dying I promised her I would dedicate the rest of my life to vegan education. In her memory I opened Matilda’s Promise, Animal Rights & Vegan Education Centre. Go Vegan World is one of the activities of that centre.

Never again would humans wait at a hen’s rear end for their ovary to produce another egg, a potential son or daughter, carelessly tossed into boiling water for a few minutes, ready to be consumed by an eager monster of a human youngster,

It must have been a moving evening, comforting young Mathilda as she lay gasping for breath, I have tears in my eyes as I think of it. Perhaps I should open the first Palliative Care Centre for Hens?

Anyway, moving smartly along, Matilda’s ideas have gathered so much financial support that she has enough money to buy full page adverts in many of the main stream media’s dying organs. They, of course, are so short of money these days that they don’t care where the money comes from.

So today I had a visitor carrying a full page from the Daily Telegraph.

‘You are going to love this’ he said.

He was right. It seems that Sandra is now campaigning to have us stop drinking milk. ‘Humane Milk is a Myth’. Calves are torn from their Mother’s who are still bloody from birth (watch the terminology) and are searching frantically for their daughter’s. They tremble piteously and drink milk from rubber teats on the wall instead of their Mother’s nurturing bodies. All because human’s take their milk! Their son’s are slaughtered for their flesh, and they themselves are slaughtered at 6 years old – their natural lifespan is 25 years.

Now we may not agree with gummint, and think they should be replaced with dreadlocked morons like young Sebastian but surely before they go they could pass a law for us saying that it was illegal to traffick baby calves and stop people having milk in their tea?

Think of Matilda. Her feathers gradually fading in colour – do they have Hen Ketamine?

Tilly is short for Matilda. In case you didn’t know.

Just thought you’d like to know where my mind had been today, wandering along all sorts of paths – don’t think I’ve actually lost the plot yet, but my ability to write a serious post is still in doubt. So it’s either nothing, or put up with my meandering.

We have so much to worry about in the modern world.