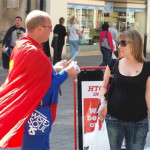 ‘Give a Smile UK’ describes itself as a ‘social enterprise’. In practice that means they take local people who have been ‘affected by the recession’ and unable to find full or even part-time employment and train them in communication skills, sales techniques, and send them out onto the local high street to persuade local people to part with their cash in order to provide other local people with a free holiday. 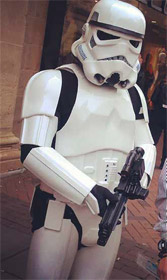 They dress them as Robocop, a mono chrome Batman or even a multi-coloured Batman. Judging by their web site, with dozens of grateful families thanking them for their holiday – they are highly successful. Whether they are paid or not is unclear.

What is clear is that they don’t like competition from ‘amateurs’, especially not amateurs using physical force.

There was chugger Antonio Cortes dressed in his full multi-coloured Batman outfit, having his 2,99p breakfast in Weatherspoons (where else, dressed like that?) when a woman’s screams were heard coming from the direction of the local cash point.

“I went up to give him his large English breakfast and he had gone.
“He just flew through the fire exit. It was quite a surprise.”

Antonio, 32, who is fundraising as Superman for the Give a Smile social enterprise for struggling families, said:

“I heard screaming and saw a woman in distress.

Antonio said the villain looked like a ‘desperate guy’ who had been drinking all morning, and was ‘walking away really fast’.

The ‘villain’ – aged 54, drunk, and walking ‘really fast’ was arrested by police after Antonio sat on him.

“I feel like a real life superhero, but I just did what anyone else would have done.

“It feels good knowing that I have saved someone. It’s scary to think that in broad daylight, someone can do that.

“It is nice to know that that man is no longer on the streets.”

Such excitement in Weatherspoons at 11am!

It must be the ‘Lottery effect’ – everyone thinks they can be a chugger these days.

Hey! Let’s be careful out there.

This is all very confusing because Give a Smile are a social enterprise registered as a limited company and not as a charity. Their business is door to door sales it seems. Director James Hannon is a surveyor described on one company check site as a ‘pedlar’. So in what capacity are they authorised to to solicit donations?

Good question Margaret! Maybe they will regret the publicity?
I did note the ‘Antonio’ was ex Canaries – land of time-share salesmen?

I’ve only met one while I’ve been here, and he was reduced to working the door at a Mexican restaurant, handing out the sombreros to the kids…
We had a chat, and he bemoaned the end of the good old days when he could bilk a sap in the morning & spend the rest of the day on the beach; he was shameless.

I heard a few horror stories from ex-pats, though…

This is all very confusing because Give a Smile are a social enterprise registered as a limited company and not as a charity.
It does seem odd. Companies House doesn’t seem to have a record for a “Give a Smile” or for the company No 08037364 indicated on the Company Check site. The web domain registrant has an address in Bermuda: http://www.networksolutions.com/whois/results.jsp?domain=giveasmileuk.co.uk

Correction: It is on the Companies House site under that name/number. Silly me!

What a strange business! The testimonials on their site are interesting, the hard-up families who find themselves the lucky recipients of a free mini-break:

Averaging almost one ‘winner’ a week… Hmmm, is there just a single caravan somewhere, with a crafty owner who has found a particularly lucrative way of exploiting his investment, squeezing the maximum amount of cash out of it with the help of costume-clad clowns?!?

(I’m not sure the likes of Disney are going to be too pleased to see their copyrighted-designs pan-handling on the high-street, either. The bloke in the top picture seems to have ‘twisted soul’ emblazoned on his cape, which may reveal something or other.)

Has anyone experienced the hoodie at the door with bag full of crap for sale who announces ‘I’m an ex-young offender going straight’ or words to that effect? Just wondering.

We find that a “NO CANVASSERS, NO SALESMEN, NO COLD CALLERS” sign does wonders.

Some friend has one that was even more specific: “WE DO NOT BUY INSURANCE, DOUBLE GLAZING, OR RELIGION AT THIS DOOR.”

Reminds me of one I remember from my days as a postie: “WE AREN’T INTERESTED IN YOUR PRODUCTS, POLITICS, OR RELIGION, BUT WISH YOU A PLEASANT JOURNEY PAST OUR DOOR”

Director James Hannon is a surveyor described on one company check site as a ‘pedlar’.
Oh-oh… same name, same location and selling tickets for a holiday competition:
http://www.banburyguardian.co.uk/news/local-news/man-had-sex-with-14-year-old-1-590478
https://companycheck.co.uk/director/907828224/MR-JAMES-HANNON/summary

‘Give A Smile’ was previously known as ‘Sharing The Love Ltd.’!

Just had it confirmed that it is the same man – wasn’t jailed for the offence, but had to sign on sex offenders register – don’t know how long that lasts for. Anyone?
Something doesn’t smell right about a man possibly on sex offenders list running a company with employees dressed as children’s heroes.
Very well spotted Cloudberry.

Five years, according to this:
http://www.banburyguardian.co.uk/news/local-news/alley-sex-man-freed-1-589695

I guess we have to say he is entitled to be treated as a reformed criminal – and get on with entertaining kids then.

I think I’d feel more comfortable if he’d chosen another occupation though.

Indeed, although the chosen occupation seems murky enough to warrant further investigation on its own merits!
Although Antonio may well be a “charity worker” as described in the press, he’s not working for a charity when he’s working for this outfit.

Still, no one forces anyone to put their hand in their pocket for such operators. Isn’t their a similar just-this-side-of-legal moneymaking scheme whereby ‘pretend students’ get around the law on street-selling, flogging their pretend rag-mags to unsuspecting punters? Again, fools and their money…

Although the company website has testimonials apparently from families who have won holidays, the Facebook page, which dates from 2013, and has comments from people nominating themselves for a holiday, doesn’t appear to have comments from anyone giving feedback on their holiday. It would be interesting to know how many holidays have actually taken place.

Oh dear, the number one story on the Banbury Guardian’s site is now… the caped crusader’s intervention! Let’s see if they manage to ‘join the dots’…

@Margaret Jervis
Has anyone experienced the hoodie at the door with bag full of crap for sale who announces ‘I’m an ex-young offender going straight’ or words to that effect? Just wondering.
Yes and for some reason I always buy the crap …..there are many things I am not particularly rational about

I bought a couple of things when they first started coming round. The lads are I think being exploited.

But it really is crap, and not cheap. So I ended up shouting at one, and they haven’t appeared since. Maybe I am off the sucker list.

The sad things is that they probably put as much effort into earning what must be a pretty paltry amount of money, as they would doing a proper job.

Problem is, as any employer when faced with two equal candidates, one of whom is an ex-offender, it takes a measure of courage to employ the ‘crook’.
Timpson’s (shoe-repairs, key-cutting etc.) do some excellent work recruiting and employing ex-offenders, with considerable success (and not without risk in a cash-based business) – if others had the courage to do that, maybe fewer of them would end up door-knocking or continuing in crime.

Expect there’s seems to be a lot of doubt whether these door-to-door merchants are really part of some “ex-offenders programme.”

I like your honesty. Frankly, I don’t give a damn about a beggar with a dog on a London street in the height of summer, but come a chilly winter’s day and some scrawny blighter shivering and hungry, then even my hard heart softens.

Says a lot about the world, I think.

A belated welcome back to the landlady, who if anything seems to be on finer form than previously, one hopes her health problems are in abeyance and is enjoying all the comforts of her Mr G built sanctuary from the madness.

Yoiks, the story has gone global!
http://abcnews.go.com/International/british-superman-saves-day/story?id=36592271
(The company is now described as a ‘non-profit’.)

Is that ‘non-profit’ as in Google ?

Well that’s it, I think. Well done team AR. Think we may have stumbled upon one enormous scandal hiding in plain sight.

If Mr Hannon is a sex offender (even an ex one) he should not be in charge of the vulnerable – though he may have escaped DBS barring through being a sole director of a limited company. As for the financials – look at their accounts. Peanuts. So what’s up Smiley?

One is not a client – I can be forgiven!

Whether ’tis weather or wether, a spoon is just a spoon.

Gadzooks and full of foreign chuggers nowadays it seems.

Alleluia! is there no end of happy circumstance? What wonderful tales of derring do and emanating out of that good fortune so liberally spread about, where mass immigration is enforced for the benefit of us all, how lucky are we? So celebrate indeed I will and with a breakfast of bacon, warmed over tinned mushies soggy toast, cold ‘fried’ tomatoes and eggs washed liberally down by a half pint of poorly kept bitter – down at my very own local and cultural melting pot, aka Wotchamacallit’s.