Kalakala was beautiful, she might have been invented with the sole purpose in mind of pleasing a man’s eye.

That she has ended her life tired, careworn, exhausted, and scarred is entirely the fault of misuse at the hands of men. Men who boasted of their association with her in her prime, abused her, and then discarded her when she was no longer able to service their needs.

Now she is to be stripped of the finery with which they once adorned her, and left to meet her end in ignominy.

She had a proud ancestry. Distinguished members of the Peabody family; noted philanthropists, who founded Yale and Harvard universities, established a foundation to aid the poor world wide. It was Alexander Peabody who was responsible for Kalakala’s arrival in our world on June 3rd, 1935. She would have been 79 this year. No great age for such a fine lady.

From 1935 to 1967, Kalakala worked the shores of the Puget Sound giving working men a fine send off to the day; by night, they danced, they drank, they sang in her company. In return they gave her a meagre few coppers.

She had had a previous life – she was born as ‘Peralta’ seven years earlier, but an unfortunate incident in San Franciso’s Bay area saw her catch fire. Alexander Peabody rescued her. He paid to rebuild her fine body and fashionable appearance and helped ease her into her new career as ‘Kalakala’ – the pride of Seattle.

In 1998, a Seattle artist harboured romantic notions of saving her and brought her back to Seattle, setting her up in a prominent position, and encouraging admirers to give her money. Insufficient money, sadly, and once more she was run out of town.

Capt. S. J Ferguson of the Coast Guard wrote, “For seven years, Mr. Rodrigues has not been able to raise sufficient money or employ the resources necessary to even minimally maintain the vessel, and instead has allowed the M/V Kalakala to rapidly deteriorate.”

The moorage site, Ferguson wrote, “is regularly frequented by trespassers, metal thieves and homeless persons.” At low tide, the boat regularly went aground. The condition of the ship’s steel “is highly wasted, brittle and corroded.”

All of which led Ferguson to conclude “that a flooding and sinking incident is imminent.” 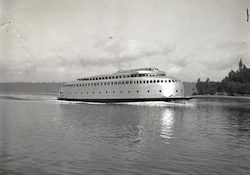 Her present owner, Karl Anderson, plans to allow this grand old lady to float free on the high tide of January 22nd, and die a dignified death at sea.

“I see a sad remnant of a lady way past her prime and ready to die,” he said.

She was a magnificent figure in her prime. Even though a lot of her trouble stemmed from the fact that it was near impossible for the Captain to see where she was going from the wheelhouse…. 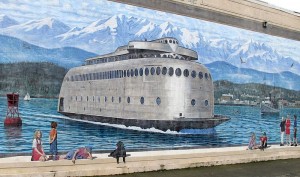 She will remain immortalised in the mural at Port Angeles. Just beautiful.

What a beautiful ship! And what a sad and undignified end. Surely, if the ‘Spruce Goose’ can be saved and restored for popsterity, this could?

The design reminds me of those chrome spaceships on the old ‘Flash Gordon’ serials, whereas the post itself makes me feel like I’m on board. A lovely evocative piece.

The dedication to ships and railways and locomotives etc never ceases to amaze me. Here’s a local example from my hometown:

If only we were so committed to architecture.

To be fair, we are pretty comitted to architecture. There are any number of ‘preserved’ buildings, a listing system to prevent inappropriate changes to other buildings, conservation zones in which repainting your front door can bring a small army of clip-board wielding heritage nazis down on you, the National Trust and English Heritage….

But then you get classics disappear, like cinemas, dancehalls, nightclubs and greasy spoons all turned into “luxury apartment developments” because they are not the heritage of which “we” should be proud… and as for conservation zones – fatuous. I have a friend who lives in one – in Gillignham of all places – and you have to ask yourself, what is it, exactly, that is worth preserving here? Or is it just another financial racket?

I worked in a converted cinema many moons ago. The inside had been gutted for it’s new use but the front looked pretty much still as it always had. When I worked there in the mid-80’s it had been so converted for about twenty years. One day I was standing idly by the front door and a guy started up the steps and asked me what time the films started. He said he hadn’t been to “the pictures” for a while…

Telling you the story now, you will probably assume he was teasing me and I didn’t get the joke, but I can tell you he was well into his fifties and was being perfectly serious. Dust to dust.

‘Can’t save everything’ I suppose.

I see where you’re coming from on conservation zones, but as a half-way house between leaving it all to chance and ending up with slow degradation, and turning the place into a museum, I suppose it has some merit. Like any government diktat, the theory is bound to be easier than the practice, though.

Too reminiscent of the over-sized cruise liners that are prone to capsize and kill people if you try to show off to your shore-based girlfriend from the bridge.

That’s rather beautiful and rather sad. Interesting (?) philosophical/metaphysical quetion: can a ship, a care or other machine or computer say, have a “soul”? Certainly some have an ambiance, and I have been quite devoted to a number of old bangers (!) in the past, and felt it was in some way reciprocated!

“Even though a lot of her trouble stemmed from the fact that it was near impossible for the Captain to see where she was going from the wheelhouse….”

There is a current analogy in there somewhere. *ponders*

Personally I think the ship is hideous, an eye sore -an Airstream trailer meets a crude oil tanker built to the plans for the ark in Genesis but I never saw the appeal in Art Deco myself, Art Deco’s sole purpose being to uglify everything that Art Nouveau had made beautiful.

Ironing out the wrinkles perhaps…
It was largely prompted by concrete and steel I suppose. Now they have glass too.

It’s interesting that she’s not even worth scrapping. Commodity prices too low, I suppose.

I’m quite staggered that Bill’n’Melinda haven’t sponsored the restoration and re-homing, seeing as it’s Seattle and all that. Maybe technology isn’t really his thing.

all those *rusting windows* probably put him off…

Sadly salt water and time are not kind to ships, and in the end there is no great nostalgia for car ferries. Rather a pity when one considers some of the abominations worthy of funding in Seattle.

It was interesting to find that a Boeing engineer was responsible for the concept.

Oh, I like that; she’s so ugly she’s beautiful.
I wish I could rescue her and make her into a home, but she wouldn’t fit into my garden

Oh look!!
http://www.seattlepi.com/local/article/Disillusioned-Makah-suing-Kalakala-owner-1148518.php
Lawyers! Why am I not surprised…

I NEVER cease to be amazed at the breadth and depth of our ladlady’s knowledge and, seemingly, all seeing eye… A lovely story in its way, but surely something as unique and beautiful as this needs to be preserved, not sunk??