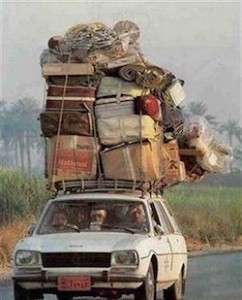 You got up far too late today to catch sight of the Raccoon – she was up and away, on her travels again, before you even put the kettle on…

Once the good Doctors of Bordeaux had finished rebuilding me, and I am now duly undersealed, bored out, valves reseated, and have passed my MOT – we decided to embark on a new phase of our life.

Last year, just three weeks before the blasted cancer came back, we bought a wreck of a house in England, partly as an investment and partly as a project to keep Mr G busy. We haven’t been able to touch it since, so it has sat getting damp and disorderly in forlorn grandeur while all the attention was on the restoration of Ms Raccoon. We also have an broom cupboard in France that we let out, but will be taking possession of again shortly.

‘For God’s sake, we don’t need all this’ the cry would go up regularly, as we (that’s the royal ‘we’ of course) battled with planning applications, rental agreements, tax returns in two countries, and daily trips to Bordeaux. And the blog, too. To say nothing of Ms Raccoon’s regular whining that she just wanted to be free to go to Morocco again or maybe that nice Portuguese beach with the German adonis in situ…then there was Poland, and Bulgaria, and, and…

So, a couple of months ago, we put the Mill on the market, and after a hiccup with a total tosser, (English, naturally) it is now sold to a couple that we are very happy about. Connoisseurs of past posts such as ‘The Man Cave’ will be relieved to see that I did get a kitchen eventually.

Consequently, we must spend the next two months moving all our worldly possessions in two entirely different directions. We started this morning with Mr Gs workshop heading for the Chanel Tunnel on a huge trailer behind our camper van. Having dealt with the important stuff, I think minor details like my toothbrush and my knickers should head in the opposite direction the following week.

I can guarantee that whatever I need over the next few months will permanently be ‘in the other place’. The little Fiat that I bought in England a few weeks ago, already is, and now has to gamely battle its way back again, complete with dog, computer, bank statements and all the other things I wouldn’t dream of leaving in Mr Gs care and control. I have to get water, electric, broadband, telephone connected in both places and chase up the builder who should have taken a wall out six months ago – as he has now got wind of our imminent arrival, he has decided to start today; Ms Raccoon will be sleeping on a mattress on the floor with no water and no electric for four days – we can now add ‘surrounded by swirling brick dust’.

D’you know what? I can’t wait! The worst part of being ill is that everyone cossets and cares for you constantly – it is lovely of them, but it gets on your nerves eventually; you just want to be the person you used to be. Our new adventure started this morning – there will be none of the ‘shall I stop for a bit, I don’t want to tire you out’ – we will be going hell for leather to catch our booked slot. If I ask to stop to use the loo, eyeballs will roll and I’ll be told to be quick, just like the old days. Wonderful.

A week later, Mr G will return with another load and collect me – meanwhile I shall have had a peaceful time giving the builders Hell – and catching wi-fi in the local pub on my iPad. I shan’t be trying to write tapping out with that stupid dib, dib, dib thingy on the virtual keyboard.

Anybody know whether you can use a wireless keyboard and mouse with an iPad? Maybe I should buy a Macbook Air instead? I intend to take off for Poland as soon as everything is safely stashed – suggestions for mobile Raccoontage welcome.

So I’ve put up some of the most popular archive posts that are missing from the site (thanks for the memory stick Gildas) to keep you amused in my absence – and see you back here in a couple of weeks.

200 rooms and only two bathrooms at the mill?! Lord what a wait when fully occupied!

Great to see you are back to your old self! With regards to the iPad, mouse and keyboard, I bought an adapter from Groupon that plugs into the iPad slot, and takes USB, memory cards and also three leads that fit into your telly if you want to view anything on the big screen. I’ll dig around and see if I can find the product and post the link up here.

The Chanel Tunnel? Should be easy enough to negotiate. Just follow your nose.

I share your dislike of dib, dib thingys, and am contemplating the purchase of a Bluetooth keyboard for my iPad. Apple sell them – their own and also Logitech. There’s also another firm called Brydge, but their website seems to have disappeared (for me, anyway).

I have used this sort of thing:-

Oh that’s a good idea! I didn’t think of that! I do know that the adapter I have works with a wireless Logitech keyboard.

Moving is hell! Done it twice, hated it and I did it all in- country.

But the question on everyones’ lips; will Mr G get his shed back at the end of it all?

When I read your comment I was tempted to reply that, from what I know of Mr G, his ‘man-space-shed-allocation’ would be likely to be greater than the living accommodation afforded to Mr & Mrs G combined.

I have just spoken with a high-spirited Ms Raccoon and, among other things, checked with her that my instinct about Mr G’s essential square-footage was on-target and she has confirmed it is so.

Make sure you search under your vehicle before crossing the Channel !

A very moving post – good luck with everything everywhere, which it probably will be.

That is a marvelous kitchen, is that a butter churner under the middle table? Its a pity the photos didn’t include the man cave! Good luck with the move.

I have a logitech keyboard for my iPad Air – works fine, but I still use the case I already had, just plug the iPad into the keyboard when needed.

I also have an app called Hanx writer which makes typewriter noises – reminds me of my typing lessons in 1952!!!

Hi Anna. Yes, you can get a keyboard for an iPad – Logitech make one that the edge of the iPad just sits in and turns the iPad into something that resembles a small MacBook. It matches beautifully and looks very smart. It communicates via Bluetooth I think. Something like that, anyway. A friend of mine has one and I was quite impressed by it – which is rare for me! Works very well.

£43 at Amazon : http://www.amazon.co.uk/Logitech-Ultrathin-Keyboard-Cover-Generation/dp/B00835UQK8
Comes in Silver or Black.

If you’re in England and anywhere near East Anglia, would love to meet you…

Best of luck with the builders. They’re (mainly) all sh*ts…

Did just the same ourselves on Saturday, quit a trek but strangely fun. Good luck with it all.

Good luck with the moves Anna

You have had plenty of advice in the keyboard area – but FWIW – I just use the same keyboard as I have with the iMac – Bluetooth thingy….

I’ve had to move a couple of times and simply hire Australians to do it all for me (I have no idea why they are always Australians – something to do with the colonies I assume). Very good, honest, fast, efficient.

Hiya – if it’s in Yorkshire, i’m good for lugging stuff and standing around pointing saying ‘yeah, needs a bit of work does that’ whilst chain smoking fags.

Welcome back Anna , don’t envy you the move I hate moving ! Maybe once you are settled you can have a house warming party it would be great to meet everyone in person. Don’t know where you will be but I am sure we could find a place we could all get to. Get scan results on Friday so fingers x.
Carol

Good Fortune with your moves. If you are moving near East Sussex/Kent borders and Mr G hasn’t got a chum on hand and needs one for whatever reason send me an e mail.

Good luck with the weather, the builders, the journeys Anna. Sounds like you have been very busy keeping a toe in England and France. All the best for your next lot of projects and plans for living in your refurbished cottage.

Sad you’ve moved from France (mostly), Anna. It sounded pretty idylic , in a bucolic sort of a way. My impression from a safe distance, is that life is pretty wretched in even the nice bits of the UK now.
I’m sure you’ll make the best of it though !

I think it would be kind of Anna to at least give a general hint as to which bit of this rapidly decaying septic isle she intends to grace.

No general hint is required Ancient and Tattered, Anna has previously revealed the county where the cottage is located. Locate the archived posts at the top of the page, open “Ms Raccoon returns” and all will be revealed (I will not spoil your fun, the post is well worth re-reading).

I add my good wishes to the landlady and Mr G’s odyssey, they are obviously in adventure mode “We started this morning with Mr Gs workshop heading for the Chanel Tunnel on a huge trailer behind our camper van” plus “we will be going hell for leather to catch our booked slot” if I remember correctly it is a VW campervan, which are excellent vehicles but notoriously under-powered. Add to that an English Builder (Bernard Cribbens?) already a month (guess) behind schedule and I think we can safely say that some interesting future posts may be expected. As we know they are equal to any task or challenge, so it only remains to wish them the best of luck, hope they have time to enjoy a visit to Cooden Beach Hotel and avoid Stanstead.

Right said Fred, gotta take the wall down,
Oh dear, but if it is a listed property maybe understandable.

that there wall has just gonna have to go,
took the wall down
even wiv it all down
we were getting nowhere and so………
Charley and me had another cuppa tea
and then we went home.

There could be a Raccon right behind you this very minute and you wouldn’t know it – be very afraid!

A telepathic landlady, our backyard has frequently been visited by a mother and four juvenile raccoons this summer, scavenging every garbage day….today is garbage day.

For those with typing issues:

It probably wont run on your ipad, but it will ‘write’ what you verbally recorded on your ipad, once playing the mp3 into the software running on your PC.

Dragon’s good – I used to use it on the PC but a Mac has dictation built in. Not sure about the iPad but the MacBook certainly does

All the best for the fun and joys of the carnival that seems to attend most removals. They’re always fun up to the point when someone tells you that they don’t come fitted with an ‘I want to get off’ switch

But, of greater import, is the hostelry name to change? ‘The Legless Otter’, or such like, wouldn’t have quite the same ring, even if on occasion it were true to type