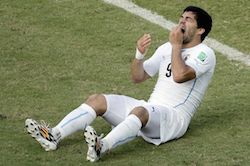 The tragically injured Louis Suarez is ignored by the Referee.

Fifa and various ill-informed football commentators are making strenuous efforts this morning to deflect the blame for the tragic crushing of 32 innocent molars in Louis Suarez’ mouth by the irresponsible actions of a shoulder belonging to the Italian player Giorgio Chiellini.

The truth will be extracted!

As the temporary wearer of the red Liverpool No 7 shirt, Louis is an honorary Scouse, and will be rabidly defended by an army of hysterical football fans.

Louis, whose personal motto is ‘If you can’t beat ’em, eat ’em’, has been the subject of vicious attacks by foreigners before.

Branislav Ivanovic’s forearm dealt a mighty blow to his molars in 2013, a tragedy dwarfed by the incomprehensible decision of a decidedly dodgy three man supposedly ‘independent’ regulatory commission to prevent the hero of Liverpool from single handedly winning the next ten games.

Nor is this the first time that a shoulder has been employed to crush Suarez’ impacted incisor brilliance – in 2010, Dutch player Otman Bakkal employed his Trapezius muscle to force Suarez’ into an unavoidable over-bite situation. Suarez gracefully accepted an incredible seven match ban which should have been contested. It is the mark of the man.

Now Liverpool fans are demanding a public inquiry into statements made by foreign referees claiming to have seen ‘nothing’ – statements which had been significantly amended. Doctored photographs appearing on the Internet showing alleged ‘bite marks’ are ‘unremarkable’ and ‘not exceptional for a social or leisure occasion’.

Television replays show Suarez moving his head towards Chiellini, who responded by swinging an arm deliberately into Suarez’ mouth before chasing the referee to apparently insist he had been bitten on his shoulder.

Once again there are growing fears that one of the most gifted players on the planet could be heading for the exit door, simply because of the authorities insistence on forcing players to wear gum guards, thus bringing their overbite several centimetres in front of where any self respecting Uruguayan expects it to be? If the half time oranges hadn’t been removed from play, would Louis have been able to exercise his molars in a satsuma?

Regardless of how reprehensible the actions of these foreign players were, he is Liverpool’s biggest asset (£80 million quids worth)(and morals don’t feature highly in the business of modern football).

Should La Liga be allowed to steal this much maligned son of the Kop? Liverpool demands answers and Justice for the impacted 32 Molars.

I wonder if Ivor Bigdril lives in the same road as my French dentist: her road is – truthfully – the Rue Filhole.
Rather more concerting than this further evidence of FIFA’s entirely honest approach to the World Cup in relation to venues, vote rigging and Spanish teeth is the decision by an FA aka Newscorp jury to find Roy Hodges guilty of conspiracy to be crap, but the players not guilty of being crap…
http://hat4uk.wordpress.com/2014/06/25/hackgate-trial-latest-hodges-guilty-newscorp-cleared/

FIFA ? What is a FIFA please?

What about the “steak holders” that we hear so much about – shouldn’t they be consulted?
On a slightly more serious note, even as I write I am listening to a national radio phone in on which a Liverpool fan is putting forward the defence that if this had happened in the street, no one would be bothered, it is all a witch hunt, etc etc. In itself that is a culturally interesting phenomenon, as is the reaction to chomping on a fellow human being, or even an Italian defender. Why is that considered so much more taboo than a swift punch up the bracket? Since there is a similar issue with spitting, is it to do with a taboo of bodily fluids?
Actually, Suarez is a superb footballer with a very nasty streak. The first thing he did after his little was to hurl himself to the ground and writhe about feigning injury. Cheat.

Apparently the bites to avoid are: human, then cat, then dog, and the the rest. Human bites are the most prone to becoming infected. I am sure that the appropriate risk assessment documentation is completed and available for inspection before every match. If not, for what have we laboured all these years?

“Once again there are growing fears that one of the most gifted players on the planet ………..”

A footballer gives another a hickey on the pitch? And this is a bad thing? I’m totally confused. You’d have thought that the media’s front pages would be flying rainbow flags the day that happened…

I don’t think CSI Uruguay will catch on though. The plots would be a bit repetitive

Even with the teeth removed, any novice Gumchew would be able to work out who had molarested whom

You are naughty ! Remember, it didn’t end well last time you denigrated the city of your youth -we were trolled out of house and home for weeks, if my memory serves me right.

Yeah… be careful Anna. In the city where there are more tripping claims per head of population (i.e. people ‘tripping’ over less than billiard table smooth pavements) it pays to tread carefully!

Is this football’s molar maze?

A centre back tried to tackle him once, he ate his deltoid with a donna kebab and a nice Birra Moretti!!!

Yes, one would thought a career in Rugby would have been more to a the Uruguayans taste!!!

That’s getting close to being too offal for words

Yes I fear so, but by far the worst and most deeply distressing/disturbing chapter of that whole tragic saga is still kept from the general public to this very day. Namely that once they had eaten all of their fellow passengers, the flight crew and the cabin atendants etc. They found themselves reduced, out of sheer necessity and the primal urge to survive, against their better judgement, against all common decency and in the face of everything that they had been brought up to believe in… to actually… eat the in flight meals!!! Oh the humanity…

Very true. Friendships only stretch so far as regards their ability to accommodate. You want a C-46 if you want to haul lots of meat

(If you can beat ’em, have a nibble anyway; though it would seem that sweaty Italian has a less than appetising flavour.)

Apparently Thomas Harris is writing a Hannibal Lecter prequel which describes young Hannibal’s days as a forward for Liverpool F.C. before he made it big as a man-eating psychiatrist. It is not known if the released book will be called Silence of the Fans or Red Molars at the Kop.

Yes indeed, I myself have heard that rumour. Apparently Harris has hinted that it will feature a new antagonist to match his wits and his culinary cannibalism skills against Hannibal. It is still a rough draft at the moment but the new character may go by the moniker of “The Tooth Fairy”, Louis Gums, or “The Red Molars.”

Do you think he might have been in the cast of Barbarella when he was a baby?

Cyberdyne Systems were somewhat disappointed with the performance of these early model Terminators. Funding was later withdrawn and allocated to the much more promising T600 and T800 projects.