Time was when the travelling folk from Romania, in their colourful horse-drawn vehicles, would ask a local farmer for permission to stop for a few days, and to feed and water their horse. They might even sell him a few clothes pegs.

That was before the advent of ‘World Heritage Sites’. Nowadays, councils have a duty to provide a space to put the travelling man’s caravan for a few days – EU Race Directive (2000/43/EC) – and if the council has the misfortune to be in a ‘World Heritage Site’ – gosh, it gets expensive.

You can buy a house in Twerton for £160,00 including the price of the land. So you may wonder why, given that the council already owns land in Twerton, it is proposing to spend £192,000 on each small piece of that land, a total of £1.8 million pounds, landscaping that land to the specifications demanded by today’s ‘Travelling man’. It is categorically not building a house on each site…goodness me no, today’s Travelling Man doesn’t want a house. Even though the ‘Preferred Options Stage Detailed Site Assessment Report’ says that you could have 15 houses on the space occupied by every six of these ‘pitches’.

‘Modern Travelling Man’ wants a driveway that will accommodate a trailer and a caravan. He wants a shed that he can lock up; he wants a self-contained bathroom and kitchen in an ancillary building; he wants an ‘outside drying area’ for clothes; he wants outside lighting, drainage, water, and gas supply, and the site to be sound proofed from the nearby road so he can get a good night’s sleep, and he wants the site to be landscaped in accordance with a World Heritage Site. The Homes and Communities Agency which is chucking £750,000 into the pot to pay for all this is insistent on these standards.

But that is not the end of this council’s troubles.

For not all the Twerton ‘Travelling Men’ are fourth generation Romanies wedded to their way of life, some are what might be termed ‘New Age’ travellers, and they are ecologically minded; they want ‘low-impact’ environmentally friendly material to be used – they don’t want any old hard-core dumped on the site, they want to be assured that the hard standings are lime and asbestos free, they want ‘off-grid’ and sustainable energy sources, not expensive national grid companies. They probably want to be assured that there are local ‘organic veg boxes’ available at the nearest food bank…

All is not lost for the rate payers of Twerton though, for they have been assured that the council will recoup that £1.8 million in, er, around 23 years. They are working on the basis of 80% occupancy of this desirable new all mod cons site, at around £100 a week rental, roughly the same as a council house in the area. 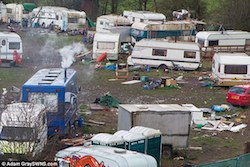 Trouble is, Travelling Man doesn’t like that idea at all. He says if Twerton Council think he can pay that, he will just push off and find another piece of wasteland, and in no time at all, it will look exactly like this – his present site.

So what is Twerton Council going to do with a beautifully landscaped, outdoor lit site with ancillary buildings which have no bedroom, but have a kitchen with washing machine and dryer, a bathroom, a ‘utility area’ and extra long driveways?

Your suggestions on a postcard.

Flog it to the Caravan Club

Good one – superior camping site for the discerning traveller to a world heritage site?

I meant for ordinary folks, you know – taxpayers, not pikeys!

Use it to store spare tarmac?

Why choose a World Heritage Site for goodness sake? The local ASDA or Tesco car park would be far cheaper, make much more sense and providing a suitable section available to the Travellers could form a part of the Planning Permission conditions for their next superstore build, just as putting speed ramps in the local streets often is made a condition. From what I recall these West Country councils keep knocking back the multiplex applications so everyone would gain.

If the average man or woman on the street wishes to spend time in a caravan they go to a caravan park and pay for a pitch. I have never understood why councils should be obliged to provide sites for anyone just because the consider themselves to be Romany or “travellers”. There are plenty of private campsites around the country, they just cost money to stay at.

Romanies and Romanians are not the same thing, although there are some Roma in Romania, as there are in most of Europe. They are thought to have come from India originally many centuries ago. Your ignorance insults Romanians and Romanies too.

What kind of people are insulted by ignorance?

Gypsies eh? In the 60’s we used to them come around the doors. They would be flogging pegs and palm reading and the like. My Mother was wary of them and my Scottish Granny was. Dry keen that we didn’t upset them in case the got jiggly with their spells and such. I thought it all a load of tosh.

Alas I was writing. They are indeed a race to be wary off. The councils seem to she the EU must have been affected by one of their spells which made the EU create laws which suited the gypsies. Power indeed.

I like to think there is room fir everyone to do their thing or I used to anyway. The few gain benefits which the many have to pay for.

I may start up a minority group. But what cause could I pursue? I think the best ones have all gone. I know. The cause to stop minorities getting special treatment! Done deal. I’ll register it as a charity in a moment.

Use it for bike and car rallies!
The pikeys only THINK they are hard men, try your bullshit on the Hells Angels, Outlaws, Satan’s Slaves etc. and they wioll soon find out different.
Gypsy Rose Lee: Insults to pikey scum write themselves, simply reporting the truth is enough. Don’t like it? Tough! Pay your own way like the rest of us have to.

It’d be more cost-effective for local council-tax payers for the council to fly the Caravan-Using-Nomadic-Travellers & their equipment (back) to Romania.

The “Caravan-Using-Nomadic-Travellers” you refer to are NOT Romanian. (Please see my answer to Robert the Biker below.) The travellers you refer to, new-age included, are British, although some of them are from Ireland originally.

Gypsy Rose Lee was not a gypsy. She was a famous American burlesque star who made a fortune during her lifetime. I am not a gypsy either. Gypsy Rose Lee is not my real name. My father was the British Ambassador to Romania when it was still behind the Iron Curtain. I simply wanted to point out that Romanians and Romanies are not the same thing. Nor are there any “fourth generation Romanies” in the UK. Their ancestors have been in Britain since the fifteenth century.

As for paying my own way, I’m afraid I’m an OAP and as such entitled to the same benefits as any other pensioner.

The BBC had a Romany of their very own, back in the day, and very popular he was too.
http://www.romanysociety.org.uk/romanyhtml/romanyindex.html
“Romany’s real name was the Reverend George Bramwell Evens, a Minister of the Methodist Church. He was born in 1884 and died in 1943. His mother was a true gypsy, born in a caravan (or ‘vardo’ in Romani).”

He wrote a cracking set of books for youngsters introducing them to the countryside and it’s wildlife. ‘Out with Romany’, ‘Out with Romany Again’, etc. Far better than the modern Disneyfied rubbish the BBC feeds people. He had a faithful companion in his dog, Raq. His vardo was preserved at Wilmslow in Cheshire – may well still be there. The books can be had for not very much from secondhand sources such as Abebooks. Highly recommended.

PS – He was the absolute opposite of the modern ‘traveller’ – a true Romany.

I read and enjoyed those books as a girl.

Gypsies/Roma, along with Jews, gays and disabled were all key target groups for Hitler’s negative actions. With varying degrees of justification and success, they have all played the ‘victim card’ for the last 70 years, hence the ‘most-favoured status’ now accorded to them all by guilt-trip governments.

I note that when significant numbers of Jews, gays or disabled move into a neighbourhood, there is no measurable increase in the local crime-rate. Just sayin’.

‘Twerton Council’ is really Bath and North East Somerset Council and they have all the answers here..

“Gypsys, Travellers and Travelling Show people”
Cher will have her work cut out getting that to scan for her re-release.
https://www.youtube.com/watch?v=TOSZwEwl_1Q&feature=kp

Obviously there will be deviants in any population, and one can see that some travellers will just be wanting to live as cheap as possible so they can spend benefit money on drugs and cider, but on the other hand society must try to offer a hygienic and healthy out for the benefit of the children, who will otherwise probably succumb to nineteenth century morbidity levels due to disease, malnutrition, lack of prenatal care, etc.