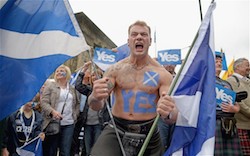 1.an abrupt, exclusion of Scottish MPs.

2.the act or process of ejockulating, especially the discharge of Salmond supporters by Westminster parliaments.

It is the frequently repeated manta of ‘no taxation without representation’ that is quoted to explain why, if Alex Salmond wins his referendum in September to dissolve the Union and let Scotland become an independent country, that the 59 Scottish constituencies should continue to have an MP representing them in Westminster. The one and a half million Britons that Cameron tells us are now living outside the UK don’t have such representation, and they are still subject to UK taxation, so I see no reason why the same should not apply to those Britons living in a Scotland that is in the process of becoming a ‘foreign country’.

Neither do a bevy of Westminster MPs, who yesterday brought the matter up in Parliament. In a debate in the Common yesterday, Angus MacNeil, the SNP MP, called for clarity on what would happen in such circumstances. Last month Mark Reckless, Nigel Mills and Nick de Bois, all Tory MPs, voted for the Scottish MPs to be trafficked back north of the border. They lost the vote because large numbers of Labour MPs voted to allow the Scottish MPs to stay on – and many Tory MPs abstained – where they would be part of the ‘British contingent’ negotiating the division of national assets – and debts – between Britain and their fellow countrymen.

Labour hold 41 Scottish seats, the Lib Dems 11, the SNP 6 and the Tories just the one. Excluding Scottish MPs from the 2015 election would make a vas deferens to both Labour and the Lib Dems.

Senior Tories, or ‘Top Tory Politicians’ as the tabloids would have it, are now grooming Cameron, whispering sweet nothings in his ears, as to how orgasmic a Conservative win he could have, were he to declare in September that since Scotland would be leaving the Union in 2016, no Scottish constituencies would be allowed to field a candidate in 2015.

Currently the position is that Scottish MPs would be asked to honourably resign their lucrative tax payer funded Westminster lifestyle in 2016 on the date of the dissolution. On past record I cannot see that happening. We are likely to see some unseemly struggles as they are parted from their expenses sheets.

On the other hand, constitutionally, they have every right to represent their constituents right up to the moment of dissolution. Including those endless committees where it will be decided how much debt and how many assets are passed between the two countries.

That seems to me to be a far more profound issue that requires clarification than whether they keep the pound, drive on the left, or any of the other daft issues that have been raised.

What think you – and your solution?

There is another serious issue that needs to be raised.

I am currently on hols, and forced to rely on my news on the website of ‘The Daily Mail’, reviewed under a cringingly slow internet connection.

On the lovely right-hand toolbar, which I usually ignore, I see that the Mekon-browed actor, Mr. Richard E. Grant, has just launched his own perfume, called ‘Jack’.

That would be Jack as in – as the Americans say – ‘Jack shit’.

In the name of God, why? And why not call his odiferous mess ‘Richard’ (or, more appropriately, ‘Dick’)?

Splash it all over, as Henry Cooper used to say on the old Brut advertisements.

Returning from similar cyber-isolation last night, I noticed in the duty-free shop that, despite the ill-bred mirth of those acquainted with Cockney rhyming slang, Ralph Lauren is still selling an after-shave called ‘The Big Pony’.

The serious issue is not that their MP’s should continue in a UK Parliament to represent their own local constituents in the meanwhile, but rather that they should not be enabled to automatically create a new Labour Majority in the UK for the next Parliament. It may be an illusory problem anyway because surely if the referendum votes for Independence in 2014, then surely in 2015 the SNP should sweep their own electoral board.

Oh, I forgot the solution. The solution must be a Lab/Scots Lab Coalition government, if that’s what it depends on, and they should sit on their own benches in that parliamentary ghettoed way. That way it will be clear to the electorate that we will are living in a temporary and disunited Queendom, and the clock is ticking. It would also help public clarity over the divorce negotiations as to who keeps which furniture and who is negotiating on who’s behalf exactly.

The introduction of fixed-term 5-year Parliaments by the current administration makes the situation more complicated too, so maybe there should be an undertaking for a fresh election for England, Ulster and Wales once the schism formally takes place.

Is a Marxist prostitute more free and virtuous if she [or he] were to change their white pimp, to a black pimp?

And how can Scottish Nazis be so deceived, that they call independence from the UK ‘a liberation’, whilst they plan to go sporon-deep into the maw of Brussels?

Very good point. I didn’t even see a report in any of the papers of this Commons debate! It seems fairly obvious to me these MPs should represent their constituents up to the moment Scotland is no longer part of the Union. Any thing else would be depriving Scots of their representation at a particularly important moment (as you so rightly point out).

Should Scotland declare independence, then it must be made clear to candidates wishing to represent Scottish constituencies, that wages & expenses paid from Westminster coffers cease the day Scotland leaves the Union in 2016.

No Golden Handshake, no Lump Sum to compensate for returning to reality, and, return of all loan computers, equipment etc.

If Scots MPs are to be allowed to continue to represent their constituencies in Westminster after Scotland becomes an independent country, may I suggest that we extend the courtesy to the USA and ask them to send us a hundred-or-so MPs…? After all, they also declared independence a while back. Seems logical.

I keep re-reading, “represent their constituents” and, no, it still does not make any sense. These parasites represent no-one except themselves and their expensive lifestyles, paid from our taxes. Since the EU now dictates at least 3/4 of all our legislation, MPs’ salaries should immediately be reduced by a similar amount – then just watch this West Lothian question vanish!

Notwithstanding some local and petty arguments and differences, I find the thought of a break up of the Union deeply concerning. I am English, having lived in Scotland for over 20 years. I never considered that I was living I a foreign country.

The referendum is a mess – and potentially a dangerous mess

@Hysteria
Will English folk resident use their vote do you think? Or abstain as they feel it is not their business? As an Englishman in England I kind of feel like the Ukrainians must feel about Crimea. I’ve had no say in the matter, but if they want to leave the union, how the heck am I supposed to convince them otherwise?

Moor, one thing you and every one forgets is the question on how and why we have now reached the point that the Kingdom we live in today is about to be broken up. Even after a NO vote if these hidden issues are not dealt with then with in the next decade the Kingdom with no longer exist.

There is a feeling (at least from me) from some up here (Scotland) that the United Kingdom ends in Manchester and government that governs with the priorities of the south east as if the rest of the UK does not even exist.

Even culturally (at least until recently) watching the taxed paid BBC to the monopoly licensed ITV/Ch4 you can watch from 6am -12pm/7 days a week it is as if Scotland does not even exist and the UK is basically the south east of England.

There is likely to be a NO vote in September however the Independence issue is not going to go away despite what some may claim.

Was meant to be posted as “john”, don’t no why I put “Moor Larkin” in the name field

We plan to vote in favour of the Union – call me old fashioned ! In fact one of us is flying back at great expense to ensure we get to vote! All the Scots we know are horrified by the prospect of a break-up. I hope for the best but we are already thinking we will need to sell our beautiful home and move back to England. As a Brit and Unionist I regret having to even cosnsider the prospect .

I also believe in the Union – it has always made sense to me, if not simply geographically, then economically. The main movers and shakers in the Union coming about in the first place were products of the Scottish enlightenment, Edinburgh intellectuals smart enough to realise the same romantic and archaic image of the Scotsman that Salmond and Mel Gibson are so fond of evoking was an irrelevance that was holding Scotland back. And for good or ill, we had a BRITISH Empire, not an ENGLISH one; and that was a product of the Union. Alex Salmond is a cynical opportunist, shamelessly playing on Celtic sentimentality in the same way the IRA used to – and Ireland is a fine example of how independence from the rest of the UK can work. It’s a wonder Salmond doesn’t walk about dressed as Bonnie Prince Charlie all the time.
One area in which the four constituent nations of the UK have traditionally been separated is football, and what do we have to show for it? 142 years since the first ever international football match (England Vs Scotland, 1872) and the only honour is England’s solitary World Cup win in 1966. When it comes the UK, the whole is greater than the sum of its parts – as separate nations we’re like Beatle solo albums. The problem for the ‘no’ campaign at the moment is that it’s being led in the main by public school-educated southern Tories, and that’s hardly likely to persuade anyone north of the border to reject independence. I am of Scots descent, so I feel qualified to vent ma spleen; I just wish I was entitled to a vote.

If Scotland votes to leave the UK then those MPs of Scottish constituencies should be removed from the UK parliament immediately, and their voting rights and privileges as UK MPs immediately revoked.
Access to any UK government or political resources whether diplomatic, military, financial and so forth, whether on laptop, on-line or in person must also be removed.

Failure to do this will mean foreign interests will have access to information and direct influence within the UK HoC, likely decisively so to their benefit, and against the interests of the people of the UK.

The Scottish government will represent the interests of ALL the Scottish people to the separate government of the UK. That is what the Scots are voting on!

As a Scot living in England, I get no say at all. But one of my Scottish resident friends sums it up thus, “Salmond is promising sweeties for the weans and Buckie and Tennants Super for the alkies, just to get them to vote for independence.”

@UK Fred: Yes indeed. According to Salmond, the magic money tree will burst into flower as soon as they get rid of the English, and nobody will hear any of this tedious nonsense about having to pay for stuff, every again.

It’ll be paradise I tell you.

How could anyone not believe him?