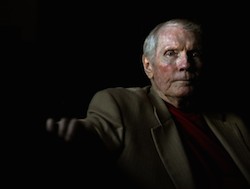 But there will be no funeral. Surely you have to have a funeral? No, actually. The law only says you must dispose of the body of the person who has died ‘by burial, cremation or any other means’ – if you are opting for burial, that means consecrated ground and that means entanglement with the established church. If you are opting for cremation you can just load the dear departed into your mate’s pick-up truck and drive him straight to the crematorium.

I do actually know someone in France who was faced with what he thought was his duty to ‘dispose thoughtfully’ of his older brother, the one who had run off with his wife and left him severely in debt for many years, who did just that – in the back of a plumber’s van complete with all the tools. The ever so slightly non-plussed crematorium, several hundred miles away from the scene of the death (my friend didn’t speak French so had opted for the only crematorium he knew of in his home village) silently untangled the stiff-as-a-board remains of (strange, he was called Fred too) without comment, demanded their 750 Euros and went about their business without further bureaucracy. France can amaze you sometimes.  It was only weeks later that my friend remembered he had tucked Fred’s death certificate into Fred’s top pocket with a flourish and a pat, in a final sardonic gesture of brotherly solidarity – and thus that had gone up in flames too. Now that took some sorting out. It’s always the paper-trail that floors you in France.

But back to today’s Fred. Why no funeral? Surprising, because Fred was a staunch church attender and deeply religious; he was head of a large and exceptionally close family. Moreover, there were large numbers, perhaps thousands, of people who would have been only too proud to have been able to say they had attended Fred’s funeral. That last may hold a clue.

For Fred Phelps, ’tis he, was famous, world famous, for attending other peoples funerals. I cannot find any example where he was actually welcome! Still puzzled? Try ‘Fred Phelps, head of the Westboro Baptist Church’. You’ve heard of them, to be sure. They are the outfit that regularly turned up at the funerals of  those who died of aids with placards that read ‘God hates Gays’. Fred didn’t just hate Gays though. He hated Jews, negroes, immigrants, politicians, celebrities, even other church leaders who didn’t accept his particular brand of literal reading of the bible. Fred was the ultimate ‘Troll’ – he even managed to offend the bigoted and intolerant Klu Klux Klan – you have to give the man some credit, not many people manage to pierce their thick skin and find their caring, sharing, molecule. They used to turn up at the same funerals to demonstrate against Fred!  Not all the funerals, you understand, even bigots stick to some of their principles.

So the funerals of military heroes turned into bun fights. For in Fred’s mind, those who died in the field of duty were being punished for dying on behalf of a nation that accommodated Jews and gays, immigrants and all the other people Fred preached against. The TV cameras jostled for front row seats as inflammatory placards were ostentatiously waved in front of them and the Klu Klux Klan turned up in their best bed linen. It made for great TV, and also made Fred’s church world famous.

The amount of media coverage this man garnered, you might have thought that he was part of a large group of religious fanatics; the truth was, he was just a sad old man with a placard, whose church amounted to 40 of his close family plus a dozen or so individuals disconnected from society who had found some comfort in being part of this dysfunctional ‘family’ cult. That’s right, 40 of them. You wouldn’t think 40 individuals could make such a noise in the world, become so famous.

They can with the aid of rolling news, and the need for colourful, confrontational, pictures; the need for keyword hits – Aids, Military Heroes, Gays, Hate crimes – these are the stories the media feeds on and these are the reasons that Fred become world news – and a million people who had never heard of Topeka in Kansas descended on the Topeka Citizen site last week doing wonders for the advertising reach of ‘Mr and Mrs Doug Clemence’s Farm Sale’ (including air plane items [nooo?] and 200′ of decorative fencing…) and the Lake Shawnee Golf course. 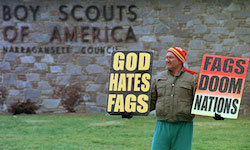 So, farewell Fred, King of Trolls; you fed the media beast well. You did wonders for the anti-smoking campaign too.

That is some achievement – your family not being able to have a funeral for you because it would have been too damned popular.

Anna, you are priceless!

To be fair to the Rev Phelps you could not accuse him of discrimination; he seems to have hated everyone equally.

And the moral is that those who can control the media’s agenda(s) will rule the world.

Phelps’ daughter says her father took up civil rights cases because of his upbringing. Phelps was born in the Deep South during segregation.
“He grew up in Mississippi seeing the way they treated black people,” Phelps-Roper says. Her father didn’t adopt the same racist beliefs only “because of the mercy of God.” Having people hate them is nothing new for Phelps and his family, she says. People shot out their windows and threatened her father because he stood up for blacks in Kansas.
http://edition.cnn.com/2010/US/05/05/hate.preacher/
“Phelps was disbarred in 1979 by the Kansas Supreme Court after he became the subject of a complaint alleging witness badgering. The court wrote: “The seriousness of the present case coupled with his previous record leads this court to the conclusion that respondent has little regard for the ethics of his profession.” Phelps-Roper contends her father was disbarred in Kansas state court for standing up for blacks. “Those people hated us for that work,” she says. “The state hated us for it. They could hardly bring themselves to be civil because we won those verdicts.”

He was, of course, a Democrat…

No to mention a lawyer……….
That article says 11 of his 13 children are lawyers too……
Blame it on the genes maybe……

“That is some achievement – your family not being able to have a funeral for you because it would have been too damned popular.”

Blair ain’t shuffled off this mortal coil… yet!

If “Ding, Dong, The Wicked Witch Is Dead” was deemed an appropriate symbol by Labour for Lady Thatcher’s funeral, what for Mr Blair?

The Tory song and dance act is already signed up

Julia, Fred was a Democrat until 1992. I’d stop believing everything that Fox News pumps in your direction. Of course they’d say something as inaccurate and unresearched as this. They’re fools. http://americablog.com/2012/12/fox-news-fred-phelps-is-left-wing.html – they

Does this Fox news presenter say “You’re obviously a nut” under his breath at 1.35 – LOL

Curious that it is a daughter who seems the most vehement about these biblically-condemned perversions……. must mean something.
I gathered the one offspring (male) who had stepped outside the family consensus, is an atheist.

Nothing like a bit of hate to inspire, well, a bit more hate – have a look at this short clip Phelps Vs the KKK – the poster says that he did survey on the vid, who would you support the if the KKK protested a neo nazi rally – the result; most said they’d support the KKK !!!

Both came from the same Medieval tradition surely?

The joke of it , or the irony if you prefer, is that Ol’ Fred was right. Right in so far as he was more American than everyone else. Being of a theological bent and married to a theological Bint (who was raised to believe laughter is a sin) I have looked into Fred’s beliefs and can tell you that Fred would have felt right at home on the Mayflower.

These days we tend to imagine that those Anabaptists who fled England for the New World were gentle, wise men and women who merely longed for the freedom to worship in the way they chose. The truth of it is however that the Founding Fathers were…well imagine a Fred with the English of Shakespeare and the saintly tolerance of John Knox wrapped up in a ruff (not that the Founding Fathers would have worn anything so ‘prideful’ as a ruff I expect).

There are reasons why you can walk into a US Starfucks with a Sig Sauer on your hip but not a cigarette in your hand , and some of those reasons have to do with Fred’s not-so-forbearing forebears!

Just ‘cos he didn’t like fags does not mean he aided the anti -smoking industry.He did not much like cigars either,

Nothing wrong with the view that your body is a temple. Is the big deal that he didn’t like faggot recipe having never tried one?

Blair Blair 60% air……blown away…….don’t come back another day. We could have skipped to that when we were kids.

Fred hated ‘……..politicians, celebrities, and …….other church leaders….’ . So, not always wrong, then.

There’s no smoke without hell-fire

Turning up with a sign that read “Satan luvves Fred”.

“The amount of media coverage this man garnered, you might have thought that he was part of a large group of religious fanatics…”

I believe that the Westboro Baptist ‘Church’ is very possibly a front used to discredit Christianity and this is why the controlled media made such a big deal out of it worldwide. All the big players in politics today need Christians out of the way and discrediting us like this is good propaganda.

Is that the formal position of the Church of the Latter Day Apologists for Ignorance of Christianity?

@the blocked dwarf
Is sex inherently sinful then?………..

Ah, the ‘Succour them with Sex’ churches. Go forth into the highways and the byways, and persuade them to come in, and find that Holy Rolling in the Hay will be the answer to all their spiritual desires.

Don’t think you will find much credence given to that as some overwhelmingly advanced theological revelation, by mainstream churches, high, middle, low, liberal or fundamental, or to any ‘Church of the Latter Day Suckers’ and the loons who make up their congregations and leadership, will you?

There’s a succour born every day

Front? Pull the other one.

Looney Toon? Will probably get his own cartoon series