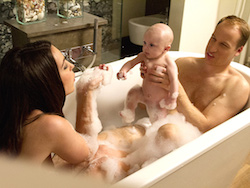 “Let me tell you about the very rich. They are different from you and me. They possess and enjoy early, and it does something to them, makes them soft where we are hard, and cynical where we are trustful, in a way that, unless you were born rich, it is very difficult to understand.”

Ever since Steve Irwin introduced his one month old son to a 13′ crocodile at feeding time – favourite food, small mammals! – celebrity parents have vied with each other to dangle their new born temptingly in the path of danger. Michael Jackson dangled his over a crowd of groupies, ‘Blanket’ survived.

Those of the horsemeat-eating classes tend towards a Pit bulldog, cheaper to acquire than more exotic animals. Though liable to have disastrous results. Not least for the Pit bull.

Simon Cowell showed his inner mincing self by laying his new born down in the path of a couple of effete cosseted Yorkshire terriers to world wide derision. Fatherhood hasn’t fooled anyone Simon.

Now the Heir to the throne is to show the world how the truly macho do it. Prince George, named after our dragon-slaying national saint, is to be taken to Australia and put out in the back yard to play with a mob of 15 stone 6′ Kangaroos…according to Hello magazine (no link, you’ll just have to go to the dentist like I did, to read it). Apparently he ‘will love it’.

Child’s play! Real Aussies send their kids over to Ranger Dan in Queensland for ‘Day care’ where they get to play with some of Australia’s most dangerous animals, including snakes, crocodiles, scorpions, centipedes and a Python called Phoenix.

I thought he was called George to ‘show the continuity’ of the Royal family. For a nation obsessed with ‘child protection’ we sure have some funny habits.

If David [baby-muncher] Icke is to be believed, George should count himself lucky…………..

Fair do’s Anna. Give a fair suck of the sav, love. The Real Aussies have their kids in the humpies outback where an ancient ‘uncle’ can play with them to decide if they are marriageable. No-one is allowed to criticise as it is ‘traditional culture’. Your Roo would put ’em in a pouch and give ’em a suck on more than a sav.

I can tell you now that some of the lethal creatures in this country give me the willies and I live near the city centre in Melbourne.

Melbourne – the city of lawyers? I quite understand!

Ha ha- some of my best friends are lawyers !. I was referring to the small spider things that frighten me to death, the bigger they are the less dangerous. There is the anecdote about Prince Charles when he was at Timbertop school for a term and other students spotted a giant Hunstsman spider above his bed ( they are harmless but huge). They waited for Charles to come and when he did he spotted it, picked up a magazine, scooped it up and gently placed it out the window. His fellow students were hugely respectful to him after that.

Have to disagree with Fritz ( an alcoholic American killed by a chocolate bar FFS!). I have had the pleasure of knowing several persons of high station-people born with not just a sliver spoon but an entire 17th century, silver, hand wrought, banquet cutlery set in their mouths. They are no different under the layers of ermine and breeding, they just have better vowels and health care plans.

They also have an instinctive knowledge that , say, buggering the maid over the stuffed mongoose is simply a rite of passage (back passage?) not exploitation of the Lower Orders. There was a time, a time not that long ago, when we judged Princes Of The Realm by the number of bastards they sired, how much Sack they could drink (and spend time in) and not what their biscuits cost or their unfortunate tastes in fancy dress.

A real prince would be storming the walls of Buenos Aires armed only with a particularly sharp fruit knife, before rodgering his way through the massed ranks of the Argentinian Girls Samba School, not waving his naked brat around on camera….a photo which if found on anyone else’s hard drive would result in prison time these days.

Too right. His Hanoverian ancestors must be spinning in their graves. Dissipated, debauched, deviant and dissolute reprobates, siring bastards left right and centre and dressing like Glam Rockers – that’s what I want from my royals. Quentin Crisp once said if he was the Queen he’d walk about in the crown and ermine ensemble every day, and I know what he means. If we have to have a monarchy, let’s have a proper one, not a water-down wuss version, for God’s sake!

Unlike most of us, little George has to be toughened up from an early age to enable him to face with some measure of equanimity a pack of animals so viscous, so devoid of feeling and so predatory that they make Black Widow spiders, Melbourne Lawyers and vultures look like cuddly pussy-cats. I refer, of course, to the British Red-Top Press Pack.

(P.S. Welcome back to the Blogosphere Anna. You’ve been sorely missed! Keep on getting better, too!)

Black Widow spiders are of course Red Back Spiders in Oz. Never seen one and don’t want to. I see the current Maori King will not be entertaining the royals as he says he’s “not a circus act”.