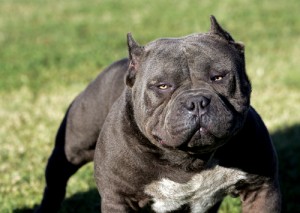 Would you? I mean really? You’d leave your 11 month old baby in the care of this charmer?

“Pit bulls typically lived in their owner’s homes, where they earned the nickname ‘nursemaid’s dog’ because they were so reliable with young children. In fact, “Pete the Pup,” the children’s friend from the old TV series ‘Our Gang,’ was a pit bull.”

So says the American Society for the Prevention of Cruelty to Animals.

Sadly the Pit bull’s ‘macho’ walk, balls swinging in the wild, half closed eyes with that ‘wot you lookin’ at’ expression, lurching from side to side in the manner of a heavy weight boxer on steroids making his way to the gym, has made it an attractive street accessory to those in need of an intimidating air.

But don’t we all know from the media that Pit bulls have a special ‘locking mechanism’ in their jaws that make them especially dangerous when they bite? Er, no, we don’t.

Domestic dogs: 320 LBS of pressure on avg. A German Shepherd Dog, American Pit Bull Terrier (APBT), and Rottweiler were tested using a bite sleeve equipped with a specialised computer instrument. The APBT had the least amount of pressure of the 3 dogs tested.

Karen Delise has written a marvellous book which is instructive in these days of media judgement – detailing precisely how the media came to demonise a dog previously known for its ‘nursemaiding instincts’ – and has found some brilliant examples of Labradors mislabelled as ‘Pit bulls’ because they had bitten someone, and a Yorkshire terrier apparently ‘mauled by a Pit bull’ – an event laconically described by the vet as not possible ‘unless Pit bulls are now carrying shot guns’ – the dog had a bullet lodged in its spine, nothing else!

11-month old Ava-Jayne is unlikely to be the last victim of a badly trained dog belonging to the new partner of “the most beautiful and adorable little girl” as she was described by her Father – Mother’s ‘last year partner’…..

After Ava-Jayne, it is the dog I feel sorry for.

Yes, I do worry that the delightful @AmBull_Bronson might be at risk . American Bulldog on Twitter (not pit bull)

I hear that Jimmy Savile (aka ssavvil)… had a pit bull terrier.

But he gave it to “glitter”.

I completely agree. once upon a time my bicycle was the subject of an attack by a pit bull when I left it outside a shop. I returned on hearing a raging gnashing sound to find the frothing dog clamped to the rear wheel. The reason for this, I subsequently discovered, is that the dogs are trained to attack and hang from tyres as a means of strengthening their jaws and ferocity. The dog was, needless to say, in the possession of two sly, ill favoured looking youths who might have passed for Orcs in the Lord of the Rings films. The ferocity of attack was truly frightening – it took 15 minutes to un-clamp the jaws.
I didn’t blame the dog a bit. I blamed the despicable owners.
I see this sort of thing very often – dogs who are obviously owned as both status symbol and weapon, by people who are self evidently not equipped pr minded to look after them. How do I dare presume to know this, some may say? Because I have 2 eyes and a brain and life experience and I know dogs. I love dogs and I would dearly love to have a little pack of rescue dogs – but I can’t, my life style does not permit me to give them the care and exercise they need. I content myself by donating to animal rescue shelters as an when I can: Rochdale Dog Rescue and Jemima’s Place are two worthy causes. Please donate.
Now this is a Libertarian orientated blog, but I often feel that this is a matter where I would like to wield the full force of a Fascist/Communists apparatus. It is very simple. You may not breed dogs without a licence, and you may not buy a dog without permission from the Common Sense Commissioner. The Common Sense Commissioner will ask questions such as what dog are you buying, why do you want it, and how do you propose to look after its welfare. The sanction for failure to seek and obtain permission is instant death, or deletion of your FaceBook access, which for a certain sort of person prone to owning these dogs is even worse. Gentle old ladies buying labradors and red setters will be given tea and biscuits. Moronic criminals dressed in burberry and bling and sallow ill favoured yobs or l wanting to own a pit bull, rottweiler or mastiff will be told no, you can’t have one. You can’t have any dog. Period. Why not? Because you are patently unfit to look after a burnt out match, that’s why not, now sod off and drink your alcopop and Ritalin. Wails of “Yuman Rights” will chorus forth! They will be roundly ignored, trumped by the right of animals to have a decent, caring home, fit to look after them.
As you can see, I feel quite passionate about this.
G the M

“Because you are patently unfit to look after a burnt out match, that’s why not, now sod off and drink your alcopop and Ritalin.”
Vintage Gildas – pure gold!

you not dead yet?

Absolutely not! You sound positively disappointed. Nor do you sound like the real Greg Lance Watkins.

Who he ? How about an update on that chancer who, memorably, called you ‘ some mad bint in France’.

Oh, didn’t fare too well in life after offending the Gods like that.

The details are too distressing for a family blog. Painful though, makes me shiver to think of a man suffering like that.

Let that be a warning to you all…..

@Glw: What a scumbag…

Anyway (and mindless trolls summarily dealt with) it is reported that the dog answered to the name ‘Killer’.

“now sod off and drink your alcopop and Ritalin”

That! That I want engraved on my tombstone! (*has just had another barely comprehensible ‘begging’ SMS from Eldest Son*)

The woman who got the first face transplant apparently had it ripped off by her pet labrador:
http://en.wikipedia.org/wiki/Isabelle_Dinoire

Rehabilitate the dogs, put down the owners.

Blimey, what a bitch she turned out to be

Just a small technical point: 320lbs, or 145kg, is a force, not pressure. Apply that force to a large flat surface and no piercing would occur. But concentrated into a small area it becomes capable of piercing hard materials.
So, although the pit-bull had the lower jaw clamping force of the dogs tested, it’s piercing ability could be much greater due to the number and sharpness of its teeth.
Here endeth the boring bit.

XX described by the vet as not possible ‘unless Pit bulls are now carrying shot guns’ – the dog had a bullet lodged in its spine, nothing else! XX

I would get a second opinion.

This vet was either stupid, pissed, or does not know what he is on about.

Since WHEN did SHOTGUNS use BULLETS!!??

Well, a slug perhaps, albeit such a thing would be less likely to lodge and more likely to obliterate.

He probably said ‘pellet’ and was misheard…

they miss what Mum will teach them about being a dog

This, sadly, isn’t true for many of the owners.

Lol, dogs are another thing we’ve completely messed up, like we messed up children, like we messed up marriage, like we messed up virtually any area of intimate relationship – by loading them with all sorts of expectations and projections which the poor old things simply cannot carry. You can tell we’re doing this by the speed with which we turn from sickly sentimentalisation of the object to demonisation of the very same object when it does something which doesn’t fit the “pretty picture” in our heads. This is pure childishness. Angel kiddies/feral youths, the whole purpose of life is coupling up/marriage is a prison, man’s best friend/devil-dog hound of Baskerville. This sort of binary thinking is typical of people who have no understanding of themselves are anything except the feverish little pit of need in their own insatiable bellies.

At a time when you will shortly be unable to enjoy a calming cigarette in your roofless sports-car if there happens to be a child secured in the passenger seat, it does seem a tad unbalanced that others are permitted to own and openly parade in public places, completely without ownership registration, training, license or mandatory insurance, something which can do potentially fatal damage to any innocents, be they adults or children, in the vicinity.

That’s the cyclists sorted, now on to dogs……..

It used to irritate me when little girls would quiver and shriek at the sight of my docile well-behaved Lab with their mothers clasping them to their bosoms grimacing menacingly at me. If a child ran up to the dog without caution I would teach them ‘dog sense’. But these mothers are doing the opposite -creating phobias and not educating their children around animals at all. I live in a sleepy rural town by the way – not the wild west of drug dealing estates. I suspect the same mothers may have a ‘people’ illiteracy too. No wonder there’s so much bad judgement about.

Alison Phillips in the ‘Mirror’ was, refreshingly, rather scathing of the mother’s choices:

The alleged inborn propensity of pitbulls to be more aggressive than any other breed is a complex and confusing issue, due to the very loose definition of “pit bull”. For example, if you check the wikipedia article on pit bulls (and yes I know wikipedia is not an especially reliable source), most of the dogs pictured look nothing like the dog pictured above.

In any case, looking similar doesn’t guarantee similar genetics. For example among humans, there is far more genetic diversity among Africans than in the rest of the human species put together.

Concerning humans, the nature-nurture debate is ongoing. Same goes for domestic dogs- for sure, some behaviours are hard-wired, others learned, and it’s a lot easier to learn a behaviour that resembles one that already comes naturally.

However, large scientific studies by people like A&E doctors (who are in a position to collect the relevant information) certainly show that pit bulls are responsible for a disproportionately large number of attacks.

And for practical purposes, I don’t think it matters whether the dog or its owner is to blame. Because pit bulls and their owners have such a reputation for vicious, unprovoked aggression, they are likely to be kept by people who value and aspire to these unpleasant qualities. They are a weapon, a status symbol, a form of living man-trap, and of course they’re used in the despicable “sport” of dog-fighting.

Saying the dog is not to blame is like the American gun lobby saying “guns don’t kill people, people do.” It’s true but essentially meaningless.

Pit bulls are like “snakebite” (lager + cider mixture). Many pubs refuse to serve snakebite on the grounds that “it makes people violent”. I’ve known very intelligent doormen who are totally convinced of this. Now although I don’t believe there’s any biochemical reason why snakebite should cause more violence than plain cider, I nonetheless would not serve it if I ran a pub here in my hometown. Reason being, that given it’s reputation for causing violence, why would you want to drink it- unless you thought a punch-up was an essential component of a good night out?