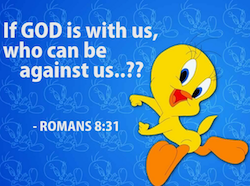 Who knew that God was into politics? Was this the State secret that Edward Snowden was set to reveal?

The answer according to the Limp-Dems Pensions Minister, Steve Webb, is that God is a Liberal-Democratâ¦

[…]the character of God, as revealed in the Christian Gospel, would suggest that God must be a liberal,â he writes.

Thatâs the atheist vote gone for a burton then!

Does God dwell in this earthly party in the form of a Chris Huhne or a Lord Rennardâ¦.? Who could have guessed that the God so (allegedly) solidly against homosexuality would have voted for Gay marriage?

Verily, doth Nick Smugâs lips move in tandem with Godâs commandments â âLet not your word be your bond, let not your written manifesto exist in the flesh, covet not the glory of heavenly rewards, but grab what you can from the EU whilst you are on this earthâ.

Remind me again, which party was it that was full of âfruitcakes, loonies and closet racists, mostlyâ?

Will God vote for or against legal aid cuts?

Just another member of the Good and the Great shouting his mouth
off.
Last time we had one of the Good and the Great publicly claiming close
links to God it wasâ¦â¦â¦.Lloyd Blankfein C.E.O. of that well known philanthropic
religious organisation Goldman Sacks ââthe words below are a cut and paste
from Wikipaedia
Commenting on Smithâs criticism of Blankfein for such
seemingly unprincipled leadership, particularly after saying in a 2009
interview that the firm was âdoing Godâs workâ,[19] comedian Stephen Colbert
pointed out that Blankfein never specified which god, and speculated that it
was perhaps Shiva, Lord of Destruction.[20].
But if the words quoted above
are correct it might give something of an insight into the minds of our Good
and Great . If one believes there is a God then it is reasonable to state God
is â¦..well simply Godâ¦.and the measure of all thigs â¦â¦and possibly a little
blasphemous (presuming one believes in a God and so blasphemy is a
possibility) to set God up to be judged by a set of human values encapsulated
in this case by the liberal democrat party. The language used seems to show
something of an elision and inversion of classical religious analysis â-God
judged by a human institution rather than the institution judged by
God.
Still the Lib Dems are enjoying the last few moments of their 15
minutes of fame so I imagine they are milking every last drop from it in a
search for their place in History as âGodâs partyâ.
Oh well August Bank
Holiday is meant to mark the end of the silly season âit just seems the silly
season starts earlier and earlier each year â-next years silly season will no
doubt start as it seems to have done in recent years without a break

Stop huffing and puffing fellas -see my comment on community gods to @joe
public -explains all. But not the mysteries of the universe.

A God who answers the question âwhat is your name?â with âIâm he that will
be/becomeâ is surely the father of all politiciansâ¦.ever

Where was John Humphrys when humanity really needed him to put some
questions of burning import? Leaving the interview up to the local Egyptian
talent may have been the âright onâ PC thing to do but I question if Moses aka
The Stammer was really the guy to be questioning God âThe Omnipotent Creator
Of Heaven And Earthâ Jahwe.

Hows about we check on a couple of them there 10:

Adultery â Ashdown
Theft â Laws
Lies â Huhne (and all the LD MPs who
said they would support boundary review in exchange for AV referendum)
Envy
â All of them
Greed â Huhne
Murder â Rumours abound about an ex
leader.

However, They do seem to have got the âsuffer little childrenâ bit with
Smith and Hancock.

Iâm sure many of you out there can add to the list.

Naughty, but nice! (to coin a phrase)

He was beaten to that particular limp-wristed punch years ago:

âChrist, if He were ever to come back to Earth, would immediately join the
Communist Partyâ¦â
Anatoly Lunacharsky, First Soviet Peopleâs Commissar for
Enlightenment and Education.

So according to an online translation service, Comrade Webb is a Ð²Ð»Ð°Ð³Ð°Ð»Ð¸ÑÐµ.
(all errors theirs).

And human nature being what it is, even he coulld not make communism
work!

@âChrist, if He were ever to come back to Earth, would immediately join
the Communist Partyâ¦â
Anatoly Lunacharsky @

My school-teachers in about 1967 told me the self-same thing, except they
expressed it that the early Christians (Catholics by default) were the first
Communists.

Clearly the god of the Lib Dems is no god of mine, nor many others either
it seems.

Dodgy business mixing politics with religion. Surely there is enough bother
already going on in certain parts of the world based on different takes on the
same religion? Our own revolution, ages ago, was goody goody puritans against
lace clad cavaliers. Most of us are sick of religions, including aggressive
atheism and agnosticism, due to all the nasty deeds recorded over the
centuries. Religions of all sorts, including Pagan, taking over other folks
ground and saying, âthis is mine and you are our inferiorsââ¦.bugger off. Last
done to us in 1066, and for a good few years after with aid of Domeday
recording. Castles and cathedrals anyone? Later we all did it to large tracks
of someone elses land we accidentally knocked into on our travels. Those poor
old Incas! They too took over lots of other poor slobs ground and sneered at
their ways of being. Africa is surruptitiously being mined for all its goodies
by a largely non religious country, of great size, with no particular
religion. So no religion not so good eitherâ¦..sorry canât win folks. Why even
take note of this windbag of a book about a non existant being, plus a minute
political group, who got into power because democracy is flawed to the
bone.

âThose who recognise in the Gospel a deep reverence for human freedom
and self-determination will find a natural home in the Liberal
Democrats.â

Surely theyâd see such aspirations in anarchy? For democracy is a
compromise of the absolute freedom of the individual, for the sake of the
state. That is, democracy lies between anarchy and fascism.

And I put it to you, that an individualâs belief and faith are not decided
by the ballot, therefore God must advocate either anarchy or fascism, as the
path to salvation, if politics is your bible.

Personally, I donât think that religion and the State should be mixed; they
are orthogonal, in a true Democracy. And those that try to ride on the back of
a God, to State power [or against it], are riding on an ass:

No chance of an LD in Southall, Salford or Bradford then.

Please keep your god to yourself Joe. This is an honourable tradition of
gods being specific to a particular community. The question was not is God
on my side? But: Are my gods are better than yours? The answer was always
yes until they were defeated, when they were obliged to adopt the
conquererâs gods.

@Anna âwill God vote forâ â¦â¦ someone to stand in for him on Judgement Day
â¦â¦. he could tweet a few twits who Iâm sure would oblige sending most of us to
hell, where one would surely meet a better class of person than the oneâs THEY
send to the other place â¦â¦. cheers Mr Larkin for the Judgement day inspiration
â¦â¦. !!

âOh Lord we beseech thee to consign the Liberal Democratic Party to the
dustbins of political history. We ask thee most humbly to release us from the
bondage of the European Union beg thee that we may find the strength to ignore
the United States of American and their calls to war. And if that be too
difficult, please let pigs fly to we may shoot for pork. Amen.â

God is an interesting case in that he was formerly extremely racist, but
latterly became much more inclusive. Whether this now qualifies him as a
Lib-Dem is a moot point. I guess it depends on whether the Lib-Dems can
overlook his past record of atrocities which includes credit for numerous Acts
of great destruction, for example Pompeii or Herculaneum, where many children
may have died from toxic gases. On the other hand, his contribution to
medicine cannot be overlooked, including great advances in the treatment of
epilepsy, leprosy, not to mention the halt and the lame.

Will he be tempted to bomb Syria back to the middle ages?

Thereâs also that nice little local problem in Exodus 11-4 where
Jehovah sent Gabriel to kill the first born of Egypt but I guess the
Libbers have Mid Staffs â whoo hoo, praise be to the glory of Nick.

Twitter â the last refuge of every scoundrel politicianâ¦..

â¦and soul of the world.