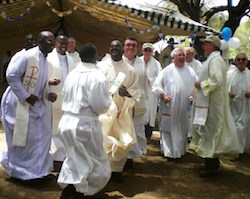 It has been quite a good week for the Justin Welby, the 106th  Archbishop of Canterbury. Quite unexpectedly and out of the blue, he launched his attack on so called “pay day loan” companies, such as “Wonga” with a call to arms to the Church and its followers to help put them out of business, not by fire, torture and imprisonment as might have been the case on days of yore, but by the simple expedient of allowing the Church of England, its premises and where possible the expertise of its congregation to help expand the network of local credit unions to make them redundant.

It was interesting and gratifying to note that this resulted in, if not a tsunami, then a groundswell of popular support and commendation. The fact that the Church’s multi billion pound investment fund happened to have made an indirect investment in Wonga was a bit of an embarrassment, but Welby took that on the chin, is not his fault and shouldn’t detract from a serious and important step. Payday loan companies feast on the unfortunate, those struggling on edge of getting by, sometimes of their own fault, but just as often not. Whatever George Osborne may say, we are not all in this together. There are very many who for perfectly good reason struggle in credit crunch Britain, and without a silver spoon in their cradle or perhaps the benefit of a financially acute mind, struggle.

He is an interesting chap, this Archbishop. He talks all posh and proper, he had a very good education, and he looks a bit of a chinless wonder. But look a little closer and one finds the alcoholic and absent father, the hand to mouth childhood under the care of his mother, making moonlight flits to evade creditors, and of course the years as an exec in the tough oil industry. These not only gave him greater hands on experience of a “proper” job and experience of real life far and away ahead of anything Osborne, Cameron, Balls and Miliband could ever hope to match. This included hostage negotiation in Nigeria in which, I understand, he put his own life at serious risk.

Welby, then, is a serious man, and a man to be reckoned with. In launching this campaign, he is fronting up to powerful interests and doing what a Church leader should so. This is muscular Christianity in its proper form, compassionate, aiming at real practical benefits in the here and now, and not drifting on about alleged bounty in the hereafter. And where necessary, tough. It is a line the present incumbent of the Papacy might usefully follow, and he may indeed do so

I was referred to a quote from or by Oscar Wilde today. It was as follows:

“There is one thing worse than injustice, and that is justice without her sword in her hand.”

Quite so. Platitudes and solace are no use to people trapped in debt by these companies. Practical help is needed.

The government, meanwhile seems reluctant to act. But then it is reported that Wonga’s owner and founder Adrian Beecroft is a significant donor to the Tory Party.

Many years ago, another able administrator called Thomas Becket was appointed Archbishop of Canterbury by one of England’s greatest, and also most foul tempered Kings, Henry II. Henry thought he would be his tame man in the post. Becket was having none of that, and began to display an independent and disconcertingly  pious approach to the job. The resultant rift was to end with Becket’s brains smeared across the Cathedral floor. One hopes that nothing quite so dramatic and lethal befalls the good Justin. But it is to be hoped he continues such campaigns, and makes the Established Church an institution which can, when necessary, put noses out of joint.

Looking at the history of the new Arch-bish, it is not inconceivable that
the ‘master upstairs’ to whom he reports may not be quite so much God-like as
government-like, for example, via the security services (with whom he had very
close relations in his ‘overseas commercial’ past).
Not the first so-called
‘vicar’ to be held hostage in sensitive areas (e.g Terry Waite, play-acting as
the then Arch-Bish’s representative – or ‘agent’ may be another word) – plus
John Macarthy, alleged global reporter for a hitherto unknown magazine,
etc.
If a government wanted to be seen to be rising to the challenges, what
better starting-point than to have one of your own as the apparent mouthpiece
for the down-trodden, raising the issues to order ?
Remote-control of the
whole show. Mandelson would have been proud.

I am by no means a fan of these ‘pay-day’ companies but I wish the
Archbishop had not gone to the Wonga boss to tell him he proposed to put them
out of business. He got the publicity he sought but may have disturbed a
hornets nest. Both he and his institution are now fair game. It won’t be long
before old skeletons are pulled from the clerical closets, dusted off and held
up to ridicule.

@Ancient & Tattered Airman
That meeting was the bit that baffled
me too. It seemed to give just the oxygen of publicity to that one company,
in a sector where there are several.
http://www.which.co.uk/money/credit-cards-and-loans/guides/payday-loans/payday-loans-how-they-work/

@ It is a line the present incumbent of the Papacy might usefully follow,
and he may indeed do so @

Also on Saturday, the Pope repeated his challenge to fellow Roman Catholic
clerics to take to the streets. In a speech to 1,000 bishops and clerics in
Rio’s cathedral, he said they should go to the favelas – Brazil’s shanty
towns. “We cannot keep ourselves shut up in parishes, in our communities, when
so many people are waiting for the Gospel,” he told the audience.
http://www.bbc.co.uk/news/world-latin-america-23480707

I guess there’s enough of his parishioners on the streets of Brazil
already……..

The Archbishop seems to be a good, intelligent man and a vast improvement
on the last one! I don’t care for pay day lenders but then I don’t have to use
them and I wonder where some desperate people can go? if they can’t get it
from a bank, or don’t save with a credit union are they to be pushed back into
the waiting arms of illegal money lenders who can be a lot more ruthless then
Wonga etc.

I wish the Archbishop well. He seems to be a man of clear thought and
willingness to act. However, I can’t help thinking that if he is to reverse
the falling fortunes (not the monetary ones) of the church, he will need to
address it’s byzantine internal politics. That, I suspect, would try the
patience of many saints.

“…people trapped in debt by these companies…”

Gosh! How do they do this, these fiends? What signs of entrapment should I
watch for?

I am not quite sure the Jesuit pope Francis would quite see that analogy,
with St. Thomas Becket.

Welby is a good man, the church needs good men to stand up and champion,
faith, morality and the right way, to battle against corrupt business
practices, of which the ‘new’ lenders are definitely a proper target for
Welby’s attention.
All strands of the Christian communion, need to go back
to the origins of the church, the church is the people, the shepherd’s primary
focus is the care of his flock, to protect its weakest, only a strong,
determined and sturdy shepherd can do his job well.

@’wonga buys the ears of ministers’ who bought the AYE’S ?