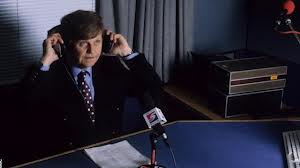 The most poignant news of the week for me was that of the retirement of James Alexander Gordon. Many Raccoonistas have something of an aversion to sport, but Gordon was a man who rose far above mere sport, and became for very many of us, something of a constant, a feature as safe and reassuring as Big Ben or Sailing By, a voice of poetry and an oasis of mellifluous tones that provided a vital and constant part of at least two generations. For those who do not know, let me explain.

As a youngish BBC staff announcer in 1973 Gordon was given the laconic order by a producer to “nip over and do the footie”.  He had, to use his own words, not the faintest idea what the producer was on about. Over at the sports desk Gordon was given a list. It was the afternoon’s football results, and Gordon was totally baffled by what to do with it, all these names and numbers. However, Gordon, who had suffered from very severe polio as a child in Scotland and had a speech problem as well, but had been given a musical training as part of his therapy, and considered that perhaps giving a slight musical intonation and rhythm, might be a good way to read them out.

And so it began, for an almost completely unbroken span of 40 years. Saturday afternoon at 5 pm meant “Sports Report” with its traditional jaunty theme, Out of the Blue, as it still does today.

And then followed the mellifluous, honeyed tones, with their hypnotic rhythm and cadence and a rich hint of Scots that would always tell you in advance how your team or arch enemy had done. A rising, optimistic note for “Arsenal, four” and a gentle, consoling descent for “Aston Villa, nil.”

James Alexander Gordon’s gentle, gentlemanly and slightly old fashioned and educated voice was always there. It has been there for almost all my life. It reminds me of Saturdays as a child, which would begin with two comics – the Beano and The Victor. Then a visit to the model shop to buy an Airfix Spitfire or Panzer Tank, football in the park, followed by wrestling on TV. This was always accompanied by Mr. Kipling cakes. My mother worked on a Saturday, so my father would make what we called “Saturday tea”, a roast of beef, sometimes with roast potatoes, sometimes just bread and butter, a hymn to working class aspiration made good. At five there was the aforementioned Sports Report, and then after James Alexander Gordon and the match reports, it was back to the telly, and hopefully Doctor Who. At least, that is how I remember it.

Later as I got older there was walking back from a match in the freezing air with a transistor radio, awaiting the rival’s results. Or later being abroad in some foreign hell hole, but hearing a little touch of home on the World Service.

Sadly and ironically, after a fight with throat cancer and an operation, the mellifluous voice is no longer strong enough to carry on and he has been forced to retire.  The words “national treasure” and “national institution” are too often used he deserves them. By all accounts he was a total gentleman, a charming and modest man. He was somehow a beacon of civilised, old school values manners, consistency, dedication and diction in a modern world sadly lacking all of these qualities. I don’t want to drag him into political matters, but a world with values, and values despised by many in power today. I salute him and bid him well in his retirement, although reluctant, well earned.

A very nicely written posting that chimed strongly with my own
nostalgia.

1. I rather imagine that JAG, as “… a total gentleman, a charming and
modest man … a beacon of civilised, old school values manners, consistency,
dedication and diction…” (which is certainly how he sounded) would not have
thought it remotely appropriate to launch into some random fit of islamophobia
in a comments thread like this one.
2. As the OP implies, but contrary to
the north London local paper piece cited by Moor Larkin, the mellifluous tones
of JAG were not broadcast in the 1950s (I can remember him appearing from
nowhere as the off-peak newsreader for Radio Two in the nearly 1970s) – that
journo was presumably getting confused by memories of other fine readers of
the football results …
3. … such as the not-that-long-retired Tim Gudgin
and his predecessor Len Martin, both of whom had fine radio voices and both
skilfully employed that musical prefiguring of the result they were
reading.

Did I read not long ago that BBC Religious broadcasting is now controlled
by a muslim ? If so I’m sure we can expect fair-mindedness, balance ,
even-handedness, fair does for all etc.

Quite so. When Bill Bryson returned to the States after his first sojourn
in the UK, he said the two things he missed the most were the shipping
forecast and JAG reading the football results.

Gildas, I’m not a footie person, but I do know exactly what you mean.
There’s a smallish cadre of ‘voices’ who somehow managed to rise above being
mere commentators or sports reporters. Bill McLaren in rugby, Johnners,
Blowers, Christopher Martin-Jenkins and John Arlott in Cricket, ‘Whispering’
Ted Lowe in snooker (“For those of you watching in black and white, the blue
is the one behind the pink.”), Murray Walker in motor racing – they all had a
special something – old world values and a deeply engrained enthusiasm for
their sport, perhaps? – that raised them above mere BBC central casting sports
desk wallahs.

Not forgetting Sid Wadell of course.

Nor Johnners, and wondrous “leg over” incident.

For this feller, TMS is just about the only thing that makes the BBC
worthwhile. The rest of the time, when I do listen to BBC radio (we don’t
have a TV), I wonder who it is they are talking to, and why Thought For
The Day seems now to be exclusively for Muslims. I’m sure that
constitutionally we are a Christian country.

“James Alexander Gordon sadly retires” – do we know for a fact that he
retired in a manner that demonstrated his sadness?

I always thought it was a bit wasteful to employ someone to only read the
footy results. However well he read them.

He still going? Listened to him when I were a lad. Sort of John Peel
effect.

What else did he do for a living?

This article from 2003 is spookily prescient.
http://www.times-series.co.uk/news/393728.print/
One for
the Fortean Times I should say.

Lovely words Gildas. But you might want to edit where it says “James Arthur
Gordon video clip”.