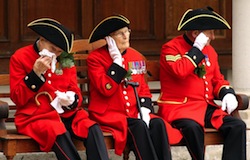 Whether you believe that austerity IS working or not depends on your definition of a desirable outcome. If it was to ensure that the ‘trickle down effect’ relieved poverty amongst the sofa resident young, or poured more money into the Government’s coffers – then it certainly has had startling results.

When the jobs market peaked in April 2008, a record 690,000 pensioners were working. As a result of the subsequent economic slump which resulted in derisory interest rates and negligible returns on annuities, over a million pensioners have thrown out their Zimmer frame, and climbed over the eager bodies of economic migrants – not to mention the prone bodies of the 16-25s wailing that ‘there are no jobs’ – and snapped up those ‘impossible to find’ jobs!

The effect this has had on the over 65s who should have been quietly tending their roses, if only they could afford to, is shown in the figures released by Public Health England this week.

An unexpected additional 600 altruistic pensioners a week have been dutifully popping their clogs, leaving their jobs free for the young, ensuring that their sofa bound younger relatives receive a bounty that will keep them in crisps and Sky subscriptions for a few more years yet, and stuffing their inheritance tax into the Government’s coffers at an exceptional rate. Pensions saved, not to mention relieving the burden on the Health service. And they say the old do nothing for the young! What greater sacrifice can a pensioner make than to lay down his life for his country?

Cumulated deaths per week are averaging around 10,500 which is around six hundred more than would be expected as the cumulated average after six months of the year. Analysts at Public Health England say that the rise in death rates is statistically significant. Every year there are almost half a million deaths and the trend has persisted for more than a year, making it unlikely to be a result of chance. The statistics are unconnected to the more controversial hospital death rates. Those relying on home carers or scared about having to move care homes might have been tipped into crisis. Problems in getting into hospital through A&E and out again to social care have also worsened. But there is no firm evidence for this.

Needless to say, the talking heads are already turning this statistic to their (various) political advantages.

Danny Dorling, Professor of Human Geography at the University of Sheffield, said: “If I was forced to pick I would say that these are the first casualties of austerity. Who is most affected when the social worker under pressure to see more people has only ten minutes rather than 20? It’s the little old lady who doesn’t complain.”

You can always rely on a Fabian statist! The fact that his particular ideology has resulted in a breakdown of family values that mean pensioners are reliant on the State providing a social worker doesn’t get a mention.

He also thinks that it might be uncaring, unthinking pensioners returning from the Eurozone in their droves carrying strange diseases…!

He said that the spike was likely to have several other causes, potentially including pensioners returning from Spain and Greece, a previously unnoticed virus and the psychological uncertainty around care home closures.

Professor John Ashton, president of the Faculty of Public Health, said that the figures could not be explained as a statistical illusion.

“It seems as though it’s real. In 2012 there was a levelling off in the life expectancy of the over-80s. This is a bell going off that’s saying, ‘There’s something going on here and we need to know something about it’.”

It could also be that the elderly have decided to put themselves on their very own Liverpool pathway, despondent at the thought of living in a country where charities are allowed to defame the dead in order to fill their coffers, where the Prime Minster reduces the meaning of marriage to ‘whom I wish to shag’, where their care worker turns up on their doorstep and announces that in future they are to call him Sheila, and the government spends more money killing Iraqis than it does on keeping pensioners warm.

Can you imagine the outcry if it was discovered that 600 dogs were dying unexpectedly every week? Front page of the Daily Mail for a start.

600 pensioners – and not a word in the tabloids!

All good fun.
Always been a bit sceptical about the interpretation of
stats relating to people and their various activities.
We aren’t really as
predictable as widgets and the machines that make them.
Instead of looking
at what current influences might be affecting exit rates, why not look at what
was happening to those people during their early years and what the potential
consequences might have been for long term health and survival? E.g. 1920s and
1930s. Or perhaps the cumulative effects of a lifetime of such events.
Just
a thought.

Personally if I can no longer look after myself I will be happy to check
out. Who wants to be neglected in a hospital or residential home just waiting
to die while our government takes everything you have worked all your life
for?

It occurred to me that more pensioners are dying because they’re working
too hard to keep the lazy gits who sit on the sofa all day.

@charlotte
I think that was Anna’s original theory before I invoked
Climate Theory…….. :-}

We need a longer run of statistics (famous last words).
When it gets
colder – or warmer – more people will die than if it doesn’t, surely?
What
are the comparative figures over say 20 or 50 years, showing the comparative
temperature variations ?

“JimS … “The concept of percentages is clearly lost on these numpties”.

Quite the opposite. Mr Armstrong is fully aware of the difference between
percentages and absolute numbers. He is making the point that, although the
number of child casualties has fallen, they still constitute a
disproportionately high proportion of all casualties.

Considering the proportion of the population that are children, 34% seems
a quite reasonable figure.

One would assume that the older we are the more road aware we are and
also we can be expected to have a better sense of our own mortality. Given
that, it isn’t unreasonable if 100% of casualties are children, after all
adults should have more sense.

“… it isn’t unreasonable if 100% of casualties are children …”
So
are you saying that it would be reasonable to expect 0% casualties amongst
older pedestrians?

@ So are you saying that it would be reasonable to expect 0%
casualties amongst older pedestrians? @

Given that nobody under about 55 walks anywhere, this is probably
wholly unrealistic……….

Meanwhile the children in Wales are dropping like flies:

But Tony Armstrong from the charity Living Streets said although there
had been big drop in casualties, there was a danger of complacency.

“The significant reduction in the number of pedestrians killed or seriously
injured in Wales is most welcome, but children are still accounting for over a
third (34%) of all pedestrian casualties,” he said. BBC
Wales

The concept of percentages is clearly lost on these numpties.

Does this mean survivors can look forward to a reduction in their Life
Assurance premiums?

Or, can shareholders in Life Assurance companies expect greater
dividends?

Since 2009? Ah yes, we’ve had three bad winters after a run of very mild
winters. And a crap energy policy that makes heating your house more
expensive.

That was my immediate thought too. The fact that we didn’t have any
summer at all last year might be a factor, too.

I’ll bet the figures for 2013 (when they are finally correlated) show the
trend stabilising again.

The elderly are certainly more prone to influenza, bronchitis and
pneumonia in poorly heated homes, and these illnesses are demonstrably more
serious and often fatal for the elderly if treatment is delayed.

Can we say this clearly-IT IS GOVERNMENT POLICY TO KILL OFF THE ELDERLY,
THEY ARE CLASSIFIED AS NON-CONTRIBUTORY MEMBERS OF SOCIETY, A COST TO
GOVERNMENT- yes I was shouting.

Do not make the mistake of getting old in England, you will treated worse
than trash (left at the roadside to rot and decay). This is camorons (and
liebours befor him) policy while he subsidizes his wifes family and prince
charles-spit.

I think they’re trying to blame it on Global Warming……………

“”Our previous studies have shown that as temperatures rise above a certain
threshold, the risk of death increases. Using the same model, we estimate that
the current heatwave has caused the premature deaths of 650 people. The excess
is likely to have been overwhelmingly among the elderly, especially those over
75.”
http://www.express.co.uk/news/uk/415968/95F-and-it-s-going-to-get-hotter-No-end-in-sight-for-heatwave

Do you remember how we used to laugh at the “bread queues” outside Moscow’s
Gum Stores Anna?

The statistics that you publish, along with the apocryphal stories about
Nazi style social welfare officers removing children from their parents… (see
Christopher Booker)… And the continuing stories about the overload of the NHS
(particularly A&E), remind me very much of the elephant sitting in the
room, that the Soviet government and our (so-called) democratic government
chose/choose to ignore…

Namely that a deeply communist system leads to a command economy, which is
excellent for measuring and then tailoring to fit, according to whatever
parameters are currently fashionable amongst those that run the bureaucracy,
but absolutely useless for fulfilling its designed purpose.

In a demand system, if new spaces in A&E are needed (regardless of how
it is funded), there will be people ready to commit to the enterprise. If it
is the case that some of these and pre-existing facilities are badly managed,
dirty and/or otherwise cause unnecessary death, people will stop using them
and they will be bankrupted or taken over by someone more interested or
capable.

Similarly for the social welfare, which needs to be far less intrusive, the
current game from our communist/communitarian bureaucracy seems to be that if
parents do not fit the standard acceptable social climate, their children will
almost certainly be observed and likely removed… This can be anything from
supporting the wrong political party, or being black or from eastern
Europe.