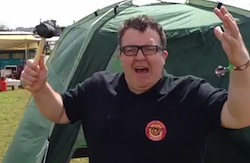 There he was at Glastonbury, not a mirror in sight, snapping his fingers and striking the âattitudeâ, quite convinced that he was still an idealistic 18-year-old. The charismatic rhetorical odes to Labourâs principle still capable of rousing the working man to banner waving indolence over a charcoal burner at his behest, when he came face to face with The Rolling Stones.

Then the first Ohrwurm struck. Hey! You! Get Off of my Shroud! it sung to him, over and over again. Thatâs the trouble with âearwormsâ, the closest translation for the German Ohrwurm; once they start to promenade round the cochlea, you can no longer hear the voice of reason, of principle, or anything in between.

The hierarchy of the Labour Party he knew and loved, the inner sanctum he revelled in, was as grey and wrinkled, as potbellied and knock kneed, as a Rolling Stone. It was on its final journey to the mortuary; bedevilled by debt, in hock to the Co-operative loan sharks; bullied and abused by its âcarersâ â UNITE; no longer able to live an independent and self-principled life.

Hey! You! Get Off of my Shroud! sang the once proud voice of the Labour Party to him. And he has.

Tom is a great fan of the songwriter Danny Coughlan, that permanently heartbroken crooner of unrequited love and doomed romance. He played his âCrybabyâ as he walked away from the Stones geriatric catwalk of embarrassment. âThis Time Itâs Overâ croaked Danny to him, over and over again. Tom says this tune has âbeen on a loop in my head for months now â always the mark of a great tuneâ â and a sign of serious earworm infectionâ¦

He went to Glastonburyâs own husting in Billy Braggâs âLeftfieldâ, to debate with Owen Jones. Hardly a cure for melancholia, but each to his own. It should have been a raucous affair, packed to the rafters with the idealistic young; instead there were a desultory 300 there â Glastonbury these days is an aria to lost youth, the province of middle aged men in unwisely taut denim puffing on their first reefer since they went to Pink Floydâs farewell concert. The audience were hard line left activists. They cheered Owen Jones messianic call to tax the bankers, rip off the rich â barely murmuring dissent to Tomâs more reasoned argument. They were indifferent to him,  far more hurtful and depressing than rabid disagreement.

As Mick Taylor deftly guided the confused Keith Richards from wandering off stage mid-number, so Tomâs friend guided him back to his deck chair. Deck chair Tom? Oh dear! but when arthritis strikes the knees, the muddy ground is best avoided â and after several pints of pot belly fuel, he brooded, and brooded, and brooded.

Where was the fire, the passion, the belief of his youth?

Itâs been missing from the Labour Party since Tony Blair marched us into the arid desert of pragmatism that was so electorally successful. Itâs belief. Belief in ourselves. Belief in the great cause of social progress. The marketing men, the spin people and the special advisers: theyâve won.

Thus he wrote – and a few hours later he resigned.

Just gone through the coverage in the Daily Mail of the Falkirk debacle.
They seem to make almost nothing of Tom Watsonâs âinvolvementâ. Naturally,
theyâre gunning for Milliband and McCluskey plus the latterâs alleged
âfriendshipâ with Karie Murphy. But when you consider the bloke who was
heading up the âelection strategyâ has, as his office manager, the woman who
now seems at the centre of an alleged selection gerry-mander, he seems to be
getting off very lightly.

I cannot imagine how â given his pre-eminence during Leveson â but has
Watson got special friends somehow amongst the press barons?

Booya with a cherry on topâ¦

Take it you were a screaming Beatles fan thenâ¦.

Tom, you forgot the sickle in your little video cameo. No wonder the
liebour yoof cannot relate to you.

His description of the festival sounds dreadful, billy bragg in leftfield!
a litany of c-listers, the only thing missing was a commemoration of the NHS,
this time with pensioners writhing in their beds reaching for the flower
displays for water. No wonder he quit the shadow cabinet, though quitting as
an MP which might be a real service to the country was declined, that gig is
far too lucrative.

Quitting as an MP?

To quote the original inspiration for the Watson Look (and I donât mean
Elvis Costello): âThatâll be the day!â
Fat Bastard may be a lot of
things, but I never had him as one for a âdeserter from dessertââ the cheap
food and beverage at Westminster, combined with a salary for showing up in
the Chamber whenever he feels like it, only for doing one of his drama
queeny performances (which will continue, Iâm sureâ that was probably part
of the deal that got him to step down so fast!)
Come to that, unless
theyâre forced to do so, I donât see any MPâs giving up all the perks.

Tom Watson will be outta there when the people of West Brom tell him âYou
go your way and Iâll go mine/Now and forever till the end of timeââ and he
wonât matter anymore.

That tent of Tom Watsonâs in the photo (no, not his T shirt) looks quite
new. Was it perhaps purchased out of MP expenses under a third home
allowance?

I thought Watson WAS a spin person (when he isnât being a festering pustule
on the body politic). The only reason his machinations are not resulting in
massive poll leads is because, deep down, the majority of the British
population are now very chary of excessive State control, cautious about
tax-borrow-and-spend governments, quite enjoy freedom of speech and therefore
have misgivings about the excesses of Murdoch-bashing, are growing weary of
unaccountable control from Brussels commissars, donât like unions throwing
their weight about (look what happened the last time they did that), and
rather enjoy just being left alone to get on with life in peace. It probably
hasnât occurred to Watson yet, but âsocietyâ is sick and tired of being told
what to do (and what not to do), and being royally ripped off by the tax
system for the privelidge of being so lectured. They donât, in general, think
Milibland Minor is up to much as a leader, either; not that the alternatives
are that much better, but in choice between an Eton toff and a cross between
Foot and Kinnock, even the toff holds the aces.

Watson would be better off taking a leaf out of his old mate Charlie
Whelanâs book, and shuffling off to breed trout in the Scottish borders. That
would be far more useful to society.

As is almost invariable when you write Anna âmemorably humorous peppered
with the odd phrase that enters my personal Pantheon of wit âand future
plagiarism ââPot Belly Fuelâ âjust too understandable to someone such as
me.

Being adequately into my 60s (but not yet retired) I do wonder at the
number of middle-aged attendees at various festivals around the country.
I
was no stranger to outdoor music & living (and loving) but that was all
some 35 â 45 years agoâ¦
Nowadays my preference is for either a nice session
in a convivial hostelry**, or a good sofa, a decent screen and a good sound
system to totally relax with, prior to toddling off to a comfy bed after a
nice mug of cocoa.

I really canât see the point of trying to prove youâre still young, hip and
totally where itâs at â when itâs so painfully obvious that you are none of
them!

Fantastic piece â as Pogo says, the thought of Tom Watson, Owen Jones and
Billy Bragg all being is the same tent is really dreadful â unless you had a
can of petrol and a box of matches.

Billy Bragg and Owen Jones in debateâ¦ Thatâd be an hour or so at
right-angles to reality then.

I think that may be what vodka and serious class A drugs were invented
for! Go to Glastonbury, pay Â£200 nicker to watch those 2 sad fucks, well,
jeez, itâs a form of expensive self harm!

Mind if I use the phrase from time to time?

2009
Watson set up a pressure group this morning â Gamersâ Voice â to
represent gamers in the UK, which already has over 400 members.
http://www.gamesindustry.biz/articles/watson-defends-games-industry-in-commons-debate

2013
Mr Watson said he wanted to speak out as a backbench MP on issues
of interest to him, such asâ¦â¦â¦ scandals over child abuseâ¦â¦..
http://www.telegraph.co.uk/news/politics/labour/10160201/Tom-Watson-resigns-as-Labour-election-chief-amid-candidates-row.html

Marvellous stuff. One would need a heart of stone not to piss oneself
laughing at their travails.

What a great piece of writing, Anna!