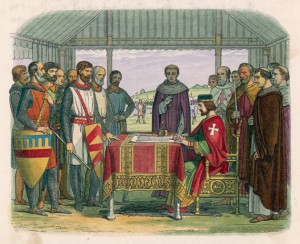 798 years ago today, King John set his seal on the Magna Carta. The contents of that historic document had been bitterly argued over for four days. During those days, as the Barons struggled to wrest the absolute power of a monarch from his grasp and extract the concessions that we refer to today as ‘the rule of law’, the King rested in his hunting lodge, journeying each day to the Runnymede meadows via a specially constructed underground tunnel.

The King was unwilling to be stripped of his sovereign right to chop off your head merely because he thought your eyes were too close together. He needed no permission to prosecute a citizen. It was the Barons who wished to see that sovereign right balanced by rights accorded to the accused:”No free man shall be seized, or imprisoned, or disseised, or outlawed, or exiled or injured in any way, nor will we enter on him or send against him except by the lawful judgment of his peers, or by the law of the land.”

They wanted the protection that we enjoy today – that of being ‘innocent until proven guilty’ in a court of law. They wanted potential accusers to stand in public and state their case, not whisper in the King’s ear. They wanted the opportunity to refute allegations of wrong doing, and to have the two versions adjudicated by the calm and “lawful judgment of his peers”, not decided by the King and his friends.

In short, that part of the Magna Carta was centred on the rights of the accused. We are in danger of losing those historic rights as our Justice system, which now oversees the power of the Crown to punish citizens, is ever nudged in the direction of achieving a ‘social justice’ on behalf of the victim.

We no longer demand that accusers always ‘stand in public’ and state their case. We allow ‘vulnerable victims’ to remain in the shadows, behind a curtain or via video link. We don’t demand that their accusations are backed by solid evidence, or rather we consider that solid evidence consists of two or more victim’s alleging the same offence has occurred. We don’t demand that the victim is particularly specific in their allegation; we take into account the distress caused to them, the length of time since the offence occurred, and say ‘roughly’ will do.

We say that even if the Crown doesn’t think it possesses sufficient evidence to prosecute, or continue a case, that the ‘victim’ should have the right to review that decision. We encourage the victim to make a statement to the court telling of how much distress the offence has caused them – and that this is taken into account in the ultimate sentence.

We even say that if a man has been acquitted of an offence, the ‘victim’s rights’ demand that he can be prosecuted a second time – so the accused can never have absolute finality in the matter.

Our Justice system is no longer centred on curtailing the power of the Crown to ‘injure in any way’ the ordinary citizen, but to deliver an outcome which is acceptable to the emotional and distressed victim, or those who cry out on his behalf.

Many of these changes have been wrought or are proposed in response to the current exceptional spotlight which is being shone on the emotive subject of child abuse. The subject has largely achieved public prominence in the wake of the ‘Savile’ revelations of alleged wide-spread child abuse by the entertainer. The flood of allegations came in the wake of the ‘Exposure’ television programme which reported on the claims of abuse at Savile’s hand-made by a small group of girls from an approved school in Surrey.

The underground tunnel to Runnymede has long been blocked up, though the entrance is still visible. The great Hall where King John dined with his advisors, mulling over the demands for the rights of the accused, a staff meeting room. The chamber where he no doubt tossed and turned in his sleep, now a bedroom in a luxury flat. But Duncroft Hall, King John’s hunting lodge, still exists; it became Duncroft Approved School.

Perhaps it should be a national monument, the place where justice for the accused started – and finished. Happy Birthday to the Magna Carta. 798 years old today – what remains of it.

Ironically, Charles I sought to overthrow habeas by imprisoning 5 barons, denying them due process. Members of Parliament, one of them my ancestor Sir John Glanville, created the Bill of Right and took their concerns to Charles. Sir John wound up in the Tower, courtesy of the Lord Protector, for his support of Charles, but was ultimately freed. And Charles had his head cut off. About 400 years thereafter, I wound up at Duncroft. You can’t make this stuff up! http://en.wikipedia.org/wiki/John_Glanville

They call this civilization ! Sometimes I am glad to be getting old but heaven knows what it will be like for my grandchildren.