In fact, I come across men seeking partners for sex in these woods more and more often. It used to be a well-known spot among men cruising for gay sexâ¦

So I cautiously assume that Melissa Kite has no objection to stumbling across two gay men having sex. Surely she would have changed her dog walking venue by now if she did have?

But today is different. Today is different, because shock, horror, Melissa thinks she has discovered the awful truth that some men persist in looking for opportunities to have heterosexual sex. She knows this, because as she and her dog were walking through this well known open air gay sex arena, a man shouted out behind the disappearing figures of Melissa and her faithful companion Cydney â âNice legsâ! 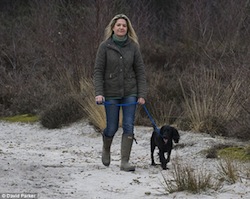 But Melissa isnât a Daily Mail journalist for nothing. She told Cydney not to be so stupid. Obviously this was a potential two page example of how she, Melissa Kite, owner of a mere two stumpy furry legs, was being hassled for sex. Whoa! This is not the sort of deviant behaviour you expect to come across when you walk your dog in a well known gay cruising area. Something must be done. Lessons must be learnt.

Well, Melissa rushed home, phoned her editor, said âIâve got a hot storyâ, and then phoned the policeâ¦

She asked them to look out for a man in his 40s, short and balding with a pot bellyâ¦

They said they might send an officer âif they had one spareâ â but Melissa had âlittle expectationâ of this happening. I donât know why, because last time this particular car park cropped up in the Daily Mail, they were nearly hysterical at finding that Police were indeed sending officers down there â and the officers were armed, not with Taser guns, but with a Â£120 budget to provide tea and coffee to the gay cruisers they met thereâ¦.

Melissa seems to have a bit of a thing about watching gay men â her book, which was liberally promoted in the Daily Wail, âOne Womanâs Guide to Love, Men and Other Everyday Disastersâ memorably described how:

When her friends seat her next to a splendidly eligible man at dinner, she blanks the poor chap and spends the whole evening talking to a dazzlingly good-looking (but gay) food writer.

Perhaps we should not be surprised that in our increasingly inclusive, anything-goes society, there is very little censorship of open-air sex acts. The Sexual Offences Act 2003 outlaws flashing and sex in public toilets â but sex behind a tree is not illegal, per se.

I wondered what the point of this 1,500 or so words (around Â£3,000 worth, or have rates gone up?) until I came to the end paragraph â âMeanwhile, tonightâs Channel 4 documentary about âthis intriguing and unusualâ pastime will doubtless appeal to viewers who pride themselves on being non-judgmentalâ.

Fabulous Limericks as usual from Mudplugger, Gloria and Moor Larkinâ¦â¦. and
lets face it, this journo is simply crying out for it!

Someone once pointed out a secluded area that was used for âdoggingâ. We
were in a car with the radio on, it was around 11.30pm. There were lots of
people about and cars parked as we drove past. I must have mis- heard and said
âItâs rather late to walk a dog isnât it?â

How did she know he was talking to her and not someone else when he called
out âNice legs!â How could she know if he was some distance away?

Kiteâs usually pretty good in the Speccie. Iâm unfamiliar with her Mail
stuff with the exception of this article which I checked â and the force of it
is rather different from your selective quotes.

OK Anna, you donât like the woman, but youâre spinning the thing very far
from her points (and very far from the unpleasant experience she reported,
which wasnât just a cheery-chappieâs ânice legsâ).

Do you really think that the local residents (whom I suspect include Kite)
should be unable to walk, ride or send their kids out without this stuff? Knee
deep in discarded condoms? Sure thereâs a hilarious limerick there, whichâll
make the thing OK yeah? God help us.

This area was in the news several years ago. I canât immediately find a
UK reference, but it made the NYT.

There was a programme about âDoggingâ on Channel 4 this week. i didnt watch
it. However my Twitter time line went absolutely bonkers! I wonder what this
says about me, or the people I follow, or the British!?

Anna- I live locally â and think this ISNâT about mature ladies being
harassed by pot-bellied ( and possibly gay) men Itâs about âWonât anyone THINK
OF THE KIDDIES? â
\\Concerns include that fact the site is so close to the
local school, and the campaign for closure is supported by Anne Milton, the
Conservative MP for Guildford and Tony Rooth, leader of Guildford Borough
Council. \\
http://news.bbc.co.uk/local/surrey/hi/people_and_places/newsid_8904000/8904496.stm

Not only that, Mjolinir â he lives in that exact areaâ¦..!

I am all in favour of al fresco sex as long as it doesnât frighten the
wildlife â DM journos.

The dog said to the journo
Is he talkinâ to you?
How charmingly sweet
he calls
But the journo she said
Iâm alarmed not so calmed
So take me
away, please Dog

So the dog and journo ran to the cops
And said thereâs a man who
sings
In the woods in the snow
And he frightens the girls
Yes he
does, and heâs fat you know

And the man making the pass
Was found terribly crass
And so bars are
now his ugly fate
So the moral of this tale is that
If you chase
tail
Then the tail may well put you in jail.

If youâve prize-winning puppies, then show
Them off in the rain and the
snow:
Get them out in the park
Before it gets dark
Because exercise
might help them grow.

Itâs something thatâs quite hard to bear,
When giving your puppies some
air,
That some twit should beg
For a show of a leg,
Ignoring your
âBest in Showâ pair!

Ms Kite is a dog-walking hussy,
Whose habits are really quite
fussy.
If the weatherâs too grim,
Sheâll just stay in and trim
Any
stray hairs she finds on her pussy.

XX Melissa Kite, well known Daily Mail journalist, is in the habit of of
taking her dog for a daily walk in a well known âgayâ cruising area.XX

Soâ¦. she has a gay dog. Should we worry?

Is there supposed to be any subliminal message in the lovely Melissaâs
choice of canine companion; a Cocker Spaniel?

I canât help but think that if I was walking my dog and some woman called
out ânice bumâ and I responded positively in the belief that she was hassling
me for sex, it would be me that was nicked for sexual aggression.

While walking her dog in the park
Melissa Kite heard a remark.
âNice
legs!â was uttered,
But whose? she muttered.
Perhaps it was just getting
dark.

There was a young doggy called Cydney
Whose owner thought her quite
pretty.
One day in park,
a fat man remarked
Oi Cydney, you fancy some
nookie?.

Itâs not my best effort but with a bit of luck the professional limerick
folks will jump in!

ââ¦â¦a man shouted out behind the disappearing figures of Melissa and her
faithful companion Cydney â âNice legsâ!â

I agree itâs an overegged bit of writing but dogging and nasty dogs are not
confined to Wisley Common. Until last year I lived in a cluster of homes in a
bluebell wood on the edge of one of Surreyâs market towns, about a mile down a
track from the main road on which there are two parking areas. I have two
teenaged daughters whose selfsufficiency has been encouraged by a distinct
lack of cottonwooling from parents. The girls were harassed to such an extent
by dogs and doggers, in broad daylight, persuaded us that they best be given a
ride to the road.

Cydney (sic) is a bitch.

She might still be waiting for her copper ! As of mid day today 26 man
hours have been used âlooking outâ for a âman in his forties, short and
balding with a pot bellyâ !

There was another story elsewhere in the media about the huge rise in dog
bites and the extent to which gang members etc. use and trade in the more
ferocious breeds of dogs. In the last decade, we who walk here and there, have
noticed a distinct shift from the former favoured breeds to those clearly of
fighting, hunting and guard dogs. In our local nature reserve, long since
cleared of ânatureâ by the unleashed dogs of this kind and all the feral cats
from the neighbouring estate, it is a real problem. Given the choice if the
âdog walkersâ were cleared out and the sex visitors permitted we might begin
to see the return of other species, notably the birds and the bees.

âa man shouted out behind the disappearing figures of Melissa and her
faithful companion Cydney â âNice legsâ!â

Is that all he done?

Nice legs? If the picture is accurate, the writerâs were covered so it must
have been the dog he was referring to.