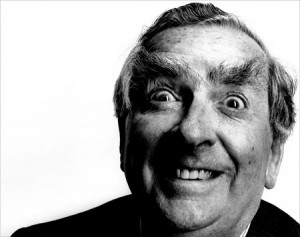 Abu Mustaffa-Tax Denis Healey, the infamous hate preacher was universally condemned last night by leaders of all sensible parties. 95 year old Abu Denis Healey has been accused of delivering foul tirades against poor Ed Miliband and, even worse, of stating how he fancied making Margaret Thatcher one of his wives.

David Cameron, leader of the Lib-Lab-Con party, made a key speech in parliament yesterday promising unequivocally to have Abu Denis Healey deported, if possible, maybe next week. He went on “I feel very strongly as a passionate liberal that this sort of language is quite uncalled for in our modern 21st century, passionately liberal and proudly wishy-washy, metrosexual Britain. People with independent opinions like that make us all feel quite sick. It has to stop and it has to stop now!”

Cleggie simpered “I feel quite hurt he didn’t insult me, I think I’ll go and open another baby care centre in Bromsgrove.”. Nigel Farage, UKIP leader said “Denis is bang out of order with this uncontrolled ranting, that’s my job. Who’s gonna watch my Youtube speeches now!”

Cameron went on to say “I give you a cast iron promise that this enemy of liberty will be summarily put under house arrest without due legal process, he will be harassed and snooped on by hundreds of staff from the security services without any court order and he will be arrested on spurious charges that won’t hold for 5 minutes. This gives a clear message to freedom haters like this everywhere that we are proud to protect of our liberal values of selective fairness and justice.”

Abu Denis Healey’s main victim, the hapless Ed Miliband who was once a winner of the Mr Wimpiverse contest and appeared in nasal hair spray and Mr Sheen polish adverts before becoming an unrecognised politician, said “This kind of spittle-ridden, left-wing tub thumping is out of character for our party, his vile words shame the good memories of wise and eloquent orators such as George Galloway, Ed Balls, Denis Skinner and John Prescott.”

Debt Bomb Terrorism
Abu Denis Healey is reputed to have been Osama brown-Gordon’s predecessor as the holder of finances for the notorious terrorist death cult, N’hu l’abour. Victims of his terrorist atrocities in the 1970s recall with horror how he made their “pips squeak”.

In a famous televised speech made by Abu Denis Healey in the 1970s, he claimed to have ended boom and bust, sorry, he claimed the pound in his pocket wasn’t worth a fly’s fart or something like that. Anyway, what followed showed an uncanny similarity to Osama brown-Gordon’s infamous terrorist debt bombs that were indiscriminately unleashed on Britain in the 2000s.

One of Denis Healey’s greatest terror acts was his budget of 1974 that saw the destruction of 83% of people’s earnings. Over the next years the accumulated destruction from Dennis Healey’s inflationary explosions was so great that the International Monetary Fund had to send in rescue forces to bale out a humiliated Britain in 1976. And this of course later led on to the Winter of Discontent in 1979.

Zimmer-framists Threat
Abu Denis Healey is also considered by many to be Osama brown-Gordon’s ambassador to the secretive zimmer-framist communities in Britain. Some fear that the segregationist attitudes of the zimmer-framed causes friction in society.

Many selfless staff in the public sector fight tirelessly to protect us from the untold harm that the zimmer-framists could unleash on us. Hard-working professionals in the NHS bravely kill zimmer-framists off in the thousands by ignoring them in hospital and refusing to give them food and water. These noble goldplated-pensioned NHS managers also devise ingenious weapons of mass destruction such as the Liverpool Care Pathway to obliterate their enemies.

Other brave workers from the civil service and from the green political arena, and it has to be said greatly enhanced by Miliband’s loony Climate Change Act, have cunningly increased the price of energy by so much green taxes during these record-breaking cold spells that thousands more of the zimmer-framists are being killed off because of energy poverty.

Living in his multi-million pound terrorist training ranch in Sussex, paid for by taxpayers from his dubious MP benefits, Abu Denis Healey can often be seen in his front garden shaking his walking stick at passers by and spouting foam-flecked abuse at innocent politicians of all three genders.

I wonder when ‘Abu’ will be deported to America to have his eyebrows shaved
off? I seem to vaguely recall the seventies…Yuk, yuk and thrice yuk. Lights
off anyone? Just as the latest baby is about to arrive. Rubbish…what
rubbish….oh that stinking heap over near the town hall! Gadzooks the lights
have gone out yet again. NOW YOU KNOW WHY THE FRAGRANT MAGGIE GOT TO BE PM.
Every time labour get their their bums in No 10 we go to the dogs. Now,
whichever non charismatic rubbish politician is in No 10, we are well and
truly stuffed with decisions that cause terrible hassle for ordinary man.

May I request a treatise on Mr Wimpiverse’s climate control act? He got off
too lightly in this edition of “working-class heroes”.

Leave Healey alone! He was dangerous 35 years ago, but he’s just an old man
with memories now. Be charitable to the doddery old fool – it’s the Christian
thing to do, especially at this time of year.

That is an interesting choice of photograph, but the one which actually
accompanies the Daily Mail version is shocking. He looks like a cadaver or one
of those waxworks that you struggle to recognise.

My word! Are we supposed to recognise waxwork figures? We should be
told!

These Vogons. First, the murder of poetry. Now, the desecration of
satire

I don’t want to sound like a conspiracy theorist, but there are still those
who believe that Healey may have had something to do with the Yorkshire Ripper
murders, several of whose victims were found in his constituency. Healey
notoriously said of Thatcher: “I am going to squeeze the bitch until the
squeaks stop.”

Didn’t Cameron append an extra caveat to his promising unequivocally to
have Abu Denis Healey deported?

Along the lines of “…..so long as we re-elect Cameron, so long as he has
renegotiated our treaty with Europe, and that will be enshrined in draft
legislation – which is not binding on an incoming politician of any hue.”*

*As plagiarised from an earlier observation of Ms Raccoon.