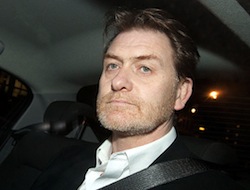 Who says Community Service doesnât work? Why for a whole year Eric Joyce, the charming Scottish MP for Falkirk, stayed out of trouble after being fined Â£3,000 and ordered to pay his victims Â£1,400 in compensation following a drunken brawl in the House of Commons Bar. Joyce admitted getting âhammeredâ in 2012 and swinging punches at four Tory MPs. It took eight police officers to get him out of the bar into a police van, leaving a trail of broken windows and bloody noses behind him.

It hasnât happened again for an entire year. Until last nightâ¦

Last night it took twelve police officers to get him out of the House of Commons bar and into a police van. Is Eric getting drunker these days or are the boys in blue getting weaker?

This time he became overwrought at a Karaoke party in the House. Who knew that this was how our politicians spent their time â screeching âI will surviveâ into a crackley microphone? The evening ended with Eric in an undignified rugby scrum on the floor as Eric attempted to put a policeman in a headlockâ¦.

Eric is yet another MP suspended from the Labour party â even they have some standards. Incidentally, since Eric was accused of inappropriate sexual behaviour with a âchildâ â why areât the main stream media producing photographs of him with bulging eyes this morning and claiming âPaedophile Joyce arrested againâ. An accusation is all it takes isnât it? Ah, but Eric is still alive. Silly me.

On the subject of disgraceful ex-Labour MPs, (a crowded field) I am indebted to my commentator âBrianâ who gave me a link to a fuller article on Phillipa Curtis. It seems that Ms Curtis had also stopped texting âjust minutesâ before the accident which resulted in the death of Tori McBryde. Now the fact that Nazir Ahmed was shown to have stopped texting just two minutes before the accident which killed Martin Gombar was the very point which got Vera Baird, then Solicitor-General, so agitated she lowered her august self to the level of this humble blogger to publicly tick me off for comparing the two cases. Iâm fast coming to the conclusion that Nazir Ahmed has a point, there may very well have been a conspiracy involved in his sentencing – just not a Jewish one. Two deaths, two motorists doing 70 miles an hour, two motorists texting up to minutes before a fatal accident â one has the Solicitor-General intervening to ask for a 21 month sentence to be increased, one has the same Solicitor-General intervening to say that, in effect, 16 days was perfectly reasonable, âquite different casesâ.

The only difference I can spot is that the CPS made different decisions on charging â I would like to know why? Random event or Conspiracy? Surely the fact that Nazir Ahmed was a friend of Vera Bairdâs couldnât account for the difference?

All I can think of is Barbara Windsor, snarling â as she shouts,
âYOUâRE
BARRED!!! GERR-OUTTA MY PAB!!!!

Somebody should have told Joyce: âDonât do it, Eric, he ainât werf
it!â
Not that he would have listened, mind, but you never knowâ¦

Wotâs all the fuss abart? E sarnds like a good bloke to me, beatin up
all them tossers in some poxy bar for toffs.

A minute after I hit âsendâ Iâm generally still handling the phone. On
another tack, the report just out on violent offences amongst ex-servicemen
does seem well timed.

Perhaps ex-servicemen are more likely to commit violent offences for two
simple reasons:
1 they have an above average liking for violence just as
gays are disproportionately represented in the fashion industry;
2 they
are trained to be more violent as that is number one on the infantry job
description.

Just as the armed forces now âdecompressâ soldiers in Cyprus after a tour
in Afghanistan, more emphasis ought to be placed on retraining as a civilian
prior to leaving.

Iâm not aware of any evidence that WWII conscripts demonstrated any
similar level of post-service violence after the war ended.
This leads
to the view that the recently reported tendency relates more to the basic
nature of the current voluntary recruits â when soldiers are conscripted
across the wider populace, the normal proportions of naturally violent
types occur (i.e. not many), but when only recruited from the willing
âpaid volunteersâ, a greater propensity to violence is evidenced.
When
considering the substantially higher levels of direct human suffering,
violence, injury and death encountered by WWII conscripts over longer
service periods in active conflict-zones, they would have had a far better
excuse for any post-conflict behaviours than the modern, more cossetted
volunteer army, yet the reverse seems to be the case.
I looks like this
has far more to do with nature than nurture.

Actually, there is a school of thought that says that delays in
bringing back soldiers from Germany immediately after the hostilities
ended, due to the necessity of setting up an orderly system of running
things in Germany, and the logistics involved in bringing them back, and
the dislocations it would have caused inside the UK had hundreds of
thousands of men descended all at once, caused them to âdecompressâ in
place. After weeks of boredom, and having been able to shake off the
hypervigilant state in the location where it was contracted, i.e., they
were calmed down around their former enemies and assured there was no
personal threat to themselves, the returning soldiers were only too glad
to come home, with a better state of mind than had they just been plucked
up and sent back without having resolved a lot of what may have been
preying on them. Being around others who were doing the same made only for
even more of a longing for home that filled their mind, rather than
worrying about who and what it was they were leaving behind, a common
complaint of modern soldiers.

Sorry. It all stinks to me. They were both guilty of using their mobile
phones during their respective journeyâs, and they both killed someone. Just
when they stopped using their phones all seems rather irrelevant, especially
to the dead. Both acts that they both committed are crimes of equal
nature.
But then this isnât about that.

Off topic but I thought Gildas might be interested in this snippet of Black
Death news (comments are closed on his brilliant articles):

In an ideal world the standard of proof for politicians faced with criminal
charges would be reduced to âhe looks guiltyâ to save court costs (the number
of convictions wouldnât be much affected). However, after reading around the
topic, Ahmedâs case indeed showed a break in the chain of causation: he had
been using his mobile phone earlier, ie dangerous driving, but that use was
not proved to be a cause of the death of Mr Gombar. If he had not collided
with Mr Gombar on the M1, nobody outside the Jaguar would have been any the
wiser about Ahmedâs earlier lawbreaking. Just as my wise old Prof told us
once, the criminal law only applies if youâre caught. As for Ms Curtis, not
spotting a car with hazard warning lights flashing in an eight second window
of opportunity is dangerous driving, ie well below that expected of a
competent etc driver, and the collision was a cause of Ms McBrydeâs death,
hence death by dangerous driving. Not even her very competent brief was able
to get her off.

It genuinely saddens me to think that Vera Baird could have been right for
once, but I draw succour that, as a government minister, she would have been
told by her civil servants what to say.

Changing the topic entirely, why havenât we heard any male politicians in
positions of influence alleging that certain eager beavers were not averse to
offering their sexual favours in return for a leg up the greasy political
pole? Donât pretend that women are too high-minded and genteel to think of
such things, the famously course outburst of Claire Perry MP in a Commons Tea
Room about what she might have to do to attract Mr Squeakerâs eye, shows that
women are just as capable.

We must keep dear Eric in Parliament. If he loses his seat he will have to
pay the full price for his booze and will bankrupt himself â very unfair.

Iâm sorry it has to be you, but somebody has to call the scum out.

Thanks and have a good weekend.

Just as point of information, I assume you spotted Dame Veraâs contribution
to the recent Lord Rennard debate

When I first heard about the allegations against Lord Rennard, I was not
surprised. Not because I had any information about him specifically â I knew
him only as a master strategist and former Lib Dem party chief executive â but
because there is a culture of women being patronised in politics, and men in
positions of power using that position to get sexual favours.
http://www.guardian.co.uk/politics/2013/feb/25/lord-rennard-allegations-vera-baird

Can anyone ever imagine a man in a position of power using it to get
sexual favours from our Vera?!?

Yes, if heâs a Masochist.

Heâd be wasting his time â however, a woman mightâ¦!

Oh Dear. Vive la Belle France. Not that any woman I know would try.
Some things are just too much.

Lucky she only knew Lord Reynard and not that other speedy
Liberalâ¦â¦..

Not Vera, admittedly, but how do you think Jack Dromey got his safe
seat?

And how can the judgement of any Home Secretary be taken seriously
when she chooses to sleep with Ed Balls?

I cannot believe that that man was once an Army officer. Policeman, or
traffic warden, I could believeâ¦

I can, however, believe he is an MPâ¦ after all, the whole shooting match
has been exposed for what it is recently â vile, corrupt, self-serving and
utterly unfit for the purpose of governing the country.

Sad to see that Mr. Edwards has to get his licks in on the boys in blue â
who wearily had to go and deal with a rampaging Eric (again) â after he was
clearly not sufficiently punished by the courts, or rendered unable to
frequent such august watering holes with the other politicoâsâ¦ Donât they
have enough on their plates, Mr. Edwards? They get a pension hike this
month, their pay cut this month andâ¦ horror of horrors, the one true âtell
it like it isâ cop blogger has hung up his helmet!