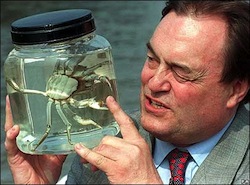 Some intriguing news from Hull.

They are to revive the ancient title of High Steward of Hull. The honorary post was abolished in 1974 as part of a local government re-organisation. Historically, the office holder was expected to act as a highly-placed lobbyist for the interests of Hull within central government in return for the honour of the title.

A condition of any appointment was for the postholder to be a Lord and a Privy Councillor.

Fortunately for Hull, they already have an ex-’steward’ who is both a Lord and a Privy Councillor. Lord Prescott – or Baron Prescott, as the famously ’down to earth’ ex-steward prefers to be known these days…

Curiously, they have overlooked him for the post, and offered it to the man he once described as a ‘crab’. Lord Mandelson.

I understand that the Blairite Alan Johnson, MP for Hessle, is the man behind this offer of new titles and baubles for Mandelson’s jewellery box.

If I recall correctly, Mandelson’s grandfather (you know which one) was
High Steward of Hull back in the sixties. I never really understood
why.
Does the office of Admiral of the Humber still exist, however
theoretically?

I recall being very impressed when I read that they had always had their
own telephone company. Also strange how Thatcher’s demolition of their
fishing industry – following orders from her EU masters – never attracted
the same opprobrium as her behaviour towards the coal mining industry in the
other part of Yorkshire.

I have heard that the River Humber is the arse-hole of England, and that
Hull is 7 miles up it.

No-one’s been to Bradford yet then ?

At least Prezza responded like a real man, when egged-on.

I imagine Mandy would get his boyfriend to issue a handbags-at-dawn
duelling challenge.

A real man would have asked for the egg to be fried and served with the
rest of the breakfast.

Out of the to, Mandelbrot has influence; Prescott is a superannuated
oaf.

I lived in Hull for about 15 years and found that Prezza was not
particularly popular with the locals – but as it was solid Labour he was
guaranteed his seat in perpetuity.
It is worth noting that he was rejected
as police commissioner so they did show their feelings when it was no longer a
“political” matter.

By the way, I thought that he used to be a Bar Steward – although people
who know him tell me that he is a nice guy and a loyal friend.

Addendum
Seems “The Idler” and Crap Towns is still pottering along. Here
is the link to their archive.
I remember the “Crap Jobs” and “Crap
Holidays” books now. I haven’t seen them for a while, though.
Here is a
link to an archive at The Idler web site

Thanks for the link. It’s very upmarket compared to the slightly raw
Chavtowns.

Hull has an interesting history. My memory I a bit vague but I was once,
for reasons which must remain obscure fournished with copies of its ancient
and Royal Charters which granted it special status and prerogatives and which
as our learned editor says establsihed its existence until 1974, when it
vanished in a puff of Parliamentary statute, only to magically re appear as a
creature of statute. I cant help but feel that however anachronistic, its
charters were at least more beautiful to read that the dull 1974
legislation.
However, I am concerned that the ermine clad Lord of Pies has
insufficient pensions and offices of state to secure him in his dotage. Surely
an honourary post at a modest sinecure of say £200,000 per annum could be
found for the man who has done so much for the city and stayed so close and
true to his root. Failing that a giant statute (for there could be no other
type) of Jabba the Hut could be erected in a prominent place.
On another
note, in about 2003 the first of the little but erudite “Crap Towns” books was
published. Compiled by the editorial staff of “The Idler” magazine, I think,
as a result of a free vote on its web site. Each “Crap Town” was honoured by a
short precis of just why it was so crap by a jaundiced resident or refugee
therefrom. Some of the entries were not only dry and hysterically funny but
hauntingly beautiful, and as a scathing record of the drab, mundane and
distopian Britain ruled by those such as Prezza and Mandy Balls it was par
exellance…
As I recall, Hull was the victor in that first pole, and there
was a scathing entry under the title: “Hull – It Smells of Death”
A
suitable place for Prezza to rule.
Sadly the Crap Towns series seems to
have died out; butif you can get your hands on the first one, snap it up.
G
the M

Now, now – let’s not start taking evidence or experience of the place
as, yer know, an indication of the metaphysical reality. I went to college
there for 3 absolutely fantastic years and a more excellent time would
have been impossible any where upon this orbitting rock. The locals were
really friendly – I fondly remember 2 chaps using their chum as a
battering ram to break down the toilet door as their other chum was inside
snorting all their coke – amazingly amusing and we invited them all back
to our house for an after party. The ‘Room’ nightclub was so friendly yet
at the vanguard of house music. The student area was completely
disregarded by the rozzers, there are boozers there which date back 1,000
years. If I had my way, I’d quite happily lob a few billion in as direct
investment ignoring the venal, self serving politicians they’ve had the
misfortune to have represent them. Hull maybe Hell, but Hell ain’t that
bad. Hmmm……just sayin’ is all.

I am not having a go at Hull DtP! I merely record the acerbic book.
In fact I have some fondish memories, and it seems a friendly little
place on the whole. A bit out of the way mind. But the near death of the
fishing industry has, as it seems to me, kicked the life out of the
town.

It really is quite tragic. It’s isolation does prevent it being
viewed in similar fashion as perhaps Liverpool or Glasgow in that
there’s no overspill but the level of abject decline, corruption,
irrelevance is heart-breaking. We used to call it the ‘sleeping
giant’. I blagged an economics degree there and the essays just wrote
themselves by wandering into Bransholme or Orchard Park. I seem to
remember that Luton was always the town to beat for crappiest dump of
the year award and never having visited. Mind you, have you ever been
to Sunderland – rodger me with a pineapple and call me Marjory but it
was something out of Bladerunner!

I have only one word to say to you Sir.

The word you were actually grasping after is Slough. Always to
be mentally suffixed with ‘of Despond’.

I see I have not been the only unwilling visitor to that
cesspit!

Interesting Pub Fact number 3,427 about Hull: During Operation Banner it
was used to train Army drivers before tours of Northern Ireland because of
its similarity to Belfast… right, I’ll go and get the darts.

Ye gods, is there no getting rid of the man? Not so much ‘crab’ as
‘cockroach’; it’s a fair bet that, in the aftermath of global annihilation,
Mandelson would be bustling about looking for ways to turn the apocalypse to
his own advantage.

Personally, I think it ought to go to Prescott in recognition of his
services to the English language, but would that make Pauline into a
Stewardess?

Problem with cockroachs mahceath is once they are in, it is one hell of a
job to get rid of them.