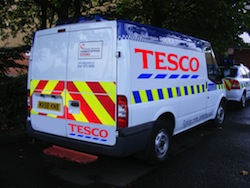 My, but the Police are unhappy this morning. Bawling their eyes out in fact.

The Assistant Commissioner, Simon Byrne, has described Detectives as ‘Constables in T-shirts and jeans’ thereby upsetting everyone. The detectives are upset at the insinuation that they are no better than your ‘ornery, plodding the streets, copper; when the fact that they mostly worked office hours and didn’t have to spend frosty mornings cleaning up the vomit on the back seat of their Panda had led them to believe that they were a cut above, special even – and the rank and file, those that are expected to fulfil every function under the sun from mental health expert to social worker to diplomat in the full unforgiving gaze of the public eye are equally pissed off to find that their white-collar – or T-shirt and jean clad – colleagues had actually been looking down on them all this time. A stroke of genius AC Byrne. Even Gordon Brown struggled to piss off everyone simultaneously.

Personally, and at the risk of having on-line Plod land firmly on my head, I think he is right. Whilst there will always be a call for highly specialised branches of investigation like fraud, or art theft – it does seem ridiculous to have a caste system within the police, whereby the front line copper who knows every car thief on his patch is not considered capable of investigating a car theft. Considering that all detectives start life as constables, they didn’t magically acquire a higher intelligence when they made it to DC, merely more training – so why not train all policemen to the same level?

But if Byrne has upset the delicate balance of one up-man ship within the police force, his next suggestion will generate endless headlines. He wants to station front desk police inside supermarkets and post offices. It probably sounded sensible in the think tank, why have special buildings just to report a crime, why not have the facility where the people already are? Probably because he had never investigated the caste system that operates within British supermarkets. If you own a multi-million pound house in Islington, you don’t do your shopping in Lidl or the local Poundshop, that’s why. If the burglary in your multi-million million pound house in Islington has traumatised you, that is as nothing to being forced to jostle in the queue at Poundland along with the overweight Kylie’s and Craig’s in order to report the incident. The fun will really start when the Guardian run articles explaining why Sharon didn’t report that an ageing celebrity shouted ‘wot abaht it darlin’ at her 30 years ago because ’she didn’t feel at ease in Waitrose’ with all those posh people…

Anybody would think that the police were just a commodity, to be displayed alongside the turnips…I didn’t realise until I started looking into this that Tesco’s already sponsor police cars and build police stations.

Shall we have ‘seven or less crimes to report’ desks, or ‘self reportage’ aisles with scanners for your ankle tag? Tannoy announcements for ‘Plod to aisle seven please’? Will you be able to get a home delivery of a policeman? ‘Ask a Policeman’ reduced to ‘Where’s the Baked Beans’? Extra Nectar points for the habitual offender?

I foresee hours of fun from this one, still at least the doughnuts will be handy. Where’s a policeman when you need one? At the doughnut counter…

A special prize for the best good humoured one liner on this subject today. Probably a doughnut!

XX The detectives are upset at the insinuation that they are no better than
your ‘ornery, plodding the streets, copper;XX

That is EXACTLY what they are!

EVERY policeman exists to “support the man on the beat”. A Detective
Constable is a CONSTABLE!

No better, no worse!

The times I have been a hairs breadth away from punching someone in the
nose when they say “My Cousin (Fill in with whatever relationship) has been
“promoted” to detective.”

He has been given permission to turn up at work in a civy suit, or, as
written, in jeans and T-Shirt. OTHER than that, he is a bog standard
constable, the same as the guy on the beat, on the motor-bike, dragging a dog,
or collectiong fingerprints.

But presumably they’ll be cardboard coppers, just like the ones already
trialled in supermarkets. The real ones will still be filling in forms, only
venturing out to nick you for selling gollywogs.

He wants to station front desk police inside supermarkets and post
offices.
*************
I don’t see what all the fuzz is about.

Would the Police desk have to display a Cell-By-Date?

It has always been a bit of a mystery how various coppers get selected for
promotion, what indefinable quality that they allegedly possess that sets them
apart from the herd.

Many, however, are career uniform specialists, who would be affronted at
the thought of doing pure detective work on one of the specialist squads.

Lastly, the view that uniform officers don’t investigate cases is wrong.
Many get saddled with all sorts of complex matters that the CID won’t deal
with. The lines are blurred these days. The cross section of the police
reflects society as a whole more closely. There are many graduates, I know of
three who have either ‘passed the bar’ or their Legal Practice Course, several
who have a Master’s degree, multiples who have passed the Sergeants Exam (I
knew one ‘old sweat’ who had passed the Sergeants, Inspectors AND had
qualified as a solicitor and was still a uniformed Constable, perhaps because
his face didn’t fit (or he wasn’t a Mason).

Simon Byrne always was a twerp…

I think you are being a bit harsh about Tesco Anna.

‘Less than ten items’ checkout for the shoplifters?

“Do you smell bacon?”

Speed traps for trolleys..”Who do you think you are then sir…Dale
Winton?

How many Nectar Points do I get on my driving licence for a speeding
offence?

“Over the wall we go! All coppers are bastards”

“I do a lot of shopping in Lidl, always transfer the goods into Waitrose
bags though, well you’ve got to keep up appearances, haven’t you?”

That’s the trouble with shopping. Sooner or later you always end up paying
the bill.

My brother in law was a detective constable for 18 years, because if he did
the sergeant’s exam, he would have to go back in uniform. Eventually he did
make sergeant and was happy to act as a father figure to the young
coppers.

“Considering that all detectives start life as constables, they didn’t
magically acquire a higher intelligence when they made it to DC, merely more
training – so why not train all policemen to the same level”

Hmmm…makes sense only if you ignore demonstrable benefits from the division
of labour and specialisation. Private industry would never consider this
approach, you wouldn’t get the sales team trained up to do the payroll and
stocktaking and every other function. You want all cops trained to the same
level? Seriously? You want to train them in EVERY specialist role, traffic,
counter-terrorism, computer forensics, narcotics, domestic violence, family
liaison, source handling, covert ops, computer network crime, wildlife crime,
environmental crime, public order, sexual crime etc etc etc etc? If this is
such a self-evidently good idea, then why doesn’t the much more cost efficient
private sector so the same thing? Detectives don’t feel they are a cut-above
the rest any more than anyone else in a specialist unit. They do feel that
they are (and blardy well should do) a cut above the rest in their sphere of
working…if they are not then their (often eye-wateringly expensive) training
and experience is wasted. Have you ever looked at the manual for investigating
serious crime? You seem to be suffering the same myopia that politicians
suffer from. A failure to recognise that the world has changed dramatically
from the days of Dixon of dock green. International terrorism, computer crime,
armed street gangs, even cross border crime didn’t even exist. Not taking into
account the crimes that were occurring but ignored for fear of scaring the
horses (domestic violence, child abuse, hate crime etc).
Yes, undoubtedly
the police are more aloof and distant from the public but the (absolutely
flipping correct) demands for more accountability means MUCH more form filling
in, meaning less time to actually interface with the public.

Yes, and surely it would make recruitment harder if there weren’t the
specialist roles. My niece is a copper working close to London in a field
that is so secret that family are not allowed to know (counter terrorism, I
think). She has a degree in math and physics and previously trained as a
army officer at Sandhurst, although she eventually decided that leading
convoys in Afghanistan was not her cup of tea. I suspect that she would not
be attracted to routinely cleaning vomit in Panda cars.

How many doughnuts can you fit onto a policeman’s truncheon ? More, we
assume, if he’s on parade and standing to attention.

Will you be able to get a home delivery of a policeman?

Maybe our AC is a G&S fan and is trying to prove that ‘a policeman’s
lot is not an ‘appy one’.

“Would you like a hand with your shopping, Sir?”

‘seven or less crimes to report’

at Waitrose it would of course be ‘seven or fewer’.

Gosh. I see you have mastered the wordless cut and paste, old girl.

Extra points if we blow into our own bags? (no I don’t mean the wife)