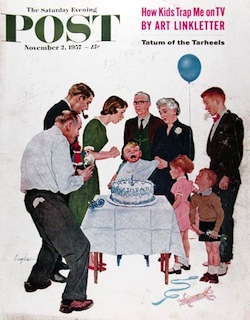 And indeed it is – the Birthday Edition! For this noisy, brawling, lusty blog is four years old today.

53,000 comments over that time. I have had to moderate less than a handful of them, and only banned two people – solely because the infant blog managed to attract a community of wet nurses who have watched over it carefully, endlessly contributing their time and superior knowledge to correct me, guide me, inform me, entertain me – and slowly improve my spelling!

I’ve no idea how many hits there have been during those four years – I don’t follow the stats, ever since my host e-mailed me to say that I’d had 25,000 hits one day and they were moving me to a larger server. It put me in shock and nearly stopped me writing – who are you all?

I was never more grateful to you than when I was ill; there were days when I could do little more than crawl to the computer to check that all was OK with my ‘baby’ – and you were always there, supportive and willing me on; chatting amongst yourselves, waiting for me to put pen to paper again – and cheering when I did. You will never know what a huge difference you made to some very dark and frightening days.

As if by magic, in time for this fourth anniversary post – some of the original Blogfathers that inspired me to try my hand at this blogging lark have reappeared on the scene:

Devil’s Kitchen – couldn’t stay away, and returns in fine fettle as ‘The Devil’s Knife’ – please note this is a new link for him.

Ian Dale – has decided to blog on his own once more, and also has a new address. I much prefer Iain’s output to the group blog…

JuliaM, whose output puts mine to shame, continues to fillet the unspeakable, and always has a spare few minutes to add comments to everyone else’s blog – when does she find time to wash her hair?

A special mention for the anonymous person who has put together the definitive ‘Hollie Greig story was a hoax‘ blog. Debunking that particular story was nearly the end of me as a blogger – at the time, the story had great support, and I incurred the ire of large sections of the blogosphere for disbelieving it and publishing rebuttals to some of the ‘accepted wisdom’. As a result I was on the receiving end of the darker side of the Internet, the vicious e-mails, ‘outings’ and general unpleasantness that the Internet can be capable of – but finally, nearly two years later, the truth has come out, and Hollie’s welfare is now under the control of qualified professionals who put her best interests and those of her Mother’s first – and not those who would make a living out of appealing to the latent paranoia that lurks in corners of the Internet.

And another special mention for a blog that is barely 10 months old, but has hit the ground running and is well worth following – ‘Kebab Time‘.

Help yourself from the Bar, make it a double…

Required reading. Thanks. And as for your generating that amount of copy:
just awestruck. Keep on trucking.

Happy birthday Anna, and well done to all those blogs. Kebab Time is now
becoming required reading, and as for Julia M, what can I say? The Queen of
Twitter?
But can I also make special mention of the wonderful
Clarissa
http://www.misanthropegirl.me.uk/
Make mine a large
one!

You are too kind, Brother Gildas.

Happy Blog-Birthday Anna. I always find good writing here. Many thanks for
being such a great host.

Only 4 years ? Feels like it’s been there forever. Hope it is.

Happy Birthday and thank you and your fellow posters for interesting,
thought provoking and not at all predictable stuff. It is much appreciated.
Lang may yer lum reek.

Congratulations to you… 4 memorable years, 4 years of doing the ‘blog job’
properly.

Make mine a double of your most expensive Scotch… If you are going to fall
off the wagon, do the job properly!

Only four years? How is it possible? I guess it’s the broad scope of your
subjects that has made you seem to have been here for longer – from sensible,
well rooted reviews of dreadful subjects to the story of the tightrope walker
in your village to the libertarian party fiasco to travelogues to sponsoring
entertaining contributors. Thank you for making the blogosphere an
entertaining and better place.

Judging by the continued mass media silence about the weaknesses in the
Duncroft Tales, none of us are “investigative journalists”…..

Many happy returns! Here’s to many, many more

Happy birthday to the snug and all those who keep it running whilst we
regulars sit and listen and/or argue on the other side of the bar.

To your good heath Madame!

May I be one of the (no doubt) many to sincerely wish your blog a happy
birthday, and a special cheer too for its creator and mother.