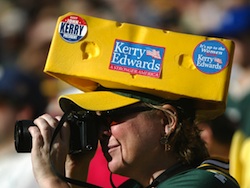 The Canadian Mounties always get their man. In this case, one of their own.

A ring of corrupt cops had taken to cheese smuggling. A profitable business. Cheese accounts for 80% of the cost of a pizza, and in Canada, there is a 200 to 300% tax mark-up on imported cheese. The cops were making an average £1,200 a week, just for driving across the border to a downtown Washington supermarket and flashing their police badges as they returned undercover of darkness.

Constable Scott Heron of the Niagara Regional Police and his two partners were charged with conspiracy, smuggling and other customs violations for allegedly transporting over $200,000 of cheese into Canada from the United States without paying any taxes.

The Canadian government put this horrendous mark-up on imported cheeses to ‘protect their Dairy industry’. Instead of a few dairy farmers going to the wall because they can’t compete with US rivals – every Canadian citizen is forced to pay a levy every time they eat pizza – to financially support those Dairy farmers. Roll on minimum alcohol pricing in Scotland. The A.1. will be a continuous line of white vans heading North. Every little helps…

This story is full of holes – and ripe for the pun-masters on Anna Raccoon.

So – a fine Camembert to the winner. Ahhh, if only I could get Stinking Bishop over here, I miss it so.

Happily, the EU has just stuck a spanner in the works of Scotland’s minimum
pricing nonsense.

Independence? I think this isn’t it.

A parcel of RCMPs
Illicitly supplying cheese
From over the
border
(On spec, or to order?)
For profit. That was quite a wheeze!

But why should there be such a market?
I won’t keep you all in the dark,
it’s
Because of the rent
Of two hundred per cent
So Canadian farmers
don’t cark it.

Now hot on their trail were some guys
With plaster, dog sniffers and
spies
And no expense spared
To secure those who dared
Cheat the
taxman. A word to the wise:

That if you’re employed by The Man
And smuggling cheese in a van
The
gist of the facts is
You can’t avoid taxes
Without getting busted
enfin.

On the opposite side of the pond, you
Read of Mounties cheese-smuggling
for spondu-
licks; I’m sorry to say
They had quite lost their
whey
and ended up deep in the fondue.

I’d hate to be part of a dog sniffer team. Urgh

Robert W. Service wrote something along the lines of:

A bunch of the boys were making pizzas in the Niagara Pizzeria;
The kid
that scatters the cheese was cutting it fine ‘cos it was so dear;
On a
banquette, with a garlic bread, sat Constable Steve Heron, NRP,
And
watching him tear-n-share were his fromageurs, the guys known as Cheddar and
Brie.

The problem is due to the Canadian dairy industry’s reluctance to compete
internationally when faced with a shrinking home market. It knows that if it
tried, the subsidised American dairy industry would swamp it just like it did
to the Mexican industry. Agricultural products were excepted from NAFTA to
because the US agricultural lobby didn’t want to lose its subsidies (=
barriers to free trade).

Rocamadour (or Cabécou)
Is made quite locally to you.
Who in their
senses would prefer
A hackneyed Norman Camembert?

The Stinking Bishop that you’ve missed
Offends me as a
linguist.
Somebody had the brazen neck
To plagiarise a Pont
l’Evêque
:

What English mongers tried to forge
Is still produced by E.
Graindorge.
To Carrefour or Leclerc please go
And don’t forget who told
you so.

You wanted limericks? Oh Pooh:
This is a sonnet -will that do?

10/10 for accuracy – Monterey Jack is an abomination that could be
stomached only by the nation that created Poutine (chips topped with gravy
and curd cheese, for those hitherto blissfully ignorant; http://en.wikipedia.org/wiki/Poutine, clearly written by an
enthusiast, will tell you more than you could possibly want to know about
it).

Some Mounties with a car full of cheese
Their countrymen they thought
they would please.
But the almighty stink
Made a border guard
think,
And the Mounties were brought to their knees.

They desperately recruited the worst of British plod and importation of the
UK’s de brie has proved damaging.

Predictable and tedious Melvin.Do they call them radiators in Canada?

You always do ‘Blue and Smelly’ very well but you forgot to state which
cheese you are impersonating, WPC Jaded.
Fromage de Cochon,
perchance?

For a Mountie to smuggle Caerphilly
Down his trousers seems frightfully
silly.
Apart from the mess
In his uniform dress,
Just imagine the
smell of his willy.

Seems a long way to go when the border to New York state is just across the
bridge. The “Buffalo News” says the cheese was bought in New York, by which, I
presume, they mean New York, New York.

Looks like a crisis!
This could be Mekkerbrek time…
I will ask my
friend Roderic what to do. I am looking after his cat at the moment, a
Tyrolean Gray….

I think you mean that the Tyrolean Grey is temporarily in charge of
you….

Pizza chefs right across Huron County
All welcome the sight of a
Mountie,
The cop’ll say, “Fella,
“You want mozzarella?
“I’ve plenty,
and at a discount, eh!”

If he’s wise he will offer piano;
Mozzarella and
parmeggiano
The Mafia runs those –
If you get up their nose,
You’ll
end up broke and singing soprano.

Maybe the Mounties should be checking out Constable Scott Heron, if he is
any relative of the well known singer Gil (Scott Heron), he might be into some
other type of smuggling… the sort that can give one a holey nose.