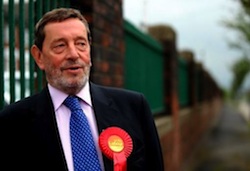 Like Marley’s ghost, rattling the chains of Old Labour, the spectre of David Blunkett hove into view this morning.

He is giving ‘delivering a pamphlet’ – an upmarket version of writing a blog post, except that his has a forward by Ed Miliband. It’s not a lot different to the excellent qwighim site where you can have hours of fun learning the thoughts of Chairman Blunkett.  I had assumed that when Blunkett announced that he was donating his brain to medical science he had planned on hanging onto it until he popped his clogs. Maybe not.

Naturally the Guardian has been given advance sight of this revolutionary pamphlet. It is called ‘In Defence of Politics’. It will show us the way forward, to re-engage the voters. Or at least, those voters that Mr Blunkett wishes to re-engage. The sort that still believe in the Tooth Fairy and the Money Tree.

It seems that right-wing politics is too authoritarian. Keep a straight face. He wishes to deliver a ‘stinging rebuke’ to ‘dangerous overbearing German Imperialism’. It is apparently Merkel trying to ‘veto the voters’, and without the German austerity measures, the crisis in Greece and Spain ‘would never have happened’. Remind me, Blunkett, if Blair had listened to the voters, would we have had the Iraqi war? Merkel didn’t veto the voters, she just refused to give Greece any more money unless they reined in their spending. In Blunkett’s world she should have just handed over the money – and she is too authoritarian?

How do we re-engage voters to ensure that in future people with money just hand it over without imposing any restrictions on what you do with it? By educating the next generation, otherwise known as indoctrinating the children. The left are so selective as to what they think children should be taught.

He suggests enlisting the support of the school governors and charities such as ‘Make Poverty History’. Had he suggested teaching them simple economics I might have had more sympathy. Poverty used to mean ‘not having enough’, but these days it means ‘not having as much as the next man’. *Sigh*. An entire generation brought up to believe that politics means mugging anyone who looks as though they have more than you.

What they are taught in school might not matter so much, were it not for the fact that in the next breath, he suggests, wait for it. A tax on Google. An ‘information tax’ no less.

He proposes a tax on search engines, such as Google, recycling journalism. “If proper journalism goes down the pan, we are all doomed”, he said. Why not a tax on Encyclopedia, David?  Have you thought how you will go about taxing an American company?

By proper journalism, he means those newspapers that haven’t been harried out of existence by the concerted efforts of Tom Watson and Co. He’s worried about their commercial future. Why not go the whole hog Blunkett, and pay the Guardian out of taxpayers money, it’s damn near kept afloat by civil service advertising?

He also warns that greater transparency about the lives of elected politicians has increased rather than decreased voter scepticism. “More is known about our professional politicians than in the whole of our history”. Yes, and Google is our friend, quickly reminding us that Blunkett still takes the Murdoch shilling, still has his retainer from the discredited A4E, and was part of Blair’s government which engaged in a fair amount of dangerous overbearing imperialism in its time.

Blunkett forgets that voters love voting. Catch up with the ghastly ‘Big Brother’ – they will actually pay to vote if given the chance. Pay attention to any of those ‘Does Pasta come from a) Nigeria b) Iceland c) Italy – if you think you know the answer add another five quid to your phone bill and you could go on an all expenses paid Hen party to Slovakia…..’ adverts.

It’s waffling politicians they can’t be bothered to vote for.

Does Blunkett come from:

b) The cupboard where Blair keeps all his bad ideas.

Go on, vote. You could win a ‘pay all your own expenses holiday’ in the Raccoon caravan.

The answer to the quiz is “none of the above”.

Blunkett comes from eating too much cheese late at night.

“…Blunkett announced that he was donating his brain to medical
science…”

But medical science are contesting the will…

I can’t forgive him for inventing PCSO’s.Anything else he has ever done or
will do in the future will not be as bad as that stupid decision.

Plod equipped with a decent crystal ball would have foreseen my
explanation that PCSO’s were created, not invented.

I don’t need a crystal ball Melvin to see how predictable your posts
are getting.Self-proclaimed king of the internet and grammar police
wannabee.

I’m with Jaded on PCSO’s. Their function is what exactly…?

By the way the answer to the quiz is a). Outer Space – specifically the
Moon…. The man is a Gonk!

Utter utter cunt. His head is so far up his arse it is sticking out of his
mouth. For some reason he is never off the BBC. Ah. I got it. He’s a
discredited Labour politician. That’s why.

Say what you like about David Blunkett, but you can’t say he’s a politician
who lacks vision. Oh, hang on a minute……

But as the one who ran the Democratic People’s Republic of South Yorkshire
(into the ground – has anyone noticed how much Sheffield improved after he
left ?), we should never be surprised at his utterances. But, as with his
support of ID Cards etc, it transpired that he was closely linked to
service-providers in that area. As ever, when Blunkett talks, follow the
money…..

The only thing that would improve Sheffield is measured in Kilotons.

“The only thing that would improve Sheffield is measured in
Kilotons.”

The allotments could certainly benefit from some (are we thinking of
the same stuff?)

Fuck me, a lesser spotted socialist – I thought they’d all migrated south
for the winter by now.
Remind me again, was it a bust of Stalin they had in
the Sheffield council offices when he was The Man ? It was deffinitely some
socialist mass murderer he aspired to emulate.

He said: “Angela Merkel has behaved in a very dangerous, almost
imperialist, manner. It is ironic that Europe was established to stop one
individual government having overbearing power, and here we are.

So he wants to tax ‘recycling’ of news by Google. Not sure what that means,
unless he doesn’t like Google Reader? With basic search you still have to go
to the site to read the full article. And will this apply to the day-to-day
churnalism of the dead-tree press? That could kill it all by itself…

Can you get google news in braille? I know you can get a driving licence
app in it.

Is this the Blunkett who once believed that computer ownership and use
should be licensed by local authorities and under strict national guidelines?
Also that school children were clearly incapable of using such technology and
education and training in it should be restricted to higher education? And the
man who wanted the coal industry to be helped by all the unusuable coal being
treated to make usuable at vast costs to the taxpayer? And the man involved in
the student games which made a huge loss? And the man in charge of Sheffield
when the level of business rates wrecked the town centre?

And people keep voting for him…

Or they keep rigging the jury.

Don’t suppose you’ve got a link – just wandered over there and have spent
30 minutes in wuckfittery’s waiting room. I do so like the comment threads in
the guardian but only in small doses when i’m avoiding work or something.

Having just revisited it to pick up the link for you – I see the comments
are becoming quite entertaining – even Guardian readers attacking him!

“Does pasta come from a) Nigeria, b) Iceland or c) Italy.”

Well, Iceland, obviously. Though other retailers are available…

i’ve always struggled with this.. Do socialists actually believe money
grows on trees, or are they just ill – as if socialism is some kind of
disorder that we have periodically purge and attempt eradicate.?