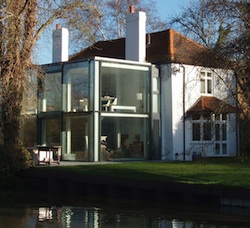 With exquisite timing, David Cameron has found a way to boost the economy. Whew! Just when we thought he was bereft of ideas.

As from today, you can build a bigger conservatory on your house. The very thing for hard-working tax paying heavily indebted families. If you hurry, you will increase the value of your house in time to catch Labour’s newest brain wave – the Mansion Tax. Yes, I know you thought that was a Lib-Dem idea, but Labour have annexed it. Its part of the pre-distribution deal – this week’s buzz word. Pre-distribution, it’s the idea that you can distribute the wealth of the rich before they’ve even earned it. Brilliant idea, even better than the last Labour one of Tax Credits – tax credits meant you had to go to all the trouble of getting a job to have some of the rich’s wealth, but now, hard pressed benefit families are to be saved that inconvenience, and pre-distribution will bring you the benefits of some other bugger’s efforts right to your sofa! No wonder some people are predicting that Labour will get reelected!

Anyway, back to Conservatories. All you have to do is increase your mortgage and sign up with one of those double glazing firms (if you can get them on the phone in between all the celebratory parties going on) and you too can have a massive carbuncle on the side of your house. Your house will be worth even more theoretical money. Not that you can actually get your hands on this ‘more money’ ‘cos a) you owe the double glazing firm twice as much as the increase in value, and b) nobody can borrow the money to buy the house from you anyway – but you’ll feel better, you’ll go to bed at night knowing that you are worth more money, you’ll see that a Conservative government is doing something to help you….

Planning requirements have been slashed, planning solicitors are slashing their throats; estate agents are suicidal – no longer will they be able to tell you that ‘they could have sold your house if only you had an extra room’.  TV advertising companies are gearing up for all the extra business from Everest, regional newspapers are rubbing their hands with glee at the thought of all that classified advertising for ‘commission only’ salesmen – and you?

Look, all you have to do is find somewhere you can borrow the money from to pay for it all – I didn’t say the scheme was perfect did I? Think of yourself as an economy booster.

Resistance is “footle” (as they say in America), especially if they can say
that the rules were relaxed for ya.

It’s all a subtle plot. They’ll wait until the new extensions are nearly
finished, and then ………….. bring back the Window Tax!

Those brickies who work cash-in-hand will be salivating at the prospect of
all that black-economy business.

“In the light of these new planning laws I am going to have the most
massive erection….”

I believe this initiative may be subject to a U-turn.

When the idea was pitched to the Camoron he apparently mis-heard it, he
thought it was a scheme to add a conservative to every home, he will be
astonished when somebody explains they said conservatory.

Still, I look forward how the word conservatory gets translated into Hindi
and the results in the back yards in Southall and Newham.

Care to speculate what these follies will be known as in future?-I submit
Camservatory though it’s hard to explain what tory is doing in that word.

I expect retrospective approval for all those illegal Southall sheds to
go through now as it saves the effort of doing anything about having large
numbers of people living in sheds and makes it all kosher.

Kosher? In Southall? I must have my cultures confused.

And Cameron’s Clique would gain the support of people it prefers to
associate with instead of boring old conservative voters.

I cannot understand how relaxing the planning rules only four years after
permitted development rights were relaxed will encourage
homeowners to build even bigger extensions. Part of the reason why
construction is sluggish is the extortionate 20% VAT charged on extensions.
Cut it to 5% and increase VAT thresholds and the tax take will exceed the
present amount as projects become affordable – or does that logic only apply
to high salaries. Click here for Cut the VAT.

Absolutely right Brian on both points.
Living in a part of West Sussex
served (?) by a disfunctional District Council locally known by some of us
as the turnips has shown another problem, that of the Planning Dept’s
resistance permitted development. True the legislation is more than a little
flawed, but permitted development is just that; and quite correctly there
are measures available to councils to protect sensitive areas- Article 4
Directive I think. Presumably something similar will be available under this
latest panic move to pretend govt’s doing something.

GREAT!. Now I will be able to grow tomatoes in my conservatory on the three
hour for one day a year the sun actualy gets into my back yard, between the
shadows of Slag heap lane and rail way embakment row!

Is growing veg in your Conservativory the modern-day equivalent of
keeping coal in the bath?

How can it be, when these islands have been subjected to the greatest
invasion in its history, that GDP is static or in decline?

Even before the ‘crash’ the politicians of all parties didn’t make sense –
somehow we were supposed to ‘save the planet’ and yet have ‘growth – often
these two sentiments were contained within the same sentence!

We are told that debt finance was the cause of the ‘crash’, both by
government and as individuals, yet apparently the solution is to increase debt
and punish savers. I don’t get it.

Thrift, in all its forms, is clearly ‘wrong’. Saving money is wrong and
keeping it in the form of ‘mansions’ is also wrong.

Spend! Spend! Even if you haven’t got the money.

Indeed; I can’t fathom it either. With the benefit of hindsight, we now
see that the ‘growth’ we had before the recession was bought with
unsustainable debts, and the next generation is already saddled with the
consequences since they’ll have to pay the interest, even if they don’t
manage to pay back any of the debt. In America, the National Debt has
reached $16 trillion, and in Europe, they’re playing a mad game of ‘pass the
parcel’ with each other’s debts – Lord knows what will happen when the music
stops.

It may seem radical, but shouldn’t we be encouraging people to earn it
rather than spend it?

The only logical reason for it is to increase house prices – there’s no
known demand for conservatories! I just love the way the middle class
(does anybody else have the land to build a conservatory?) are being
encouraged to increase their debt to kick-start the economy. Isn’t middle
class debt part of the problem?

There has to be a limit, though, doesn’t there? First-time buyers
can’t afford houses as it is, so people can’t move up because they can’t
sell. It’s a microcosm of the entire Western economy; trying to mend the
economy by sticking a metaphorical conservatory on it is a bit like
trying to solve a million pound overdraft with a ten bob bit.

I can’t wait to hear what happens at the forthcoming Conservatory Party
Conference: I expect more wondrous ideas will be annexed as they increasingly
lean-to the Left. I think they should shed all of their silly ideas. Send ‘em
all to the glass house, I say..

That’s what I thought when I started reading… There’s a pun to be
made here… Too late.. Caedmon got there first…

…That’s weird, My comment has been severely truncated… There was a
joke, I can’t be arsed to repeat though… it was bit longwinded. It
made me laugh anyway.

As the old saying goes, “People in glass houses shouldn’t”.

Why not let them eat Conservatives?

LibDems, Liberals and “Sheep in Wolf’s clothing” by the score…

A fine post on an unpromising topic; you’re on sparkling form today, Ms
Raccoon! I can’t help feeling your title has it perfectly summed-up; Cameron’s
idea of a conservatory probably bears very little resemblance to the uPVC
monstrosities that are likely to be erected in his name.

At least this should be good news for these two – assuming they’re still in business.

I’m indebted to you for that link Mac – this line will stick in my mind a
long time, and be regurgitated one day when everyone has forgotten where it
came from (Oscar!)

Yes, it’s a good one, isn’t it? For those interested in how not to
conduct a sales pitch in a foreign language, the relevant extract is
here:

(you may need to allow a few minutes afterwards to straighten your
toes).

Argggh! Classic – I particularly loved “Mahog, Mahog”, (leave the end
of the word off and the foreigner is bound to understand)! Mahogany is
Acajou you utter berk, you could have looked that up first!

The really crazy part is the idea of government support by way of a £10bn
fund to pump-prime (ghastly word) the hoped-for construction boom. Only an
idiot would put taxpayers’ money at jeopardy by supporting transactions that
commercial lenders with an understanding of risk will not touch. But then only
an idiot is what we’ve got.

Can the state-owned Investment Bank next to select business turkeys be far
behind?.

Instead of tinkering in the margins, as this is, and if they really wanted
a way to boost the economy then they would allow fracking for shale gas as
well as dropping the subsidies for windmills.

In the US shale gas has reduced the cost of energy and the economy is
starting to improve if only by the fact that cheaper energy means that people
have more money to spend.

Will anything like that happen in the UK, I doubt it, after all the BBC is
pushing left green policy.

Dead right there ivan. We have managed to elect idiots who have been
conned by the global warming/climate change/renewable energy arseholes for
far too long. But of course if anyone wants to start something like fracking
we have the other arseholes who complain about it disturbing a nesting pair
of lesser spotted black ringed green titted throat warblers or some newts or
other such guff.
In the sixties it was estimated that GB coal reserves
would last about 300 years. We are sitting on energy resouces but the greens
(God rot their misersble stinking souls) won’t allow them to be used, so we
pay more and more for a decreasing supply of energy.

I heard Nick Clegg on the radio this morning.
I wouldnt let him run a
tombola at a school fete, let alone a country. Still, we get the politicians
we deserve, I suppose.
We are doomed, I tell ye! Doomed!

Some people thought “fuck ‘em” and did it anyway, years ago.