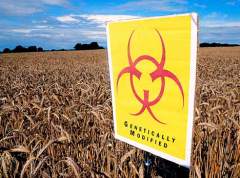 Contemplating protests so widespread in America about genetically modified organisms (G.M.O.s), Iâm struck by the facts that Americans to-day, just as peoples around the World, are taller and generally have a greater life expectancy than ever before.  (Admittedly the Dutch are taller but thatâs because much of Holland is below sea level and they have to be or they wouldnât be able to see over the walls.)

Whilst itâs true that some parents are burying their children, this is due to a diet of manufactured food heavy in refined sugar, saturated fats and, to a lesser extent, salt â more significantly to an excess of such food.  The general population, which ingests G.M.O.s not incidentally, as one might expect of animals, but as part of its diet, appears to be thriving â in America as where ever such products are available.

For a myriad of years we have as farmers been effecting genetic change in both crops and livestock.  For most of that time the process has been slow :  we could not isolate individual genes and, in any case, had no understanding of the precise mechanism that brought about the traits we sought.  What the agrochemical industry is doing is merely condensing the work of decades, even centuries, in to years.

This is not to say that genetic modification is without risk :  that exists whether scientists do it over a decade or farmers over a century ;  development, something man is able to achieve at a rate not available to other species, entails risk.  We sail the oceans and fly the skies ;  occasionally a boat sinks or an aeroplane crashes :  even the animals, having developed these skills organically over millennia, sometimes suffer such failure.  So what ?  Ought we then not to take risk ?

Safety is the management of risk and itâs because experience tells us that, left to their own devices, industrial corporations might not tell us about failures in their tests or about failures later in the field that we have the Food and Drug Administration and similar agencies in other countries to keep them, as far as they can, honest.

If weâre to feed the Worldâs burgeoning population â and the longer the poor are left in poverty (sc. not allowed to burn their own fuels so that they have reticulated electricity) the more rapidly it will grow â we must find ways of making the land more productive.  One way is to increase cropsâ resistance to pests.  We can do this by spraying crops with almost indiscriminate pesticides, inherently risky to wildlife and the environment generally for obvious reasons, but much more efficiently by targeting particular pests with dedicated characteristics of the crops that will eliminate just those pests.

Till we become omniscient, however, we shall not be in a position to avoid risk altogether ;  what we must guard against is fear of the unknown.  We must get away from regarding science as a system of religious belief, its church the Internet, and return to science based on honest research, clear thought and scrupulous peer review â all things sorely lacking in the âscienceâ on which so much public opinion and policy are now based.

There is actually a pretty important difference between selective breeding
and GM.

Itâs the difference between on the one hand choosing an application that
does what you want better than another that doesnât, and on the other meddling
with the source code of a gigantic application, which code you didnât write
and do not understand.

They are not the same thing.

Consequences of the latter will certainly be unpredictable and may severe
or even catastrophic.

This is a wind that we probably ought not be sowing. Nobody knows what the
harvest will be.

I eat pork and diced carrots. What the Hel can be dangerous with stuffing a
carrot with bits of pig, even, or should that be ESPECIALLY when, those bits
ARE so microscopic as to be beyond the comprehention of most people?

What is the difference if the genes are âmixed in your kitchenâ, or âmixedâ
in some laboratory?

And the swine, though he divide the hoof, and be clovenfooted, yet he
cheweth not the cud; he is unclean to you.

As far as meat goes, I eat ONLY pig. Under the motto âHalal THAT you
bastards!â

In the climate of the Middle East, avoiding pigmeat was probably a
sensible precaution 2000 years ago. However, in the temperate climate of
North-West Europe, the pig is a very useful animal â it is omnivorous, and
can survive the winters. In what was to become Britain, keeping and eating
pigs was something known to the people of the Bronze age, the Iron age,
the occupying Romans, all through the Dark Ages and into modern times.
Eating pork and cured pork products such as bacon is as culturally
engrained in the peoples of North-West Europe as eating rice is to the
peoples of Asia.

I have a few qualms about GM. The âfeed the worldâ thing doesnât really do
it for me, given the previous outcry against âTerminatorâ genes (thankfully
disavowed by Monsanto) and the patenting of basic foodstuffs. In both cases, the farmer is
required to go back to the seed producer each year to buy more seed. In
business they talk about âowning the layerâ. For Amazon, itâs books, ebay does
Auctions, PayPal does money, Apple has iTunes and the App Store. In this case
the layer happens to be food, which is good for nobody but the big Agro-Tech
firms.

Secondly, weâre not talking about selective breeding â that is taking the
best of the plants to breed better ones. The idea behind GM modification is to
take a genetic marker that doesnât appear anywhere in the plant naturally, and
introduce it. The resultant creation is visibly the same, but inherently
slightly different. In a laboratory setting this might be interesting science,
but to redesign the DNA of a crop and then to release it to the wild
thereafter to cross-pollinate with all other ânaturalâ varieties has a wide
potential impact, and denies choice to those who like their cornflakes as
nature (or God) intended. Once out of the box, this cannot be put back.
Whilst not quite the âgrey gooâ spoken of by Eric Drexler there could be a
similar effect.

For what itâs worth, the low tech solution is probably the better one here.
Half the world is overweight, whilst the other half is hungry. It doesnât take
a genetic scientist to figure out that one.

And your non-coercive solution isâ¦.

Iâve no qualms about eating GM crops although if we want better yields to
feed the burgeoning population pumping more CO2 into the atmosphere is a
better and cheaper way to go. What does worry me about the push for GM however
is how it would concentrate almost total control of the food supply in the
hands of a few corporations led by Monsanto which has as good a record on
environmental sensitivity as Hitler had on racial diversity.

âIf weâre to feed the worldâs burgeoning (I had to look that up twice to
see how it should be spelled!) populationâ¦.â We already have the ability to
feed the worldâs burgeoning (didnât need to look that up) population. It is
not only, however, a matter of transport, it is a matter of political
intransigence and financial incentives. The western world throws away twice as
much food as the third world requires to avoid starvation. Political barriers
(the EU agriculture policy to begin with) prevents the distribution of food
around the world, as does the American policies of taxes, import duties and a
preference for home grown agricyultural products, even though they cost three
times as much as imported products. However, having staved off starvation of a
third of the worldâs population, it then falls to education to rebuild â
chopping down trees so you can grown animale feed is not necessarily a good
thing â and this is the real long term problem. I forget who it was who said
something like, âFirst, kill all the lawyers.â Perhaps he should have followed
that up with, âand then the politicians, and Jeremy Clarkson, and the
French!â.

Yep! (can we do Jeremy Clarkson first though?)

Saturated (animal) fats are not unhealthy. The idea that saturated fats are
unhealthy is based on the âlipid hypothesisâ which has been thoroughly
debunked by science. Humans evolved eating saturated fats and consequently are
well tolerated.

In the last 50 years healthy animal fat has been replaced with fats that
have never existed in human diet (refined oils, corn oil, vegetable oil,
etc).. Resulting in the large rates of cardiovascular disease we see
today.

Science has also proved that livestock feed a natural diet, grass feed beef
for example, has a very healthy nutritional profile, compared to
industrialized methods. Livestock on a natural diet have elevated levels of
omega-3. For ideal health humans need a diet rich in omega-3. Fish is the only
other major source of omega-3. Additional science has found that pasture
raised beef produces significantly less methane (which greens love to
ignore).

We live in a world were science is ignored, much like this article.

It isnât, it is just a means to ensure that publishers donât look
stupid.

If I find a colony of penguins in the arctic then that is science fact,
provided I know where the arctic is and what a penguin looks like. Peer review
says âimpossibleâ; science says âletâs go and confirmâ.

Is it actually science that is at fault or is it the green religion on
which the blame must be placed?

At the moment it appears the green religion is leading the fight against
science and advancement in all spheres, climate change, GM crops, population
growth and so on, with their cry of âthe earth is doomedâ.

The more people that believe the doom and gloom the more self fulfilling it
will be.

There is an answer to that â better education in science and engineering
with the emphasis on teaching people to think for themselves. Unfortunately,
that precludes the current generation and maybe the next until the necessary
teachers can be produced that do not bow down to the green leftist
religion.

Indeed. The problem is not science, but the wilful manipulation of
scientific research reports (which are often, by their very nature,
inconclusive, hedged with uncertainties, sometimes even vague) by people
with axes to grind. So the report that states that the Earthâs climate may,
if current modelling is correct, warm by between 1 and 3 degrees over a
period of 50 to 100 years becomes âClimate will warm 3 degrees in 50 years,
say boffinsâ.

The GMO objections of about a decade ago arguably had one thing about
right. The results of the science were commercially exploited with ruthless
drive and merciless resort to litigation against any who stood in the way,
intentionally or not. That was a great tactical error by the corporations
concerned. Had they been a little more patient, they would have won the day,
I think â and by more honourable means.

Science and engineering are often highly complex and nuanced, and donât
readily respond to soundbite journalism or the sort of simplistic responses
commonly found in the humanities. I agree with Ivan that better education is
the key â but better journalism must play a part, too.

Iâm with you, Engineer :  had the
corporations not been so heavy-handed, they would not be up against such
fierce opposition now.  Î Î

You are right, they should have just stood by to be slandered and had
their property destroyed by anti-progress zealots. Iâm sure they would
have seen sense in the end.

I was making substantially that point, ivan :
the âscienceâ weâre asked to follow is nothing to do with
science ;  itâs a system of beliefs.  Youâre right about the
solution :  proper education.  Î Î