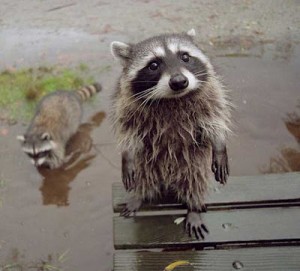 It is 30 degrees already today, predicted to be 36/38 by the afternoon and every day til Friday.

Ms Raccoon finds that her level of interest in whether gay Peers can call their ‘wife’ Madame or Lady; or whether Willie Wobbler holds a referendum or not, or whether disgraced Solicitor General Vera Baird is appointed Commissioner of Police, has wilted with the heat.

She is quite sure that you will continue to care desperately about these matters, but she has pi**ed off to the beach at Oleron with a pitcher of ice cold rose´, her most flattering swimming cozzie, and a big pan to cook the moules in…

She might have worked up some interest in Vera’s shameless pursuit of tax payer funded employment by then.

The laws (of Oleron) …….dealt mainly with the rights and responsibilities
of ships’ (=camper vans?) captains in relation to discipline, mutiny, pay,
cargoes, sickness on board, pilotage, accidents, and similar matters. I guess
you’ll have a relaxed holiday up there, keeping your lot under control. Enjoy
anyway.

Dear daughter in the Ardeche is sweating a bit at the moment. Nice for some
but unfortunately when M. hollande gets through with Gordon browning the
economy you ex pats might be like the people in Greece who are coming home
because they can’t afford to run the air conditioning.

Meanwhile for those of us left behind in Britain, it’s time for a bowl of
hearty broth before we don extra sweaters and huddle round the fire.

Obviously we here in Britain were seeing the effects of Global Warming, but
a stratedgy of increased taxes and public education has enabled us to reduce
our carbon foot print. This strategy must be working as we’ve reduced our
carbon emissions, and things are now cooling down well. 5 or 6 years ago we
used to get drought in the summer and terrible heat of 32C now we get rain and
14C.
I can remember 10 yrs ago the BBC pointing out the dangers of Global
Warming and how all our gardens would become too dry to plant anything other
than mediterrian hardy shrubs, and fourtunately we’ve followed thier advice
and we havent had to suffer terrible heatwaves of 32C and all the problems
that brings.
I would like a job at the BBC or The Guardian

Suffer Terrible Heatwaves? Speak for yourself. I love a bit of Global
Warming.

Try burning a bit more of they Fossil Fuels and generally being
selfish. Although I can’t say it’s working for me at the moment.

Actually your right, a nice V8 engined car might start to warm
things up a bit!
Imagine the BBC , apart from Top Gear,
convulsions

That’s a good idea. And what else can we do to hot the place up a
bit? But it’s no good asking me to get on an Aeroplane.

Bah. Here in Little Shithole by the Swamp it’s grey and foggy and damp, and
the heating has been on since midsummer.

If it wasn’t for your generous antifreeze donation I’d be too rigid to
type.

So many so close that I am going to call for a bottle of the landlady’s
finest. Well done all the avid google-mappers.

I can see Bruney; I had a home in Ranalagh, just outside Huonville; I
walk on the Adventure Bay beach as often as I can afford the ferry; but I
have settled on Mt Nelson.

Let me tell you a secret. I feed my birds on Sunflower Seeds. Then I
collect up the husks which inevitably fall, and spread them around plants. All
Slugs seem to like this detritus and eat at them on the way to the plant. They
then get fat and fall asleep. I’ve also got a suspicion that these husks are
difficult to crawl over.

You need to recruit a hedgehog or two.

I’ve also chucked the Hedgehogs over the wall, to stop the dog
tormenting them, and bringing them into the house. You haven’t lived until
you’ve had a Hedgehog Flea. But you won’t want another one, that’s for
sure.
So you see, my answer to the problem is Win, Win. Feed a
Hedgehog, and give a Slug a fighting chance. And I haven’t lost a plant to
Slugs or Snails in more than three years.

Blimey – that’s some dog if it can carry a hedgehog! I know what you
mean about hedgehog fleas, but have never been intimately aquainted with
one, fortunately, close though I’ve been to several of our small,
prickly friends.

Novel method of conservation, nonetheless. Sling a hedgehog over a
wall, then bombard it with slithery food. Still, nobody could call that
cruel – unless there’s a Royal Society for the Protection of Slugs and
Snails.

I don’t know how he does it but he’s done it several times, and it
ain’t much fun getting up in the middle of the night to find a
Hedgehog in the middle of the kitchen floor with the dog trying to get
it to play with him. As for my one encounter with a Hedgehog Flea, I
looked as though I’d got Bubonic Plague, and felt like it as well. But
they appear to be quite happy next door, and well fed, and I don’t
actually kill anything.
When I was a kid my Mother used to put salt
on Slugs, and then when she wasn’t looking I would swamp them down
with a bucket of water and then throw them into next door’s garden. I
think putting salt on them is so cruel. I’ve always been a bit
peculiar like that.

What have I done to upset you Ms Raccoon. Why do you torture me so here in
Hissingdown Towers, off Slugfest Avenue? I’m hurt, I tell you, I’m hurt! I’m
going for a lie down under my last remaining 100 watt light bulb!

Get out there with a torch and lob the Slugs over the wall. That’s what I
do. But I think I might have water on the brain because I am becoming
increasingly fond of the really big buggers that I find. I am even quite
gentle with them as I over arm them far enough to stop them coming back for
a couple of days. Although I have to say that it could be the same one.
Eek.

The big ‘uns are OK, I can handle them, but not literally! Its the
little keel slugs I hate; they make holes in me ‘taters!

I sympathise with the pic of that Raccoon. I must have looked like that
yesterday when the heavens opened as I was halfway to the village shop.

That is quite the most piteous raccoon I have ever seen, is someone
eating a cream cake at it?

Hope you packed your breathalyser.

It feels like it is about 38 degrees here, if we are using good old
imperial Farenheit not your ungodly foreign celsius stuff!

If it’s too hot for you, come to bonnie Scotland, where it has rained every
day for the last two weeks and looks set to rain every day this week, while
the temperature has never exceeded 13 degress and the midges are having a
field day.

Yes, endless drizzly rain and quite warm air have led to the midges
getting very excitable and over friendly down here too. Not as tough and
violent aas their Scottish cousins, I admit, but still a complete pest

Why does it always rain where I live? I instinctively pick wet places, and
if I move the rain follows me.

I am as far south as one can get without being surrounded by ice all year
around. It is cold. It is icy on my nearby mountain where the snow has been
falling on and off for a few weeks. But I can look forward to yet another
guaranteed lovely summer and beaches without another soul on them for miles
and miles. Just moi. And some small penguins. Meanwhile I am within a few
miles of charming restaurants that have wood fires!! Hahaha.

I too could be envious but apart from a few names of places there are very
few French folk anywhere around here. Admiral Bruni D’Entrecasteaux described
where I live as “the most beautiful harbour in the world where all the ships
of all the fleets could find safe refuge”.

A fine single malt awaits the one who can name where I am.

Dover? Or possibly Hastings? (No, not those ones. No penguins for a
start!)

He also said it was the largest harbour in the world. He was, of course,
wrong on that. Being French. Both Sydney and Halifax harbours are
larger.

Hahaha. Close, but can you sniff the malt? You need to get nearer.

Oh no, you said south. I’ve been malt testing myself and read your post
upside down.

Gotta be the Antarctic … ?

Oh I am green with envy! Will put my latest effort on hold, then. And stand
in the rain, looking forlorn..

Don’t rub it in! We’ve seen no sun for six weeks here in the frozen
north.
I hope you’ve blown into your new breathalyser and are wearing your
new high-viz vest.

Just been to the Auvergne, where the weather was wilting hot too

Moules? In July? I know they do things differently in France…

‘ a pitcher of ice cold Rose’. Have you tried the French on Pimm’s ? I
had to barricade the gates and raise the drawbridge once my Bulgarian
neighbours got their first taste of it !